First,  both weapons are SEMI-AUTOMATIC.

Second,  he had a weapon but kept it pointed towards the ground with his finger out of the trigger guard.  Sufficient for the situation (IMO).  He should take away her gun until she is similarly disciplined because she was waving it in all directions with her finger on the trigger.


My apologies. I don't know much about guns

I do however know which direction ground is :-) 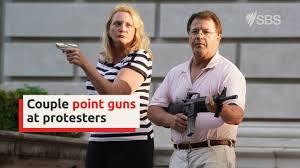 Where would that be?

IMO, people have different tolerance for risk and perceive different risks.  I’ve had friends armed to the teeth and friends abhorring guns and it doesn’t matter where they live.  I don’t begrudge that guy for having weapons nor for bringing them out (but as already stated, SHE was reckless.  My guess is that was about her first time holding it.)