Nice run today. Shoes felt good. Will wear these for long runs. Actually will probably just wear these all the time. I've always liked the Adrenalines. These felt decent.

Now! Off to work!

6:35 AM: Up early for a 30 minute run. My first since this weekend! Woooo Hoooo. Then Jana's party tonight.

Was going to swim this morning, but decided I needed rest more than additional swimming. Jana is still going to be here on Tuesday for the OWS. Will do that instead. She leaves Tuesday night. OK! Here I go... with the Adrenaline 7's! I'll give a full report when I'm finished. (I liked them. There, is that complete enough?)

In the Photo Flipper Today:

A cheerleading photo! This was March of 1986 when our boys basketball team went to state. This was our squad, before the game @ the University of Illinois Assembly Hall. Rachael, Allison, Michelle and I were Sophomores on the Varsity squad that year. It was such a cool experience.
I fell in love with the U of I on that trip and decided I was going to go there. And I did.

I don't think I was quite as fast without my visor.

Supposed to be Z 1 & 2... was probably more like Z 1,2,3ish. Couldn't help myself. Felt like pushing a teeny tiny bit this evening.

So, I don't think I'm going to put together a whole race report for that Steelhead thing. What I will say is the following:

RUN #1: Should have been a swim. Not a great runner, so instead of coming out of the front of my wave in a swim, I was shot out the back of my wave and into the next two waves in this run. I tried hard, but not too hard, because I didn't want to use up all my energy. My legs have a finite number of strides in them on any given day. That's just the way it is. Avg = 11 min/miles. Not awful.

T1: Pretty fast. I was warmed up by this point and ran to my transition spot, and only did half the job, apparently. Exited T1 still wearing my running visor under my helmet, and with a 20 oz bottle of Infinit jammed down the back of my shorts. As I ran, it snuck down my right leg, until I had to reach all the way down my shorts and pick it out. (While wearing a visor and helmet, mind you.) I need one of those behind the seat bottle holders.

BIKE: Had myself photographed from every angle fighting with my visor. That's delightful. Finally pulled over and took it off. Chugged my shorts bottle (all 20 oz) in the first 40 minutes so I could ditch it by the first aid station. Peed in a porta potty. Averaged 19.5. Could have gone harder. Was working on pacing. Seemed to go OK. Would have liked to have been faster. Probably could have pushed it a little harder and still had a good run through mile 8.

T2: Trix was waiting at my transition spot and she had to convince me to go out on the run. I was ready to just call it a stupid day. I finally agreed to go after much pouting on my part and cajoling on hers.  This was a slow transition. I didn't care.

RUN #2:  We laughed & harrassed other runners and had a great time through about mile 8. Then I started to get weepy and tired and irritated with myself. Trixie tried all of her trainer tricks and some of them worked while others made me hyperventilate. (

) Around mile 12ish I decided I REALLY didn't care anymore, so we walked most of the rest of the way. She peeled off right around the finish line. I crossed the line, got my medal from BAMBAM66 and sat down with a cold towel on my head. I vowed to never do another duathlon again.

In true Whizzzzzz fashion, I printed the workout at work and, of course, left it on the printer.

So I improvised. I remembered seeing parts of it...

7:42 AM: Dinner with the girls was fun. I had the best ((BEST)) sesame seared tuna salad. I channeled my inner dumpster and selected something off of the menu that had lots of protein and a fairly high nutrient content because of all of the colorful vegetables... red peppers, yellow peppers, carrots, etc etc. I ate the whole thing and was so proud of myself for making such a healthy (and delicious) choice, I nearly broke my arm patting myself on the back. I left my camera in Rachael's van. She is going to upload and email me the photos we took. And I will probably have to stop by her house to pick up the camera sometime later this week.

Jana's (swim coach) going away party is Friday...and I'd like to have my camera for that.

Me. Tall. Everyone else, normal sized.

Click HERE for more hilarity. It was what it was. Hilarious, frustrating, and just sorta not my day.

7:20 AM: Up early to fold some laundry... and get ready for work. Work all day, then meet my HS girlfriends @ Champps in Lombard for some dinner and a birthday celebration for myself and Rachael.

I have a REST DAY today! Yay!

That's the calm before the marathon storm. I'm considering doing Pleasant Prairie as a sprint next weekend. Just for fun. I'd like to have carefree race that goes according to "plan" at least once before this season is over. And it doesn't take much to planning to do a sprint, so I'm thinking that's going to be the ticket.

If Pleasant Prairie gets turned into a duathlon, the worst case scenario is a 3 mile run/12 mile bike/3 mile run. I can do that. Now I have a whole new angle to consider.... my races morphing into duathlons.

The most basic and rudimentary swim ever swum.

FWIW, my Steelhead swim cap finally got in the water today. Heh.

The muscle aches started yesterday. Hamstrings, and arms mostly, shoulders. Funny, cuz we didn't swim at all... I think it might be from being tense while running. Knee stiffness is getting better. ART today at lunchtime. Wooo Hoooo! Going to ask about getting some custom orthotics, they might help with my homegrown BUNION. (heh, thanks, Jazz!) We'll see what Dr. Fager says.

Am also going to start wearing my Brooks Adrenaline 7s for my long runs. The Sauconys, while I really do like them, are not good for more than 7-8-9 ish miles. That will not do for the marathon. I've always had good luck with the Adrenalines, but after they changed from model 5 to 6 they were not as comfortable. I tried on the 7s at the marathon expo last year and bought them, because they seemed OK,  but I have not run in them yet. We'll see how they do. I have tried every make and model of running shoe in an effort to replace those Adrenalines... and nothing has come close. There are alot of crappy running shoes out there, believe me.

Short self directed drilly swimmy today. 30 minutes. Was going to do it this morning, but it's storming. (Hey, that kinda rhymes!)

Tomorrow another rest day and dinner out with my HS girlfriends! Yay!

Photos from this weekend are available HERE . 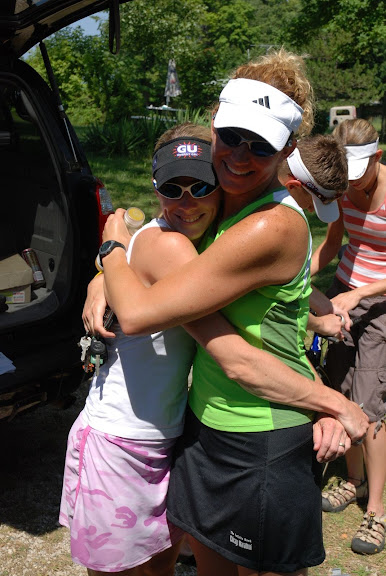 Consciously held back. Could have gone harder. Was being very conservative. Any time my HR felt high, I backed way off.

Concentrated on getting all my nutrition in, and making sure my damned visor didn't get in the way of my handlebars. Yep, I started the bike with my running visor on under my helmet. Took it off around mile 2 of the bike, and held it around my handlebars for the remaining 50+ miles.

I can't wait to see the photos.

Then started to falter.

Then decided I didn't care and walked miles 12 and 13.

First Godforsaken run. Should have been a swim!

But I did it. First run = not too bad. Bike = windy, but OK, held back so I could still run afterwards. Run = Meh. I was OK til around mile 8. (That's progress) Thanks to Trixie for running with me. I only cried twice and hyperventilated once. (All after mile 8) I don't know why I do that.  *sigh* Race report will follow. We've got a boat load of photos from the house, too.

Congratulations to Jazzy and Birkie on their Clearwater spots. Damn runner-types.