From Flabulous to Fabulous

The MICROSOECOND work got out I ran out the door...literally. Roy was meeting me at the mall, so I had a very sweaty blessedly warm run to the Everett Mall. We went to see Hulk. Not too bad and LOVE LOVE LOVE the Ironman tie in! There were some cute cameos too of Lou Ferigno, Stan Lee (the man is a movie whore, I think he's in every Marvel movie...as he should be), and Bill Bixby.

Had planned to swim but the movie was longer than anticipated, so we decided I could wait a day.

Walked to breakfast, then over to the sewing store to get some iron on letters for my marathon shirt. I want my NAME on my boobs, dammit! I want to hear "Go Tory!" a million times!

After that, hopped over to the pet store to get toenail clippers for Dash. Then over to the thrift store where I picked up a Nike running shirt, a cheap Nike golf jacket thing I can toss away at the marathon, and a funky yellow shirt that is very different. I like different 'cause I am.

Poor Dash. I really snipped one of his toenails too short. Blood, crying, tears. Poor Dude! I put a bandaid on it (Hello Kitty, thankyouverymuch). Funny thing is, he still has the bandaid on a few hours later. Dorky boy!!

Planning to kayak this afternoon. We're going to see our niece first, then to the lake.

Had a GREAT time kayaking this afternoon. We didn't get to the lake until 5 p.m. and as soon as I stepped in, I wished I'd gotten there early enough to swim with Vinette! The water was nice! Cold, but not too bad at all.

We enjoyed our paddle, though. Went twice around the lake and saw both a great blue heron and a bald eagle. We just stopped and stared at the eagle for awhile. I know they are more common now, but I swear I can never stop staring. They are SO gorgeous!

Tomorrow is my last day of school! Huzzah! Plan is to wear something I can run home in. Roy is taking m out to breakfast and dropping me off. I'm going to run to meet him somewhere (only five miles, not home), and then we'll see a movie. After that, we might stop off a the lake and swim. It was just so beautiful today! 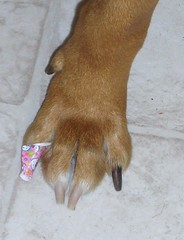 By about mile six I had feeling in my legs again. Good thing my feet were clipped in because I couldn't feel them AT ALL! My hands didn't do so badly. I had hand warmers in my gloves, so the main hand part was all good. One pinky didn't thaw until the run, though.

Nice ride around Mercer Island. I was intentionally not pushing it since um...I'm supposed to be tapering. Knees felt okay, not great, but okay. I refuse to be worried about that.

Got lost twice, so did a tad extra mileage. LOL! The second time Cheryl was right behind me and instead of going up Irving and turning left onto Lake Washington Blvd, I went straight across into the tunnel. Got to the other side and said, "This is not right!"

Oh well. I have the dumb.

I thought I'd cut it short in the Seward Park area so I went past the well marked turnaroud. I guess I didn't.

Run felt okay. Not great until the last two miles. I just don't find my mojo sometimes until the fifth mile! The last two were nice, although my body said "Hey, you said I was only running seven miles!" at mile 7 and wanted to slow down. Fortunately a good song came on.

Yes. That is 3 minutes and 34 seconds. That was all I could stand!

I was so ready to swim today, too. No nerves at all, except as we got closer to Seward Park. It wasn't swim nerves, either. It was "I thought it was going to be warmer and did that sign just say it was only 46??" nerves.

Holy mother of our dear Lord Jesus Christ our savior..it was cold. It made Moses Lake feel like a hot springs.

Of course I have only a sleeveless wetsuit, no gloves, no booties. The water temperature, according to their site from yesterday, was 53. That is just WRONG!

I got in and waded out. Okay. Cold. Very cold. My mind was still able to form single syllable words. Tried to acclimate. Yeah, that wasn't happening. So I put my arms in. One fell off with a thud. Reattached it and decided to start swimming. Noticed that my muscles did not respond to the order to "put face in water and stroke". Cheryl, in the meantime, is saying "YOu don't have to do this! If it's too cold, don't swim."

Well I wanted to at least give it the college tri. I finally put my face in (I think my nerve conduction had slowed to the point where it took a full minute to get from the "put face in water" order to the actual face-putting). I decided I'd swim back towards shore and if it was horrendous, I'd just stop.

Swam a few strokes. Okay, it's horrendous but I might be able to do this. Turned around and started swimming to the buoy when WHAMMO! Suddenly my head felt like I'd power slammed a Slurpee! I mean it was INSTANT brainfreeze!

I stood up so fast I think my face fell off. It was frozen, so I'm not sure.

"Nope! Can't do it! Is my head split open because I can't feel my brain?"

Waded back to the shore where I proceeded to try to change as quickly as my frozen hands would allow.

Why am I incapable of tapering?

Imagine if I actually DID taper!

Did some walking a the end (to cool down), but this just felt like a slodgy run today for some reason. Ankle was bothering me. Legs felt heavy. No idea why.

Got off work a bit early today (was allowed to leave as soon as the kids left), so I went and grabbed Roy and we celebrated his last day of school by running and biking (me run, he bike) to the movie theater and seeing "The Happening". I'd love to say it was a great movie, but I was disappointed! I love M. Night Shamallamamdingdong too!

Dinner must be done, the smoke alarm just went off setting off the Murphy alarm. He's running all over the house all cracker dog.

So sad about Tim Russert. Too young to die! I wonder if he knew he had heart disease? I wonder what his diet and exercise was like. That's so scary when someone just drops dead like that.

Okay really. I am slow, but I am NOT that slow. I was at a new pool this morning. Went to the Lynnwood Rec Center to swim. I knew it would be different, so I just decided to go with the flow.

Got in the slow lane first. Wow. Apparently slow means, "I really can't swim and I don't want to get my hair wet." That's okay. That's what slow lanes are for; new people who are just learning or re-learning to swim.

So I went over to the medium lane after one lap. It was actually two open lanes circle swimming. There were two older men in there who could barely swim. No problem. I don't need to go fast. Only it was SO slow it was frustrating because I found myself having to just stop stroking and float every 5-6 strokes. Then a lady got in and she'd swim a bit slower than my pace, but not bad (the men were resting), but then at the shallow areas she'd stand up and walk. Um...yeah, you have someone BEHIND you! You can't just stop and walk! I didn't know whether it was kosher to just go around her, so I'd stop and wait for her to swim again, then go. Finally after three laps of this I just went around her.

One older guy was obviously irritated that I was drafting on him so he'd stop at the end of the lane and with this look that could kill would wave me on like some irritating little gnat. Yeah Dude, I'm going to miss swimming behind you and your moobs. Sheesh! I mean be patient people! I certainly was being patient (on the outside) with them!

Then there was one heavy set guy who would just stand at the end of the lane for literally 5 minutes at a time with a pull buoy between his legs. Yick!

I know it's always strange going to a new pool. People have their territorial thing going and it's hard to find just where you fit in. I figure I'll just go with the flow for the first few times I go there and figure out where I fit in. It looks like MWF there are two med lanes open, so next time I'll grab the other med lane and see if that's more serious swimmers. Not that these guys aren't serious, I'm sure. Just that I'm there to swim until I'm done, not swim. Stop. Chat. Walk. Hump the pull buoy. Chat. Hang out. Whatever.

The fast lane looked like high school boys who WERE fast, so I know I don't belong there.

How did I get so many country songs on my iPod?

Feeling MUCH better today! My fever broke about 8 p.m. last night. WHEW! I slept pretty well, even with my afternoon nap. Got more sleep than I normally do, in fact. Woke up feeling about 90% and well rested this morning! Slept with Jim Dale last night. He is great in bed. ;)

Okay get your mind out of the gutter! I listen to books on my iPod while I sleep. It drowns out the snores of the various men in my room (two dogs and a husband), and the loud purring of Pixel the Motormouth. I listened to Harry Potter and the Prisoner of Azkaban last night until my iPod battery died.

Damn. I am NOT feeling good at all this morning. Woke up feeling great. Even was playing with the dog. Suddenly I could feel aches creeping into my shoulders and a pain in my abdomen...pancreatitis! I had hoped that this was going to be a thing of past! It's been awhile since I had a bad bout. But today feels like it might be a doozy coming on, and I just don't feel like I can miss work. At least it's the end of the year and I don't have to do much. Have 1000 mg of ibuprofen on board. I didn't have a fever when I left for work. So maybe it'll be short and intense. (Or better yet, short and NOT intense!) I have to coach tonight so I don't have TIME for this!

Stoopid pancreas. No fair to get pancreatitis when I don't even get to DRINK to get there!