A brief history on aero bar evolution with a review on the bars that I own and love.

I would like to tell you about my favorite set of aero bars, ever! First, I would like to give a short history lesson on the aero bars I have used, and how things have changed. I have been ridding for fun with aero bars since the early 90's, and racing in triathlons for three seasons now.

My first set of aero bars were made by Scott. At the time they were pretty much all you could get. They were the classic "r" bend ski-tip style bar design (not to be confused with Vision Tech's R-bend...'Racing bend'). I started using them because I was training for century rides and wanted a different position to ride in on long rides. Aerodynamics were secondary to me at the time. The problem I had with these bars was their one-size-fits-all mentality. To adjust them, you needed to cut them. They had a spacer between the two bars that kept them a fixed distance apart. At 6'1" and a large frame overall, I was always pulling my shoulders in to ride in this position. Because of this, I was not able to get good air exchange in my lungs, I got sore shoulders, and I could not maintain the position for more than ten minutes at a time.

As time progressed, and I added bikes to my collection, my choices and options in aero bars changed. In the mid 90's I upgraded my bike and put a new set of aero bars on the new ride. A new player called Profile had entered the market. Their new bar allowed adjustability in the length of the setup, as well as some width adjustments. The bars slid in and out, kind of like a trombone. Better yet, the arm adjustments allowed me to set my arms out a little further or in tight, depending on what I needed. These adjustments were great! One of my few complaints at the time was how secure they felt. The bars never seemed to be tight enough. Hit a hard bump and they would move, no matter how tight I tried to get them. It was not like I would crash with the movement, but I had to adjust them again and again.

Fast forward to 2006. Last year I bought my first new ride in over a decade. Aero bars were going on my bike. When purchasing the bike at a trusted local bike shop (LBS), I talked to the salesperson and asked for advice on the "endless" number of choices. He suggested going to one of the newer "S" bend bars. I asked about the change in bar styles. He informed me that the "r" bars were all patented off of the old Scott design. The patent was about to expire, and manufacturers were still trying to get the last few dollars from their investment in the patent. The "S" bar design was new. It had an advantage I did not see at first. They allowed the rider a better way to grasp the bars while climbing. As soon as he said it, I realized I had always gone to the drops on my road bikes when climbing. It is very hard to hold an "r" bar and pull up on them to aid in climbing. The "S" bars allowed the rider to take advantage of the leverage in their design.

With that in mind, he showed me a set of Profile Design T2+ clip on aero bars. I fell in love as soon as they were test mounted on the bike. For me, the adjustability was key. The two separate bars yielded a few improvements that were immediately evident for me. First was the ability to adjust the width of the bars to fit my shoulders. I could now breathe freely when riding, even at race pace. The other advantage was each bar relied on itself for support. My older bars used the two together to help keep it in place. The added security also allowed me to pull up hard on the bars when climbing. Another reason I loved these bars was the large and adjustable arm rests. They were very well padded. More importantly, I could mount the rests before or after the drop bars on the bike. I was able to find a position that allowed me to ride comfortably for long periods of time.

These bars seem short compared to some of the others on the market, but there is a reason for it. On a tri bike set up, to go aero, the whole idea is to get low and forward. The center of gravity on a tri bike is designed much further forward than on a road bike. To go that far forward on a road bike would decrease the rider’s stability by moving the center of gravity too far forward. The type of bar to choose depends on the type of bike and riding ability. These bars also offer the option to put bar end shifters on instead of the ones on the brake levers.

To me the T2+ aero bars are the most versatile and cost effective aero bars on the market today. For those whose weight is an issue, the T2+ also comes with a carbon fiber option called the T2+ Cobra. I like these bars so much I bought a second pair to mount on my trainer bike in the basement. Whichever aero bars you choose, you are sure to enjoy them once you get used to them. 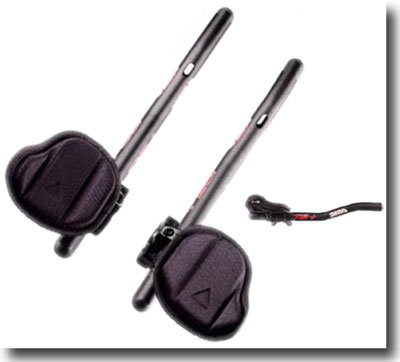