Everything you want to know (and then some).


Beginnertriathlete.com's philosophy is to make healthier people and to promote an active lifestyle throughout the world. Triathlon is that perfect lifestyle. In a fast-paced world where available personal time is short, stress runs high and lifestyle preventable diseases are on-the-rise, BeginnerTriathlete.com is transforming the unhealthy to the healthy, the couch-potatoes into athletes. With a large library of articles, a superb training log, a busy online forum, great members and several dozen training plans, BeginnerTriathlete.com has all the necessary tools to provide people with the information and motivation to get out the door and begin training today.


We currently have 360,000 registered users, and average of 600,000 monthly unique visitors with 1.7 million monthly visits encompassing about 4 million average page views per month.


Ron Shea began BeginnerTriathlete, and originally oversaw all of its aspects, from publishing articles to implementing new ideas for Training Logs. The history below was written by Ron, although BeginnerTriathlete is now currently owned by Alice Foeller.

Here is a little history on how beginnertriathlete.com got started and who some of the other help are. Thanks to all for making this a great site!

The site started years back under a different moniker: 'Mind, Body and Soul' - a horrible banner-ridden-free-tripod site. It was very crude and my first experience at this web stuff. It was basically an ode to my first triathlon and some tips. Plus I needed a topic for a website. 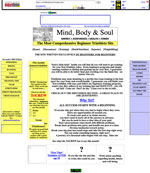 I leisurely started adding sections and a unique couch-to-5k program and a sprint based on what I had learned and experienced. The site never had a forum back then...well, it had a very horrible 'Frontpage' generated forum - a post a week maybe. Nevertheless, encouraging emails kept the evolution going, albeit slowly. I just got married and started my first 'real' job and also started grad school. I also have to give thanks to a few key links from other sites...looking back, I don't really know why 'Mind, Body and Soul got any links - it was totally newbie-ish. But then again, back then - everything internet was new.

I soon had a few people requesting to write. A guy named Freddy and my mom wrote some articles and then Michael Pate ( www.whenbigboystri.com ) approached me. That was too cool! Someone with a book! Scott Herrick (sherrick) has also helped me out a lot with donating the time to write the heart-rate training articles and several training plans.


Early 2003 I came back from the chemistry lab at work for lunch.  I hopped on to Mind, Body and Soul and it said, "The site has exceeded it's daily visitor quota, it will be back online in several hours."  Yikes!  Time to upgrade.  This is when I then was required to choose a domain name for the upgrade. 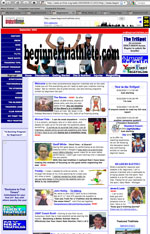 In Spring 2003, we switched from Tripod to a .asp platform as I created some training logs via Frontpage and had 20 users using them. I always am one for functionality. It was very time consuming and cumbersome as I had to create each one. This is also when we changed names to Beginnertriathlete.com as Mind, Body, Soul was taken in every form possible. I started publishing monthly content at this time.

Soon after, I found this forum software and set it up. It was slow (not a lot of posts - a big room with nobody in!) I had no grand plan for the site, just still messing around. Every week there would be a post or two and I would be like, "Cool! A post!" I did a lot of research back then on many posts as I did not and still don't know everything. Lara_SD came on to the forum in 2003 sometime and has been a regular. She is quite resourceful and has helped answer a lot of posts - same with Michael Pate. I then decided I wanted to integrate training logs with the new webhit 'blogs' and this forum - something I hadn't seen done yet but it sounded like the coolest idea.  Just imagine looking and commenting on your friends training log! This is the first time I had to actually dump huge amounts of money into the site for programming to do this. Lucky for you, I roofed for about a month on the weekends to save up...not to mention convincing the wife that credit card debt is good - everybody has it. It was totally worth it though. 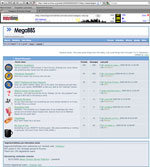 Durning Christmas 2003 Malvey came on the scene as our motivational writer. He is awesome. Enrico (smeeko) has donated several training specific articles too...many thanks. Plus we thank 'The Steves' and many others for content. Right before vacation in Christmas 2003, I decided to up-the-ante and get serious as people's wonderful success-story emails just fueled me. I decided to come out with some olympic programs and more sprints - kind of a choose what fits your lifestyle - plus a redesign. It was December 2003 when the forum started taking off. I guess new design, training plans and New Years resolutions provided just the catalyst. Needless to say, vacation Christmas 2003 was no vacation at all - lots of late nights in front of the computer screen for two weeks.

All through early 2004 we came out with more new log features. I was addicted to programming and new stuff. The anticipation still kills me. We came out with detailed race reports at this time.  Lara_SD helped me immensely on testing the software before we went live...many thanks. Also several others contributed to crucial elements, bug testing and comments  - thanks to you! We also added the 'directory' at the top for addition of links. About 20 people have helped put in links to fill it up this year, notably Kgart, dhlundblad, cameronw, Tri-Wog StL, Pro_rider, royj, geoffs, shaundeane, Machiavelo, snikpos, robbertcj, Pro_rider and more.

Ljschicago(askmrsbt) has contributed some monthly articles on a new editorial concept. Soupaman has donated some time to get some new 'skins' and graphics in the forum for our old site - thanks to him too.

As the forums grew, we started recruiting moderators...well, many of them asked on their own to help.  We have a lot of moderators now to help keep the forums spam-free and in the tenor and spirit that we like and are known for - nice and friendly! Thanks to the moderators: ADollar79, BikerGrrrl, Comet, D001, dalessit, DerekL, jmk-brooklyn, jneugeba, kaqphin, MikeTheBear, milaminute, rkreuser, Silver_wlf, Socks, sportyj, the bear, tinkerbeth, Tri Take Me Away and TriAya.

Everybody who has helped had done so on donated time - many thanks again.


In 2011, based on a very large binder of user survey information, I decided that we needed to do a REAL redesign - one where we focused on the user experience. We, for the first time, hired a graphics firm to do all of the graphics - gone are the days of using templatemonster.com!  Up until then, every feature was bolt-on as I didn't think BT would ever be where it was in 2011.  Our user interface got more and more complex with tons of links.

In late 2011 I started working on the crude template of the site to then hand-over to the graphic designer.  In the first half of 2012 we found a graphic designer that a few of our advertisers used, LubashaDesign.com, she started churning out pages...dozens and dozens of them.  I was on the phone with her weekly helping her understand features and functions.  In the summer of 2012 we had a programmer turn her graphics and pages into CSS to then give to our programmers.

All late 2012 and early 2013 our programmers worked feverishly.  Not only did we change the interface that users see, we updated a lot of decade-old backend code.  It was a monumental task.  As a user myself, I took it for granted just how big BT is as far as pages and features.  IT'S BIG!

We released the new site late May 2013 - almost 10 years exactly after we first became beginnertriathlete.com.  As expected of such a large endeavor, we had bugs and glitches.  The first two weeks, the programmers slept little.  Two months later most bugs were worked out and we are now pretty optimized.  I thank everyone for being so patient, but politely pushy on some things that you honestly didn't like.

This redesign saw us hit a record 910,000 unique visitors in July 2013 - only two months after our initial launch.

In late 2013, a mobile version of the site was launched.


In 2018, after completing the purchase of the BeginnerTriathlete from Ron, Alice Foeller hired a graphic designer to create a new logo for the site to modernize our branding and make the logo more about the joy of our athletes crossing the finish line, rather than the technical aspects of our training logs. This logo was added to our social media presence, email newsletter, website and apps.

Thanks to all of you for making BT a welcoming, unique place. Beginnertriathlete.com's philosophy is to make healthier people and promote a active lifestyle throughout the world. All of your support is getting us to our goal.