Athletic individuals in general are prone to upset of both the upper (esophagus, stomach, small intestine) and lower (small intestine, large intestine) gastrointestinal tract. Normal physiologic processes are altered by moderate to intense exercise, which, in turn affect other processes secondarily. Some of these disturbances can be simply bothersome, while others can affect health and performance substantially. A good working knowledge of one’s own normal function under different levels of activity, combined with an understanding of modifiable factors, may help improve function and prevent health consequences. We will discuss two of the most common gastrointestinal issues, reflux and diarrhea, and give suggestions to prevent or treat symptoms.

Gastroesophageal reflux (GER) is a common complaint amongst athletes. Symptoms include fullness, bloating, belching, nausea, regurgitation, and heartburn. Symptoms tend to be worse with exercising after eating, more intense exercise, conditioning in the early stages, and in runners. Exercise relaxes a band of muscles at the junction between the esophagus and stomach called the lower esophageal sphincter (LES).

Swallowing of air during exercise tends to increase pressure from the stomach toward the esophagus. Decreased blood flow to the organs during exercise slows emptying of the stomach and small intestine, while at the same time decreases the production of protective secretions. All these combine to increase reflux. Use of non-steroidals such as ibuprofen and caffeine can worsen these symptoms. Besides burning and general discomfort, GER can worsen asthma, cause wheezing separate from asthma, and cause chest discomfort due to irritation of the esophagus. 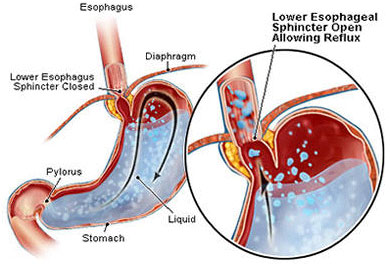 Diagnosis of the condition should be made by an experienced sports physician. Modifying your training, habits, and possibly using medication may all help to control symptoms. I suggest you try each of these suggestions one at a time, thereby gaining the greatest benefit with the least alteration to normal routine. Advance your training intensity smoothly, allowing your body to adapt to the new stresses. Wait three hours after eating before exercising, and avoid caffeine and non-steroidals. Try hydrating before exercising to avoid ingestion of air. If these changes are not sufficient, a trial of a proton-pump inhibitor medication such as Prilosec is warranted. The side effects are mild (headache, abdominal pain) and rare. Avoid antacids, as they can cause cramping.

Diarrhea is one of a constellation of symptoms experienced by endurance athletes. Cramping, urge to defecate, increased bowel frequency, increased gas, and diarrhea are all experienced commonly. As the name implies, symptoms tend to be worst in runners. The exact mechanisms are not known, but theories include increased transit time, fluid shifts, hormonal changes, decreased blood, changes in how the nervous system functions, and dehydration.

Mechanical irritation from movement may help explain why runners experience more symptoms than other activities of equal intensity. Fluids are absorbed out of the colon at slower rates when blood is diverted to muscles used for exercise. This effect is made worse by dehydration. In prolonged activities, tissue may be destroyed due to lack of blood flow, leading to bloody diarrhea. Toxins produced by our normal bacteria are absorbed from an intestinal wall surface made more permeable by decreased blood flow. Absorption of these toxins is thought to contribute to the cramping, pain, and nausea.

Symptoms tend to decrease as your body adjusts to increased demands, so smoothly increasing your workload is important. Evacuating your colon with a bowel movement, especially before long endurance events, may ease symptoms. Decreasing the fiber in your diet, especially when increasing intensity and length of training, may help decrease symptoms. Anti-diarrhea medications should generally be avoided because bacteria-produced toxins stay in the colon for longer periods, they can cause fluid shifts, and can decrease perspiration.