"All I've ever ridden was Shimano.  The new Scott I'm looking at comes with SRAM Rival.  I know there is a difference in the way you shift but any other gotchas?"

The question today is about differences in performance and maintenance with SRAM's Rival vs. Shimano 105 group sets. Many readers on this site are new to triathlon and may be riding road bikes instead of aero bikes. On a road bike you’ll be shifting with the integrated road and brake levers on the hoods, while on a tri bike you’ll be shifting out on the aerobar extensions. We’re going to focus on the tri bike component group differences.

SRAM Rival actually sets-up quickly and easily. Once the front derailleur is set to it’s optimal height and angle it will shift without issue. The crankset is slightly more flexible than Shimano’s. Most people of average height and weight starting into triathlon may never notice this difference at all. If there is a measurable difference in flex between the cranksets the actual real world power loss is neglible. On average you’ll get more power loss from flexion of the frame and spokes in your wheel set.

When I read about Shimano 105 on internet sites it’s often noted that the cost and weight of the 105 is more than SRAM’s Rival, which is a valid point. During triathlons we are not trying to save weight, we are trying to cheat wind drag and get to the run hydrated and prepared to run powerfully. The small difference in weight we’re talking about will not impact race day performance.

The Shimano 105 crankset is stiffer due to the chain ring design. This enables better power transfer to the road. Shimano’s bottom bracket is also smoother as the seals aren’t as tight as the Rival system. The rider will experience less frictional loss in the pedal stroke. After a few months of riding however the Rival’s seals break-in and this becomes a non-issue.

If using SRAM’s Rival for the purpose of triathlon with ski tip extensions on your aero bars, like the Carbon Strykes by Profile, I would recommend switching the shifters to SRAM’s Force for adjustability at the lever. This will put the shift blade in your personal power zone for easier shifting of gears. The Rival option has one set point like Shimano. If hand strength or ergonomics are important this could be a deciding factor for riders.

Both of these systems are very reliable. Replacement costs are very affordable should any piece be damaged. We've seen great longevity with both group sets. Shimano 105 has for a very long time held the market as the most affordable race drive train on the market. It has always performed well. SRAM is aggressively challenging this.

On a Road Bike

If you are using road shifters instead of the time trial shifters there's a larger difference in the group sets. Rival offers lighter shifters with fine tuning for the brake lever and an individual lever for the ergonomic shift lever to bring it closer to your hand and not interfere with the brake lever. This is much better for smaller hands as the shift lever follows the natural arch the hand creates during the shifting phase. 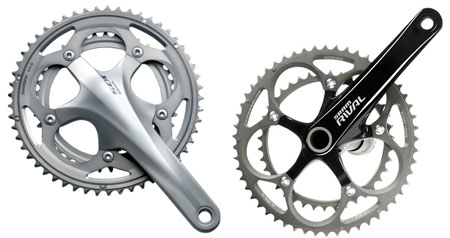