A Walmart bike, a borrowed road bike or a new carbon fiber bike? You don't need to break the bank for your first triathlon bike.

Many new endurance athletes just entering the sport feel pressured to buy an expensive bike in order to enter a triathlon. Of course the bike shops and cycle companies would like you to believe you need a high-end bike, too.

You certainly will go faster on a time trial bike than a 15-year-old mountain bike, but if you enter a race on that rusty Schwinn that’s been hanging in your garage, you won’t be the only one. We’ve interviewed several veterans of the sport. For a few, a competitive time trial bike was the first set of wheels they had owned since they were a kid. But most rode for months, if not years, on mountain bikes, borrowed road bikes and otherwise modest wheels.

Many triathletes have amusing stories of racing on bikes no one would categorize as fast. A good friend of mine completed a sprint triathlon on his girlfriend’s mountain bike with a wicker basket on the handlebars because his road bike was totaled when a driver rear-ended him on the way to a race.

For my first triathlon bike, I borrowed a friend’s mountain bike because it was newer and lighter than the Huffy I received in 1994 as I went off to college. Unfortunately I didn’t understand how to work quick-release levers, so I had to keep stopping to raise the seat up. I would pedal and pedal until the seat slowly slid back down onto the seatpost, then I would stop again to raise it up. It’s funny now, but it was frustrating at the time.

After I realized triathlon wasn’t something I would only do once, I bought a used road bike from a swimming buddy for $300. It didn’t fit very well, but it was a real bike with clipless pedals and aerobars, and I was thrilled.

It wasn’t until 10 years later that I put some real money into a carbon fiber racing bike. Even then, I bought it used from an eBay seller.

Read on for proof that a $2,000 bike is not a requirement to participate in triathlon. A $20 bike may suffice for quite a while. 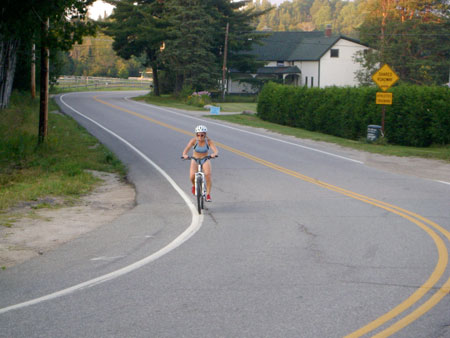 “It was REALLY fun climbing the hills,” she joked.

Byers caught the triathlon bug and purchased a road bike before her next race.

Melanie Hoff of Falls Church, Va., completed four triathlons on what she describes as her “trusty 1994 Trek 1200 commuter bike.” She didn’t bother to take the luggage rack off the back for two of the races. (See the photo below for proof.)

“I finally got a new bike just three weeks ago for next season,” says Hoff (BT Member Hoffsquared). 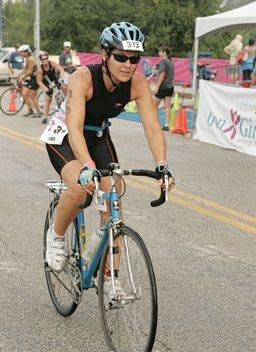 "I did my first 3 sprints last year on a 1982 Raleigh Rapide which was given to me by my cousin,” says Stavros Carayannis of London, U.K. (BT member sicone).

“I would probably still be on it if a car hadn't turned in front of me, knocking me off my bike,” he says. “However, once it was repaired, I did the first two races of this year on it but bought myself a Felt S22 with the insurance payout in June, and haven't used the Rapide since.”

Although we would never advise someone to go bike shopping at a department store for a triathlon bike (a yard sale or pawn shop would probably be better!), a BT member recently became a triathlete on a $100 Walmart special.

Randy Lisle, of Houston, entered his first triathlon with a Walmart bike.

“While I finished the course, I was passed by EVERYONE on the bike.  I think I averaged around 11 MPH on a 12-mile course.  My favorite pic from that race is me on the run course, alone, with others walking their bikes back to the cars in the background,” says Lisle (BT Member NewClydesdale). 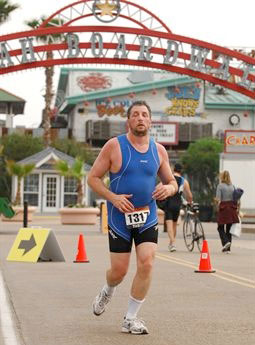 “After the race, my wife, who ended up with a DNF, said "I want to try another one, but we are getting new bikes."  My answer was, "Hell yes.”

Lisle and his wife bought new road bikes that same day, and were so excited they even road 16 miles, even after just completing their first triathlon that morning.

The bike or the engine

It’s a common theme among triathletes that a new bike isn’t necessary, but it is likely to be faster and more comfortable. It’s usually about the “engine” (your training) and not the bike, but if you avoid your cycling workouts because you hate your bike, it might be worth the investment sooner rather than later.

Jason Brunner of Houston completed his first triathlon on his wife’s Trek mountain bike. “I bought a Scott road bike after that for $500 to see if this was something I really wanted to do.”

“I did Sprints, Olympics, and my first half ironman on my road bike. This past February I bought my tri bike and am glad I waited because it makes me appreciate it even more,” says Brunner (BT member JasonWB). 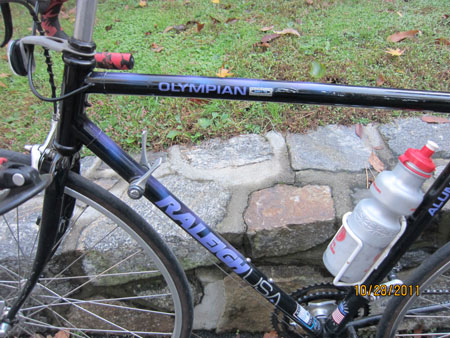 Gil Herzberg of Larchmont, N.Y., passed plenty of people on an old bike that isn't much to look at.

Herzberg (gzh6464 on BT) tried a triathlon for the first time last spring, at the suggestion of a friend.

"Seeing as I was a decent swimmer, knew how to ride a bike, and had done 5Ks before, I said OK. I finished several sprints this summer and my first century ride on my 1990 Aluminum Raleigh Olympian with my shifters on the down tube," Herzberg says.

"Needless to say, I passed lots of people on the bike leg with far more expensive and "real" rides than me," he says. "I'm thinking of "upgrading" -- or should the term be "updating" -- to a more modern bike before next season when I'd like to try an Olympic."

New out of the box

Although these are common experiences, there are folks who buy a premium tri bike as their first ride. I have several workout buddies who all decided to attempt triathlon at the same time. They are established in their careers and their kids are grown. They went to a bike shop and asked for whatever kind of bike people use in triathlons. Where I have an array of bikes I’ve worked my way through, from my steel Huffy to my Felt B2, one friend has a single set of wheels hanging from the rafters: a Cervelo P2.

BT member Megan Rocker of Oakdale, Minn., (mmrocker13 on BT) has a short story. "My first 'real' bike was my tri bike; bought new, at the LBS [local bike shop] ... before I had ever done a tri."

"I figured, I was planning on doing some tris," Rocker says. "Even if I didn't like them, a bike is a bike, and it would be nice to have it."

Brittany Meeks, who serves in the military and is usually based in Texas, is another example of a triathlete who went from no wheels to race wheels.

Meeks was training for a marathon in the desert of Iraq, using long runs as a stress reliever. A friend proposed the idea of a triathlon, and Meeks knew cycling would be her weakness.

“I started thinking about it more, and lo and behold, I found this site called ‘BeginnerTriathlete.com.’ I started reading it, I set up a page and was logging my runs and workouts, and I was reading the great Texas forum where everyone was talking about all of these great races,” says Meeks (Texas MP Gal on BT).

Meeks became hooked. Two weeks after returning to the states, she was walking out of a bike shop with a 2007 Q-Roo Tequilo: aluminum frame, carbon fork, carbon seat post, Speedplay pedals.

“Those first few rides were harrowing cause those tires were so skinny! I did some zero mile per hour crashes due to clip-in pedals. I bought a trainer. And I just started riding,” she says.

“I wasn't so sure I liked the biking leg much, even after completing my first triathlon in March 2008.  But then I did a Quarter Iron race and something clicked...and I loved the bike.”

Meeks completed many races on her bike, which she named “Juan Tequilo,” including Ironman Arizona in 2009.

“I did upgrade in 2010--and ought to sell Juan--but it's hard, cause he was such a good friend during those first 2.5 years of cutting my teeth in triathlon!”

Still, there are plenty of stories of people who started with a bike budget of $0 and stuck to it. 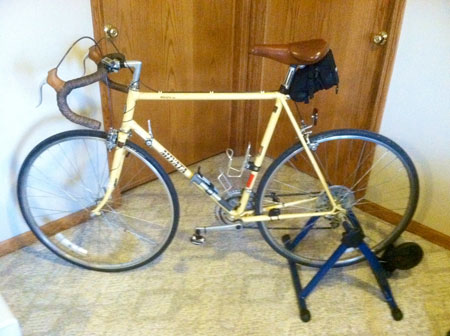 Andrew Hedges of Dorr, Mich., finished his first season of triathlons on a 1979 Myiata 710 that was given to his wife.

“I'll probably use it again next year, too, or at least until I can max it out on speed,” says Hedges (Ahedges on BT).

His is a common strategy among new triathletes. Unless they are at a very high level of fitness, it’s probably not the bike that is the biggest limiter. Once a triathlete has a high level of bike fitness, an old, heavy bike can become a liability.

Beth M., of Southeastern Connecticut (BT member trirific), had the perfect starter bike: a circa 1978 Fuji road bike. Unfortunately she gave it away a year before her first triathlon. So she borrowed her sister’s mountain bike.

“It’s a nice mountain bike, but slow as molasses on the road,” she says. The next year she bought a Trek 1000 road bike, and then a triathlon bike the year after that. 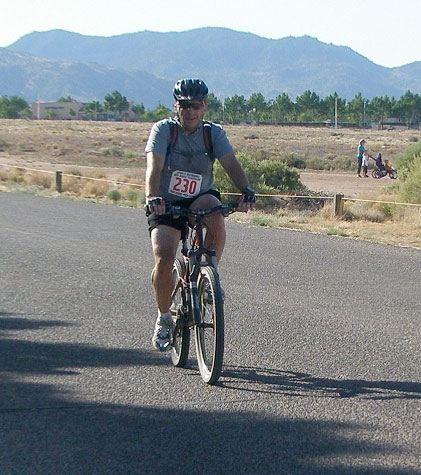 Jay Kabler of Albuquerque, N.M., thought his first triathlon would be his last.

“I bought a nice mountain bike to train on for my first triathlon. My thinking was that the tri was just a "bucket list" item and I would only be riding trails for recreation after that that,” says Kabler (BT member RockTractor, pictured).

“I fell in love with tris after my first race and did an off road tri on my mountain bike later that year. Realizing where I was headed, I bought a used road bike before the year was up to race tris on the following year,” he says.

Duane Rice of Fort Meyers, Fla., has a story typical of many who are balancing other family priorities with a limited triathlon budget.

“I started with an entry level road bike, and one-and-a-half years later, I still ride it.  I have completed in numerous sprints, couple Olympics, three half-ironmans and will be completing Ironman Florida this month,” says Rice (DuaneRice on BT).

“I'd love to have nice tri bike but need to balance where our "fun" money goes.”

Andy Rosebrook of Royersford, Penn., biked his first seven triathlons on one of two Glacier Bay mountain bikes from Target. “The bike was about 30 pounds with a steel frame, fat studded tires, reflectors, platform pedals with no toes cages, a kickstand, and a big gel seat cover,” Rosebrook says.
The pair of matching bikes was purchased, along with a child’s bike for his son for a grand total of $40.

“After doing a sprint with a 20-mile bike leg, I finally decided I needed to upgrade before my first Olympic and bought my first road bike,” he says. “I added some clip-on aerobars 3.5 years and two Ironmans later, and upgraded to a tri bike after another year and a half.”

“No matter which bike I had I still enjoyed the ride!” says Rosebrook (SouthwestMBA on BT).