HITS Triathlon Series is a national triathlon race company that has taken the sport by storm, putting on events in New York, Arizona, California, Texas and Colorado in its second year.

The company specializes in events that feature, as they put it, “a distance for everyone.” HITS races allow entrance to register for triathlons that are less than a third of the distance of a standard sprint, all the way up to a full iron-distance race.

Race director Mark Wilson is the engine behind this triathlon machine. 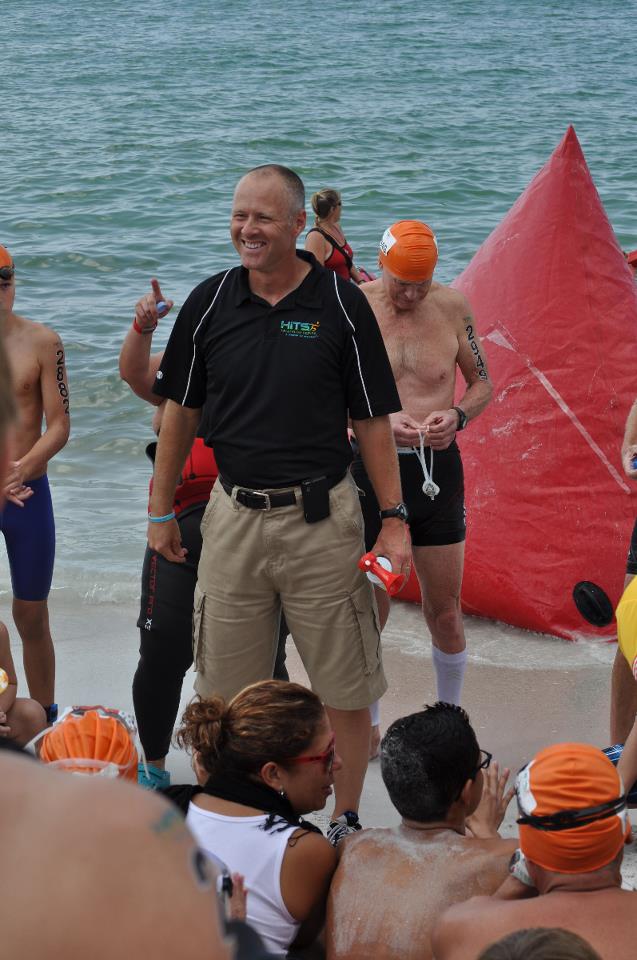 The company, HITS, existed for 20 years as a horse sporting event company, organizing equestrian events. “The triathlon series started because the owner of HITS found me as a triathlon coach,” says Wilson. “As we were getting to know when another, we decided to start a national triathlon series. Why not? So that’s what we’re doing.”

Wilson brings an endurance athlete’s joie de vivre and obsession with detail to the race series.

“At the athlete race meeting, I give them my cell phone number and I tell them to share that with everyone in their family. If another athlete has a cell phone, and an athlete is down, they can call and now I know,” says Wilson.

“Let’s say they gave the number to their family member and an athlete goes down, now the family member sees someone who is not their athlete, and they call. That guarantees that the person is getting help,” he says.

“Even if you have a flat, you can call.”

Now we hit Mark Wilson with the series of questions we’ll be asking several race directors this year:

“It’s basically for the athletes’ protection. It’s the police officers that cost so much money,” says Wilson. “Depending on the venue it could be city police, county officers and sometimes state police. It’s $80/hour, and our event lasts from 7 a.m. to midnight, and we need seven police officers … you do the math.”

Wilson says the cost of flying race staff to the venues, and feeding and housing them in hotels, adds up as well.

Wilson raced Ironman Lake Placid seven times, and in his best race, he went under 11 hours. But he says directing the events is even harder, and there’s no chance to sleep the night before.

Wilson says it’s next to impossible to figure out a way to avoid plastic bottles, disposable cups, and other waste during a triathlon. He focuses instead on minimizing litter.

“One thing is to educate the athletes that we’re setting up trash bins after the aid station so you don’t have an excuse – so we can keep the garbage in the right spot. It’s impossible to go out over 120 miles and find every wrapper,” he says. “I give them a big speech about how disgusting it is to litter. You should not be throwing your crap out on the course.”

“When I’m thinking about how to set up the course, I’m thinking where is the family going to be? I’d rather have them stay put, than to be driving around on the course,” Wilson says.

“It’s my job to make sure everyone stays close but to have a good time. When mom comes and dad’s racing, the kids can race one day and mom and dad can race on different days.”

Wilson says now that the company is seeing more success, they have to give more thought to the growing number of spectators and where they can be so they can cheer on their athlete.

However, he says, “We want the excitement. We want the people who mean the most to them in the picture in the finish line.”

“There are not 50 people coming across the finish line all at once at my races, so until we get there, I’m going to encourage that joy at the finish line.”

“It’s getting harder and harder,” Wilson says. “People get piled up on one another. Especially on flat courses.”

Wilson says better education of course marshals helps, but he has more radical ideas, too.

Wilson says those who are drafting at high speeds are different types of athletes than those who might be stuck in someone’s draft zone at 16mph.

“Hopefully the sport will get so big we will have categories. And you can only race within your category. I think that’s a way to keep the skill levels in the same grouping,” he says.

Wilson also advocates for women racing women and men racing men, even if they are on the same course at the same time. This would prevent the problem where a female tries to pass a male athlete and he speeds up while she is in the draft zone. There is currently no legal way to exit the draft zone, except through the front, by passing. Women have often argued this rule is unfair, because they may be physically unable to overpower a male athlete who had slowed down but suddenly accelerates in order to avoid being passed.

“There’s a joke I do at the start of the Saturday race, about five minutes before, I will say, ‘How many people did not make the meeting yesterday? OK, five minute penalty!’ I know there are some who are not going to come,” Wilson says.

“At the start of the race, people get stupid. They can’t hear you. You have to repeat things a million times. I’ll just stop and be quiet, and MAKE them listen to me. I will not speak over them. I will make them listen to me. And at least they’ve heard me once,” he says.

“You do the best you can, but there’s going to be someone who swears there wasn’t an arrow at that turn.”

Wilson has a surprising answer to this question.

“It’s my job to lead the movement, and the movement is CARE,” Wilson says. “It’s not just saying that you care, but actually caring. The bigger anything gets, the more difficult that becomes.”

“When you were the first person going to Starbucks, that person across the counter really cared about you. You were #1. Now that you’re the 20th person in line … not so much.”

“I remember everyone’s name. By me being that example, the rest of the staff picks that up,” he says.

“If an athlete comes up to me and is concerned, and I blow them off, that doesn’t feel good. And that ripples down,” says Wilson.

“My intention is to make sure they’re safe. We do a little prayer before the race. Whether there’s a god or not isn’t the point. The point is that we are stopping to say, God, keep us safe! It means something to me.”

“That makes a difference.”

Wilson says his own example and the staff climate is the first level.

“The second level is physical people being there. We have kayaks, jet skis. I also prep the athletes and tell them what to do. Roll onto your back. Our kayakers will see you on your back. Don’t wave your arms up and down because you’ll sink.”

Wilson makes sure there are officers at every turn to stop the cars. He makes sure aid stations are stocked. And he designs out-and-back run courses, to increase the chances of someone seeing an athlete in trouble.

And once again, there’s his cell phone number.

“I don’t even race anymore because I’ve committed my entire life to helping other people become triathletes.”