Triathlon - Make It a Goal for the New Year

The start of a new year is a good time for inspirational stories of the sport of triathlon being a force for good—physically, mentally, athletically and socially—in the lives of many.

These are not the stories of professional athletes.

These are the stories of men and women with fulltime jobs, of husbands and wives, and of moms and dads.

In a recent poll on BeginnerTriathlete.com, members were asked how triathlon had positively impacted their health. Members responded with several categories of improvement, encompassing medical issues, social circles, athletic prowess, mental health, and weight loss, along with some just plain goofy answers.

Of the 3,162 responses to the poll, 537 recorded a medical improvement, with an additional 282 specifically citing weight loss. 243 members responded that the sport brought them more friends, and 487 cited some improvement in athletic performance or injury reduction. An astounding 1,284 voted for improved mental health.

For many BeginnerTriathlete members, such as Mike Stevens of Grand Rapids, Mich., triathlon and the BT website have added to his success across the spectrum: Increasing his athletic performance, learning about triathlon gear, and meeting new people.

“It's hard to separate triathlon from BT since so much of what I get out of triathlon starts with learning things on BT,” says Stevens, who goes by the username TriMike.

“BT is the place where people can ask questions and get tons of feedback on things that is invaluable, and the speed in which you get feedback allows you to start testing and applying things you learn right away.” 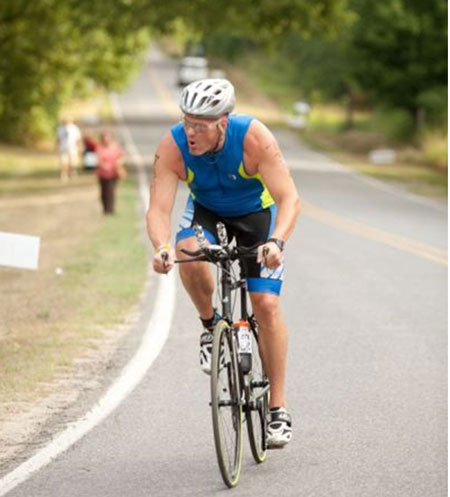 Tollefson also credits triathlon, and specifically BeginnerTriathlete, with events that led to him meeting the woman he married two years ago, BT member lkct1234 (Lisa).

Many beginner triathlon stories are not those of race victories, but of health victories.

Not the least of these is the story of Larry Fisher of Norwalk, Ohio, who goes by Quasimodo on the BT forums. Fisher weighed 300 pounds last New Years Day. His heartrate at rest beat with the same speed as some athletes during an easy workout: 96 beats per minute. At age 40, his blood pressure was sky high. With four kids to raise, he decided to make a change.

By the end of March, having changed his eating habits drastically, given up alcohol and begun running and biking, Fisher decided a Racine Half-Ironman was the kind of big goal he needed to keep his amazing gains going. He joined a BT mentor group, starting working with a swim coach, and signed up for the race.

“I finished in seven and a half hours, and it changed me!” says Fisher. “It's been nine and a half months, and I currently weigh 191 pounds (15 percent or so body fat), my resting heart rate is 42, and my blood pressure is usually around 120/70.  Oh yeah, I don't have asthma anymore either.”

“Triathlon has given me something to occupy my obsessive personality in a positive way,” he says. “I don't sit around and think how good pizza and beer are.  I've gained confidence, energy, and a new passion for life.” 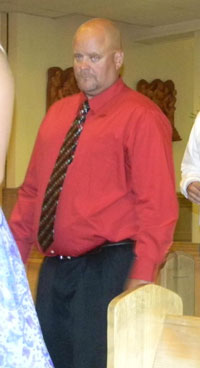 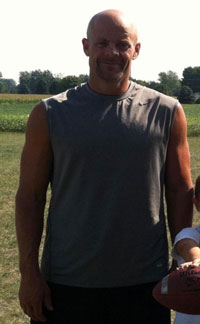 Quasimodo before and after

Others have similar stories. Their weight loss may be less dramatic, but the effects on their lives is no less intense.

Matt VanHoosier, of Bridgeton, Mo., started his triathlon career at least 50 pounds heavier than he is now.

VanHoosier worked with a lot of fitness-minded folks. They were runners, but not the fast kind that intimidate new people.

“Once I told them I was a swimmer in high school and they immediately started talking about how I could complete a Sprint triathlon. ‘Not a freaking chance!’ I told them,” says VanHoosier. But he realized his response was a defense mechanism to avoid what he knew he was able to do. When he shared the idea with his sister, she became very excited and he knew she wouldn’t let it drop until he did it.

“I’m very excited to see what I can get my engine to do next,” he says.

Dan Raeke of Lafayette, Ind. (username draeke) made a similar journey from unhealthy eating and no exercise to becoming a triathlete. He lost 70 pounds.

Jim Warren of Shawboro, NC, says for him, triathlon has been less about weight loss and more about feeling like an athlete.

“Triathlon has given me a way to say, ‘Yes, I have a gut.  No, I'm not a small guy.  I have finished triathlons!’” says Warren, whose BT username is SpeedKnight.

Warren, who is 6 feet tall and weighs 235 pounds, adds, “To me, triathlon is a means of showing to the society that we live in, that one does not have to be rail thin to be happy, active, or ‘in shape.’ ”

For Michael Raby of Gold Canyon, Ariz., completing his first triathlon made him realize that he had the power and discipline needed to finally kick his chewing tobacco habit.

“This sport has given me a lot of motivation to finally flush what tobacco I had left and vow never to touch the stuff again,” says Raby (BT username GetWetinAZ). “I know that the tobacco was holding me back, so it had to go.  So I guess you could say that triathlon has helped me take my life back from nicotine.”

“Mental health-wise I have never been better.  Happier, less stressed, just all around feeling good,” he says.

Better mental health is rarely a new triathlete’s goal, but it frequently becomes the most important side effect.

Karen Rayle, who lives in Saigon, Vietnam, took up swimming and was talked into a triathlon by some of her swimming friends. She had been unable to continue her habit of daily running because of back problems and the extreme heat in Vietnam. But without the daily run, her mental health was suffering.

“I'm an extremely high-energy person and, unless truly ill or exhausted, go nuts without a daily workout,” says Rayle (Hot Runner on BT). “I start to climb the walls, can't focus on anything, get insomnia, and lose my temper. My body won't take daily running so triathlon training lets me mix it up and get in a good workout almost daily.”

Of course one aspect of good mental health is having strong friendships. For many on BT, the world of triathlon has been a portal to new, true friends.

“I have so many more friends both locally and in a nationwide network,” says Emily Waitz of Hopkins, Minn. (username BikerGrrrl). “I think that's amazing. I really attribute that to BeginnerTriathlete.com specifically and not triathlon in general.”

For some, it’s one specific friend who stands out.

“I have made some great friends through triathlon training,” says Kristen Woods of Auburn Hills, Mich. (username hamiltks). “And I met my (now) husband at a tri training event on Valentines Day 2010. I can't imagine my life now if I hadn't found an interest in endurance sports.”

Woods and her husband just welcomed a baby boy this past October.

For still other athletes, triathlon has allowed them to remain athletic despite injury, or made them more well-rounded and competitive. Of the members polled, 80 said triathlon replaced an all-running regiment with something more balanced. 296 said they were more sports-balanced in general, and 28 said triathlon helped them find their limits and exceed them.

Tom Wilson of Oak Ridge, Tenn., was a steady runner, but began to experience a lot of overuse injuries about 12 years ago. He started riding an exercise bike in place of some running workouts, and then began swimming as well.

What I do looks like triathon training, but I never actually felt the need to enter a race,” says Wilson (username tech_geezer). “But, I have stayed injury free mostly for about 12 years.” 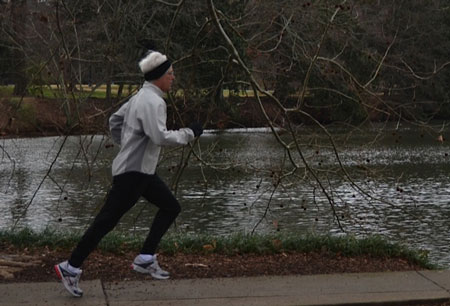 If you are new and just made that New Year resolution to get healthy or compete in a triathlon, hear are a few beginner training schedules to start getting ready:

Start getting fit and losing weight in the New Year with our beginner cycling program. This program can get you fit and ready to then start any of our sprint or olympic triathlon training programs.

This part of the program focuses on utilizing the bike for cardiovascular exercise and moderate strength training for low-impact training-especially good for starting out and/or having weight to lose.