A few weeks ago I tore the MCL and ACL in my right knee and the LCL in my left knee in an accident. Can I returned to triathlon? What would that entail?

A few weeks ago I tore the MCL and ACL in my right knee and the LCL in my left knee in an accident.  MRIs verified MCL and ACL tears are complete, the LCL tear is 'nearly complete' (90%).

I'm currently in PT for the MCL tear trying to get that healed up a bit before ACL reconstruction surgery.  Then the plan will be LCL reconstruction on the left knee at some point after that.

Can I returned to triathlon? What would that entail? At 42, I'd like to think a return to triathlon is possible, but wonder if I'm kidding myself.

Based on your question, it sounds as if you already have a certain diagnosis.  For those that have a knee injury that involves instability, medical providers typically utilize a thorough history and physical exam, combined with utilization of imaging to arrive at a diagnosis.  It is not uncommon to obtain standard x-rays of the knee that you might be familiar with, but also some less familiar x-rays such as stress views to further evaluate the remaining ligament function.  Often these will be taken of both knees for comparison.  High field strength MRI is a useful tool in addition to these other components, both for evaluating concurrent injuries as well as surgical planning, but often the stress x-rays are needed to determine how severe a ligament tear may be.

Stability of the knee is quite important in triathlon, and is normally maintained by the bony structure of the knee, the surrounding musculature, and the ligaments.  The ligaments most known for stability include the anterior and posterior cruciate ligaments, medical collateral ligament, and fibular collateral ligament.  There are several other supporting structures that contribute to overall stability but are not as commonly known.

The anterior cruciate ligament (ACL) is critical for maintaining stability of the knee during twisting, pivoting, and cutting activities, but less so with straight-ahead running. It prevents forward sliding and rotation of the tibia (shin bone) relative to the femur (thigh bone).  It is typically injured in non-contact settings by twisting the knee with a planted foot, or jumping/landing on a flexed knee. When an athlete sustains an ACL tear, the knee can actually partially dislocate and cause either the cartilage at the end of the bone or one of the menisci to be torn, so it is important that these structures are carefully evaluated.

The posterior cruciate ligament (PCL) is the strongest ligament of the knee. It is less commonly injured, accounting for less than 1/6th of all knee ligament injuries.   It allows the knee to flex, but prevents both the hyperextension of the knee and the backwards sliding of the tibia relative to the femur. It typically requires a large amount of force to be injured, such as a knee striking the dashboard in an automobile accident, when the knee is suddenly and strongly forced into hyperextension, or when falling hard on a flexed knee. Because of this, more than 90% of PCL tears involve other knee ligaments as well.

The medial collateral ligament (MCL) is the most frequently injured of all the knee ligaments. Luckily, it usually, but not always, heals by itself. It is located on the inside of the knee, and normally prevents the knee from buckling inwards, but a direct contact force to the outside of their knee can overstress and tear the ligament.

The lateral collateral ligament (LCL), or fibular collateral ligament (FCL), is located on the outside portion of the knee. It has a similar but opposite function to the MCL, normally preventing the knee from buckling outwards, and can be injured with a blow to the inside of the knee. Its function is to prevent gapping of the knee when a force is applied from the inside of the knee.  Athletes with an FCL injury will commonly complain of side to side instability, and a complete tear rarely heals without surgery. 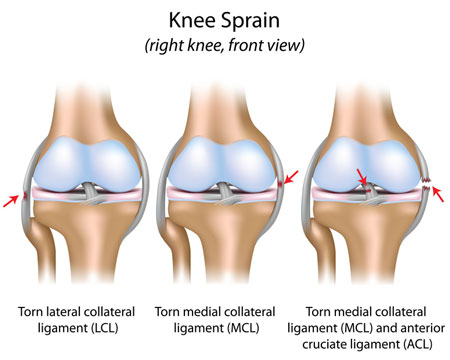 Treatment options vary based on which ligament is injured, or if multiple ligaments are injured in the same knee.

In a knee injury that involves complete tears of the MCL and ACL, treatment generally begins with six weeks of conservative (non-operative) treatment to see if the MCL will heal without surgery.  The focus of treatment during this time is range of motion exercises, thigh muscle activation, and swelling control.  Fortunately for the triathlete, this can be accomplished using a stationary bike with minimal resistance.  The range of motion on the bike closely approximates the range needed for healing, helps with muscle activation, and helps control swelling.  After six weeks, the MCL is evaluated for healing. In the unusual case where it is has not healed, it can be repaired or reconstructed (replaced) at the same time that the ACL is reconstructed with grafts from your body, or from that of a donor.

Your additional FCL injury makes the decision making more complicated. Complete FCL tears are typically addressed surgically within three weeks of the injury because they rarely heal by themselves, and waiting longer can make the operation more difficult with scarring of the tissue. An isolated partial FCL tear may heal with a six to eight week trial of non-operative treatment similar to that for MCL tears, with bracing and avoidance of significant twisting, turning, or pivoting activities. If the knee is stable after this time period, operative treatment of your FCL may be avoided. Because of these different treatment pathways and how they may affect the treatment plan for your other knee, it is very important that the severity of your FCL tear and its associated instability is determined by using a good clinical exam, MRI scans, and stress x-rays. This is best accomplished by a physician experienced with FCL injuries. They are less common than ACL and MCL injuries, and their evaluation and treatment has only recently been studied in depth.

In a knee injury that only involves the FCL, is associated with instability, and has greater than 2.7 mm of gapping when compared to the unaffected knee on stress x-rays, operative repair is indicated.  This is typically accomplished using a graft of the hamstring to replace the defective ligament.  One other consideration to be noted, in patients who wait more than three months for surgery, if there is an abnormal alignment of the knee (varus or “bow-legged”), it must be correct prior or during the procedure or the reconstructed ligament has a higher chance of stretching out, resulting in loss of stability.

Rehabilitation for any of these conditions typically consists of an early phase, which addresses swelling, range of motion, and reactivation of muscle groups.  Once these goals are met and healing has occurred of graft placement, focus is then turned to strengthening.  Final stages of rehab are focused on return to sports specific motion.

Efforts are underway to determine the best way to prevent non-contact ligament knee injuries.  ACL prevention programs have proven effective in non-contact injury.  These often include exercises such as dynamic stretching, hip and core stability, and plyometrics. Example programs include PEAKc, PEP, and KIPP.

The short answer to your question is a qualified 'yes.' Provided that you have an excellent surgeon, and a top notch rehabilitation program, the injury complex you describe should allow a full return to participation in triathlons. The expected duration of recovery would range from 12-24 months depending on staging of surgeries before your full return to triathlon training.

Best wishes for a speedy recovery, and look forward to seeing you at a swim start!

Dr. Michael Cassat, M.D. is a primary care sports medicine physician for The Steadman Clinic.  Located in Vail, Colorado, he provides expertise in the non-surgical treatment of athletic injuries. Dr. Cassat focuses on fitness, prevention, and a rapid return to activity.