Revolution3 – or Rev3 as the race company is better known – is based in Centreville, VA and produces many Olympic and half-iron triathlons, as well as some adventure races and one full iron-distance race at Cedar Point in Ohio.

The company announced its first race in 2008, taking the bold step of offering a generous prize purse for professional triathletes. At the same time, the company wanted to be known for its special treatment of first-time triathletes and its consideration for athletes’ family members.

Its inaugural event was held at Quassy Amusement Park in Connecticut, and attracted pros and families alike.

Rev3 Founder Charlie Patten, who can sometimes be found answering questions from BeginnerTriathlete members here on our forums, said his race company came about as a way to return the fun to triathlon. “When I started participating in triathlon it was about just doing the race, then it became about doing it a little faster, then it became about doing it even faster and before you knew it I was out riding my bike while my kids were playing soccer games,” says Patten in a video interview. “I think that was kind of the moment where we realized that the sport of triathlon doesn’t have to be that way, it can be about family, friends, just enjoying yourself.”

But the person we really want to talk to is Eric Opdyke, Rev3’s race director. Eric is going to bravely face the series of questions we’ll be asking several race directors this year:

“It’s funny because we get people who email us and they have no clue about the costs. They do the math on the price multiplied by the number of racers and they think it’s all profit,” says Opdyke. Racers don’t remember to factor in the cost of paid staff and police.

Opdyke says Rev3 has large transportation costs because, instead of renting tents and bike racks and fencing, they bring their own.

“We own most of our own equipment. It costs a lot to transport it around the country,” Opdyke says. He says it is worth the cost to have Rev3’s distinctive branding, a “grandiose” finish line with a Jumbotron, and such niceties as Rev3’s transition setup. The company commissioned its own distinctive bike parking in the transition area. The racks are flat on the ground and hold the tire, giving the athlete more space. Each tire rack has a nameplate with the athlete’s name and race number. 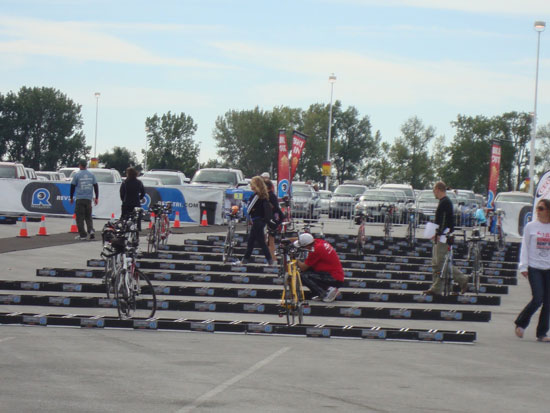 Reliance on volunteers is critical and necessary, but having the staff to manage them and retain them year after year is the only way to make it work, he says.

“We believe that to produce good races we need good people,” says Opdyke. “We don’t rely on volunteers to operate in key positions. We pay people good money to work on our team. Our races are the same people with the same equipment producing the same race, just on a different course. As a result, we fly people into each race.”

There are many line items in the expensive budget that contribute to race costs.

“But if I had to pick one item, it’s no secret, it’s police – traffic control,” says Opdyke, identifying a common thread among race directors we’ve interviewed.

“There’s a lot of waste at these events,” says Opdyke.  “When we order Dumpsters, we order a trash Dumpster and a recycling Dumpster. We try to work with each local community because each of them have different recycling standards.

Unfortunately, Opdyke says it is difficult to avoid some items. For example, the waxed paper cups are not recyclable, but Gatorade provides them as part of a sponsorship deal, and to purchase biodegradable cups and forego the free cups is an expense the company cannot absorb.

“We’re having a huge problem in littering alone, and that’s an environmental problem,” Opdyke says.

To curb the problem, Opdyke has been working with USAT officials to put some eyes on the run course, an area traditionally free of course officials. Opdyke is having the run course staff act as officials and write down race numbers and associated information for runners who litter, and handing it over to the officials for penalties.

“One of the most important parts of our business model is producing an event to be family friendly,” says Opdyke. “We go into every event thinking we are producing this event for the whole family.”

Rev3 hosts many of its races at amusement parks or other family entertainment venues.

“Cedar Point is a perfect example. It’s built around families. Whether you want to ride the rides or hang out on the beach or play golf, or go to Kalahari a few miles down the road,” he says.

“Athletes say, ‘Wow, there’s finally something for my family to do while I’m racing.’”

Sometimes Opdyke admits the interests of the family can trump those of the athlete.

For example, on the two-loop iron-distance course at Cedar Point, athletes come all the way in right next to the finish line before starting the second loop. It can provoke mental anguish for the athletes to see the finish so close and yet so far away, but it gives families a chance to see their athlete without driving around for miles.

“Families are going to stay where they’re close to concessions or close to a bathroom,” Opdyke said.

In their Busch Gardens, Va., race, the run makes continuous loops through a three-mile course, which can be tedious but also is packed with spectators due to the layout.

“Like any rule system, there’s some subjectivity to it,” Opdyke said. Individual officials make judgment calls to determine what is a penalty and what isn’t.

“I think that in the true sense of it, nobody likes to be penalized. Your natural reaction is to say, ‘No I wasn’t.’ We don’t hear people come back and say, ‘Yeah, I deserved that.’”

Opdyke said he thinks USAT does an “amazing job” training their officials and he has few complaints.

The main concern is making sure no one receives an unfair advantage. He said he doesn’t mind at all if the water temperature is measured in a shady spot that makes wetsuits legal on a hot day, because that tends to create a safer environment for everyone.

“I’m Ok with the rule system. We support the USAT rule system. What is confusing is that WTC has a different rule system,” he says. Opdyke said obviously ITU rules are different, because the races are draft-legal. But excluding ITU, he feels the other races should all follow the same rulebook.

Opdyke said Rev3 has tried many different tactics to make it as easy as possible to review the athlete guide. They used to create them as pdfs, but some people couldn’t download large files. Now they are digitized in a way that can be viewed on the website.

The race company has considered not giving athletes their chip until they have attended the race meeting, but so far has not implemented that requirement.

“I tell people you have an advantage if you come to the meeting and because you read the guide,” said Opdyke.

Opdyke said the purpose of the guide is for safety, and nothing is foolproof when it comes to safety. 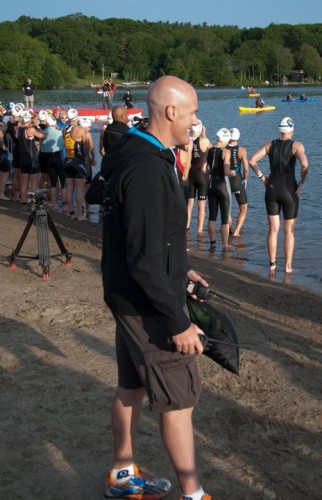 Opdyke said Rev3 recently had an experience at their Williamsburg race that led to more soul-searching on safety questions. The water looked completely calm from the short, but at the turn buoys, there was a fierce current and a few dozen swimmers couldn’t fight it and had to be pulled from the water because they couldn’t swim hard enough to get past the current.

“Should they have trained more? A lot of these people got out and said, ‘You pulled me from the water!?’ And we say, ‘Yeah.’

“Well, they want to bike and run. Do we let them? Do we take their chip? We’re exploring these questions and answers as a company,” he said.

Opdyke said the company has undertaken several new safety initiatives, including purchasing standup paddleboards for lifeguards, and a jet ski.

“We partner with professional triathletes and we’ve asked them to produce swim safety articles,” he said. “We have a swim clinic with a professional athlete the day before the race.”

Another unusual tactic is allowing athletes to warm up in the water while prior waves are being sent off.

“In the past we would make everyone get out as soon as the first wave goes off. But it could be an hour before they start,” Opdyke said. “We feel like this helps prepare them physiologically better by having them warmed up before the adrenaline starts, and contact starts happening.”

Opdyke said the swim receives a lot of safety attention because that is where triathlon as a sport has experienced the most fatalities. However, while answering questions for this interview, news was coming in from two weekend races in July where athletes died during the bike portion because of collisions—one with a parked car, and one during a bottle exchange.

Opdyke said both cases were tragic, but as a race director, he’s not sure anything could have been done differently.

Opdyke did say that technology is on the horizon that will help athletes feel safer on the bike course and help them receive help more efficiently. GPS tracking paired with an alert system is currently in use in the trucking industry, and could be applied to triathlon.

If an athlete stopped moving on the bike course for more than two or three minutes, race staff would be alerted. An athlete who stopped to help would be able to prove what happened, and have the time restored to his or her final finish time. An athlete moving at slower than 10mph on the bike course could generate an alert to the sag team, since someone going that speed is likely walking or running with a bike with a mechanical problem.

“We really provide a first class service with athletes. We train our volunteers in transition to know everything about the transition area. That’s where the athletes have all the questions. They want to know where is this, what’s the water temperature? We don’t want the volunteers to say, ‘I don’t know, I’m just a volunteer.’”

Opdyke says during one race in Connecticut he was standing in transition with staff and volunteers early in the morning. The race had started and everyone was in the water.

“All of a sudden a tire pops. Boom! I grab all the volunteers and I said we’re going to find this bike and we’re going to change this tire before this person comes out of the water,” he said.

Opdyke said it was hard to find the bike with the flat, but they changed it and the athlete never even knew they had a flat.

“To me, that’s what sets us apart. People take ownership,” he says. “That’s my ultimate ideal vision.”