I have an ongoing problem with Plantar fasciitis (PF). A running friend of mine had heard that raising your running cadence is a good way to ease PF?

I have an ongoing problem with Plantar Fasciitis (PF). It's not super serious at this time - it doesn't stop me running but I certainly have to manage it - stretches, icing, orthotics etc. I don't get pain when I run but it's pretty sore afterwards. A running friend of mine had heard that raising your running cadence is a good way to ease PF. The logic is that your feet hit the ground with less force and it's therefore easier on your feet. Certainly I have a pretty low cadence - around 83 - so trying to raise it is maybe a good idea anyway (to run faster!).

Diagnosis: The diagnosis is typically based on a good history of the pain, followed by a physical exam. Patients typically complain of pain in the early morning, often claiming of a sharp pain with the first step in the morning, but it can come on with prolonged sitting as well. The location of the pain is typically the under surface of the foot along the anterior and middle portion of the heel (technically referred to as the calcaneus). The pain typically abates after walking for a while, but can return, especially late in the day (1). In athletes, warming up often alleviates the pain, but exercises like sprinting and jumping can make it worse (2). Some of the associated risk factors to think about include running, obesity, excessive foot pronation, leg length discrepancies, occupations that require prolonged walking or standing, or a sedentary lifestyle (the latter not typically being the case for the triathlete obviously). Imaging, such as x rays, ultrasound, or MRI are not typically needed, but may be helpful if the diagnosis is unclear, or the pain is resistant to treatment (1).

Cause: Plantar fasciitis is a bit of a misnomer. The term “itis” technically refers to a process that causes inflammation. In this pathology there is no actual inflammation, and, in fact, it is a degenerative process thought to be brought on by repetitive microtrauma to the tissue (3). The microtrauma is typically brought on by activities such as prolonged standing or running (1).

Background: The plantar fascia is a band of connective tissue that works to support the arch of the foot. It connects the bones that form the “balls of the feet” (technically the metatarsal heads) to the anterior portion of the calcaneus. It is technically a ligament as it connects bone to bone, as opposed to a tendon which connects muscle to bone (3). 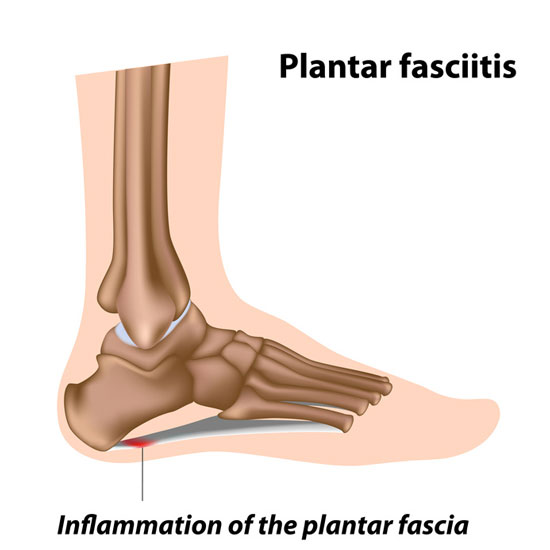 Treatment: The vast majority of plantar fasciitis improves with patient-directed therapy such as rest, activity modification, ice, stretching (the plantar fascia as well as the calf muscles), acetaminophen, or nonsteroidal anti-inflammatory drugs (NSAIDs). With prolonged symptoms not responding to conservative treatments, other more intensive therapies include night splints, taping, orthotics, and physical therapy techniques like eccentric stretching, iontophoresis with steroids or acetic acid, or deep massage. Physician directed therapies may include steroid injections, injections with platelet rich plasma, whole blood, or Botox (1). Other possible treatments include shock wave therapy, and in severe cases surgery can be considered (3).

Cadence: Determining cadence effects on injury is a difficult task. In general, an increased cadence leads to a shorter stride length, and the heel striking more under a runner’s center of mass. From above, activity modification is recommended to help treat plantar fasciitis, but that is not clearly defined in research found. Activity modification could mean walking instead of running, but it could also be interpreted to mean something like an increased cadence. Research does exist to suggest that an increased running cadence (10% above baseline) can significantly decrease lower extremity energy absorption at the knee and hip, but not the ankle. Basically, this means that the hip and knee joints are taking less abuse. The energy generated with both a 5 and 10% increase in cadence above baseline was shown to decrease at the knee and ankle joints, but not the hip (4). Thinking about these statements, one can say that an increased cadence results in decreased pounding, as well as decreased energy need, and in theory this could lead to lower injury rates in the lower extremities. Unfortunately, there is little research to support the theory at this time. One article found, supports decreasing stride length to help to reduce the risk for tibial stress fractures, but this was a very small group of athletes tested and is by no means definitive research (5). Specifically, there was nothing found relating plantar fasciitis to increased running cadence.

Prevention: Prevention of injury means addressing risk factors. Risk factors can either be intrinsic, meaning they are innate to the body, or extrinsic, meaning they happen outside of the body. Intrinsic factors include leg length discrepancies, overpronation, high arches, flat feet, among other, and most of these are hard to modify. More modifiable risk factors are extrinsic, and they include flexibility, overuse and training errors such as too quickly increasing mileage, intensity, duration or frequency of workouts. Speed workouts, hills, and plyometrics place particularly high loads on the plantar fascia. Regularly changing out footwear is also encouraged (2).