If you can't win with power or stamina, win with smarts 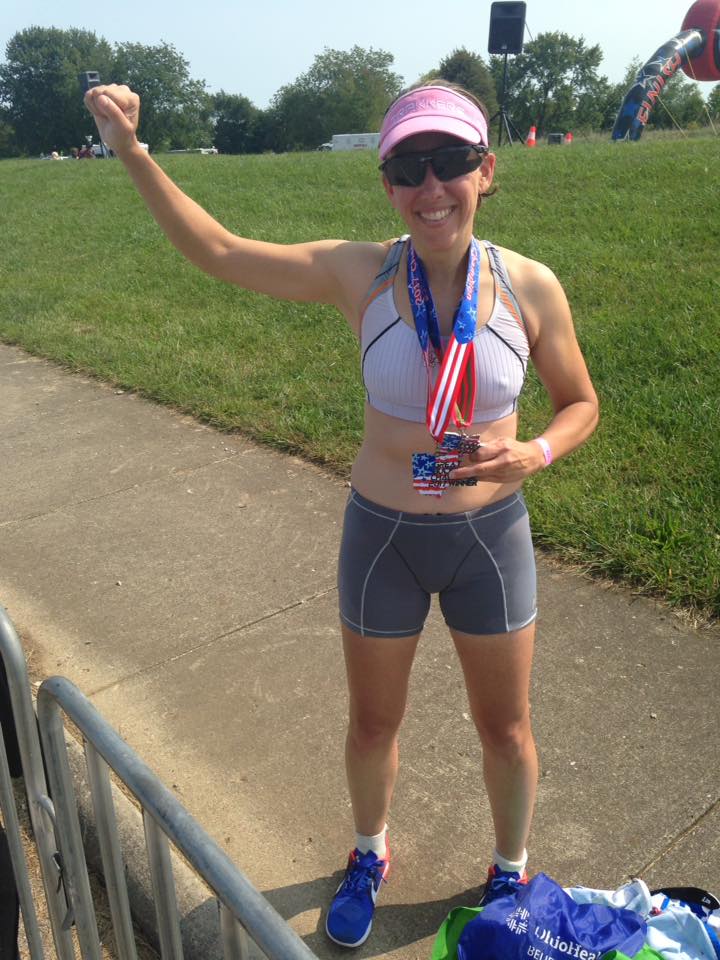 Those of us triathletes who are smaller, less powerful, or aging a bit often feel racing is a losing battle against our younger selves. I've learned smart training, educated planning and wisdom on the course can be powerful factors in age group results, even when put up against speed, power and long legs.

This summer I trained for a September half-Iron race. Of my many workouts, I spent one or two sessions per week training with a neighbor of mine. We'll call him "Roger." He is a lot taller than me, a little younger than me, male, and faster in training on the bike and the run. I really wasn't planning to compete against him. Despite his dismal swim speed (he refuses to put his face in, and has chosen not to seek coaching or improvement, trusting his swim leg to a special version of elementary backstroke he invented) I was confident he would beat me at most any distance. When we biked together, I was gasping to keep up. When we ran together, he would stay with me for a few miles, then take off and circle back for me later.

A few weeks after we met, Roger asked what I was training for. Then a week later he told me he had signed up for the same race. Fine. Then he started pressing me for my goal time. I said I thought finishing the 70.3-mile race in less than seven hours would be good for me, given other constraints on my training and the fact that I'm a 41-year-old woman with a slight build who has never been strong on the bike.

The major differences between Roger and me is that I was following a training plan (from the Custom Training Plan Creator here on BeginnerTriathlete) and I rode the bike course alone two weeks before the race. There were other differences, too. I had identified a clear "A" race, and everything else was secondary. I completed a sprint during the summer because friends were involved in the sponsorship. I was planning to do the marathon in October. But I knew what my primary race was, and my training plan was geared toward that. Roger completed several triathlons and running races during the year, but didn't have them prioritized.

I knew I would pass Roger on the swim, but I also anticipated the feeling I would have, knowing he was behind me and catching up with me on the bike course. I even thought about the short out-and-back section where I might be able to gauge how far behind me he was on each of the two loops. I tend to race pretty well when I know I'm being hunted, but I was still sure Roger would catch me on the bike and leave me in the dust on the run.

On race day, I passed Roger on the swim, as predicted. I waved.

I headed out on the bike, hoping against hope to hold him off. I had memorized all of the hills and climbs. Having ridden them alone, unsupported, I had an inner confidence about the difficult parts. I knew the sections where there seemed to be no good reason I was slowing down, but I was. (On my training ride I had dismounted once to check for rubbing brakes or a flat tire, so elusive was the cause of my struggle up a false flat into the wind.) I knew when to stand up on the pedals and when to shift. I was immune from worry about missing a turn, since I recognized the landmarks. I didn't waste speed through turns, since I knew there was only one that required braking. In addition to riding the course, I had visualized the race while studying the course map in the days after my practice ride.

I made the turnaround on the out-and-back section and watched the other side of the road studiously for my friend and rival. There was no sign of him. I had a big head start after the swim, so I figured he would pass me elsewhere on the loop, or I would see him the second time I did the out-and-back. Alas, I didn't see him on my second loop either.

I came through transition, narrowly avoiding falling on my face after I remembered I had added a saddle-mounted bottle and tool holder that interferes with my flying dismount. I didn't feel great as I began to run, but I knew Roger was behind me, somewhere. I headed out onto the run course.

The run was two loops, out-and-back the whole way. So I definitely would not miss seeing Roger, and I would be able to easily calculate what I imagined to be my dwindling lead. I ran the first 3.5 miles and hit the turnaround. No Roger. On the way back, I stopped at the bathroom and asked the aid station volunteers if they would let me know if someone matching Roger's description should pass by while I was in the bathroom. He did not. Finally, six miles into the run, I saw Roger finishing his first mile of the run course. I waved and smiled. He said something about the bike course being very difficult. I started doing some math in my head. (This is nearly impossible for me to do while running, but it was important, so I persevered.) I calculated that if I stopped running then and walked the entire rest of the course, he could catch me.

But I felt fine, so I continued running. On the second loop, I took a few walk breaks, but largely stayed in control and kept up a decent pace. I saw Roger again. He was gaining on me, but not by enough. He made up some distance on me, but I was still more than four miles ahead.

I finished the race in six hours and 20 minutes, and was surprised and thrilled! It was well under my goal time, and I wasn't wearing a watch, by choice, so I hadn't known what my pace was during the race.

I drank water, rested a little, packed up my transition area, put everything in the car, and returned to the finish area just as Roger was crossing the finish line, about 25 minutes after I had. So, how did this middle-aged lady beat a male friend in his 30s?

Here are my takeaways: