It Takes Heart-Part 5: Pacific Crest HIM

When the air horn went off, I did my best to simulate laps in the pool, but that dang panic came over me again, causing me to breaststroke until I could calm my breathing.

Okay, today’s the day. I'm ready to share my half-Ironman experience with my fellow tri-mates. First though, I want to thank all of you who've read my articles and rated them so high. I'm actually working on a book with the Registered Dietician from the Oregon Heart Center's Cardiac and Pulmonary Rehab Department. Her name is Nancy McCaffrey and the book is called "Really Living with Heart Disease." I'm doing everything in my power to get it done by this fall. It chronicles my life from marathon training, to open heart surgery, and finally to the finish line of the 2005 Seattle Marathon seven months later. I've had such success with my diet, fat loss, and cholesterol that I'm including a section in the book that's full of my special recipes and tips, as well as Nancy's dietary contributions. Now then, let's do a half-Ironman.

I can't say enough about the beauty that is central Oregon. If you're going to put yourself to an extreme test of endurance and willpower, you might as well enjoy the scenery while you do it. You can see photos of the area and of the event. In the search window, highlight "Pacific Crest Saturday" and on the next page enter bib #295 for photos of me, or you can hit "browse all pictures" at the top of the window to see the other entrants.

The water was around 65 degrees, and that first insertion was an eye opener.

I was in the last swim wave, and since this event started in a mountain lake I wore a wetsuit.  There were three other waves ahead of us and I was very anxious to get started. It seemed to take forever to get to us. When the air horn went off, I did my best to simulate laps in the pool, but that dang panic came over me again, causing me to breaststroke until I could calm my breathing. Once I was able to put my face in the water and swim I ended up breathing with every stroke for probably half the course just to make sure I had air.

I believe the root cause of my panic is due to starting too fast and getting out of breath right away. Since my heart surgery, my heart rate under stress runs a little bit high and going from zero to sixty too quickly causes problems for me. I'm going to test my theory Sunday, 8/6/06, with my last tri of the year. I plan on warming up closer to the start time so that my heart is pumping around 120-130 bpm. I'm confident I will overcome this issue eventually.

The hardest part of the lake swim is keeping your bearings.

There are no underwater lanes to follow, and since I was breathing with every left or right stroke I veered off course often. Once, a swimmer crossed right in front of me and as I lifted my head out of the water to see what his problem was I noticed it was I who had turned perpendicular to everyone else. I heard horror stories about congestion around the buoys, and I ended up going quite wide to avoid the traffic jam. By the last third of the course I was in the zone, breathing left and right with every third stroke just like in the pool. What a relief it was to touch bottom and slosh out of the lake and onto the boat ramp for the jog to my bike.

I gotta be honest—having full access to the transition area is a turn on. It reminds me of my days in a rock band with backstage access and all that. Admit it, you like the feeling of power you get when you wheel your bike and gear bag past spectators and onto the stage we call the "transition area." It's okay; after all, we're performers. It's not just me, right?

Taking my time in T1

So as I jogged to my T1, I unzipped the wetsuit, hoping it wouldn’t get caught in the mock turtleneck shirt I had on underneath, and fortunately for me, this time it didn’t. I took my time in T1 because I was about to ride farther then I'd ever ridden before and I didn't want to leave anything to chance.

After downing some liquid, a gel, some fruit in a cup, and half a peanut butter and jelly sandwich I was on my way to the starting line for the cycling stage nearly one hundred yards away, and you know how easy it is to run in those cycling shoes.  The carpeted runway was a blessing in that regard and allowed for a faster pace. My ankle chip made the sensor beep as I bolted through the checkpoint and hopped on my Pilot . My longest training ride prior to the 56 mile leg of the Pacific Crest HIM was forty miles on my Giant Hybrid. I could only think positively about my chances of riding up a mountain and down the other side.

The real climb was before me and all I could do was keep pedaling.

At first the grade wasn't much more then I'd faced in my training rides and I was elated to see seventeen mph on my Cat-Eye speedometer.  Soon I was down to 5.5 mph and riding in first gear to make it up and over without bonking. As I looked ahead it appeared that the road flattened out at each curve, but when I got to that curve it just kept going up. This happened many times and made me recall a conversation I had at the pool with another triathlete. She competed last year but didn't make it to the top of the mountain because she said the climbing wore on her mentally until she just couldn't climb anymore; it drove her crazy. I was determined not to let that happen to me and kept telling myself not to quit no matter how long it took me to get to the top. Eventually I'd be going downhill . . . I had to.

I saw my nemesis, the old guy I couldn't catch during the cycling stage of my first tri, on the side of the road in the Cobra position, trying to work the kinks out of his lower back. I wouldn't see him again for the rest of the race. 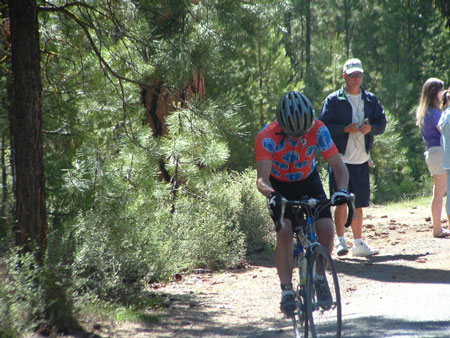 I finally crested the mountain and began the blessed fourteen mile descent to T2. I eased back with a few miles to go to try and loosen up my legs, and dismounted when prompted to by a volunteer. I hustled to my gear, racked my bike, and peeled off my cycling clothes. By now the temperature was close to ninety, and I opted to wear just my black Speedo jammer shorts and a hat for the thirteen mile run. I sipped every forty-five minutes during my ride and felt like I'd retained it all so I headed for a portable toilet before hitting the trail again. Man! I really peed a lot and felt I'd have to closely monitor fluid intake from now on to avoid hyponatremia.

I wasn't the only one whose legs weren't working properly.

I hit the ground running, but my hamstrings seemed excessively tight. I was dejected when I realized my planned two hour half-marathon wasn't going to happen. Oh well, I was still running, so I just stopped worrying about it. Even though I felt like a snail I kept passing people, and the cool thing about that was reading the ages written on their calves and privately rejoicing when I passed someone ten years or more my junior. I got in the routine of stopping at the water stations, pouring one cup on my head as I walked and sipping another until I reached the trash bin.

It seemed to be that my legs would tighten up just as the aid station came into view and by the time I walked to the trash bin they were ready to run again. This happened time and again but it kept me going and I continued to pass other runners while only being passed by two runners myself. One of them was part of a relay team, and the other was a woman I dog-fought on the bike and played cat and mouse with as we ran until she pulled away from me around mile nine or ten. 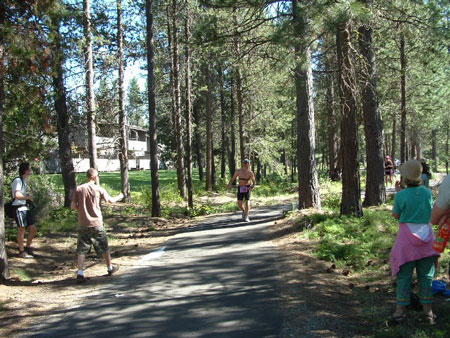 I got to the point where I knew I would finish.

I thought of how my marathon story had served to boost the morale of heart surgery patients fresh from ICU, and now I had another, greater accomplishment to share with them. Me, a triple bypass survivor, just gave my son a high-five and crossed the finish line of a 70.3 mile triathlon in 7 hours and 10 minutes. I'd survived the lake swim, gutted out the climb over Mt. Batchelor, and pushed through the final thirteen mile run to finish under my own power. It was a big step toward my goal of a full IM which I've registered for, and plan on doing, in June of 2007 in Coeur d'Alene, Idaho. Maybe I'll see you there?