From couch potato to a tri in 8 weeks. It was the most fun I've had in a long time. The race organizers had it down and there were no problems at all. This was the perfect first tri, in my opinion.

I was looking for something to keep me motivated for weight loss and working out. I decided to enter this race a bit over eight weeks before, when I found out from a physical checkup that my weight had hit 220lbs (I'm 5'8). Time to lay off World of Warcraft!

I read online about basic training to get going. I focused mainly on running at first, starting at about a mile, and then worked up to 6 miles at the end, mainly to burn off some fat. I didn't worry about the bike too much, and only did one bike ride during this time, which was a huge mistake. For swimming, I was lucky enough to live close to a lake with a perfect day use area for shallow swimming. I focused on swimming daily for the last two weeks with runs tossed in here and there.

I have to say it was somewhat embarrassing to pull my Wal-Mart mountain bike I had borrowed from my 16 year old daughter when everyone else was pulling out pimp gear. But my goal was to finish. I would have liked to place and do well, but that was not the real goal.

Some gems from the net that helped me: I drove to the site the day before to get an idea of layout and location. For breakfast, I think I ate a Cliff bar, a banana (just because I wanted it), a power gel, and a lot of water. I also stopped eating about 11 hours before. I arrived on site right at 6 a.m. for late registration and packet pickup. The race had no numbering or chips, but being there early gave me time to see how everyone else set up their bikes.

Swim
I used a combination of swimming standard freestyle for as long as I could go, and then flipping over on my back to rest a second. I knew I wouldn't be able to swim the whole thing, so I didn't even try. I finished ahead of about 1/3 of my division doing this, swimming slow, and just keeping calm and casual. The swim turned out to be the easiest.

Bike
I was on a crappy mountain bike with road tires. This was by far the longest of the three events, and the most painful. I didn't train for biking at all because I was worried about swimming. Except for a few minor down hills, it was about a seven mile uphill climb. Acid burn in my legs was rough, the bike was heavy, and the gearing of this cheap bike meant I couldn't pedal downhill at all without free-spinning. Even the crappiest road bike would have been a better selection.

Run
Because of the bike, it was the longest 3.4 mile run of my life. I had to go to the bathroom, and since I was so cramped from the bike, I did. But I did manage to grind it out with only three minor pauses. I'd trained on very steep hills, so the hills weren't bad, but my quads were shot.

It was the most fun I've had in a long time. The race organizers had it down and there were no problems at all. Clear as a bell and easy to follow. This was the perfect first tri, in my opinion. 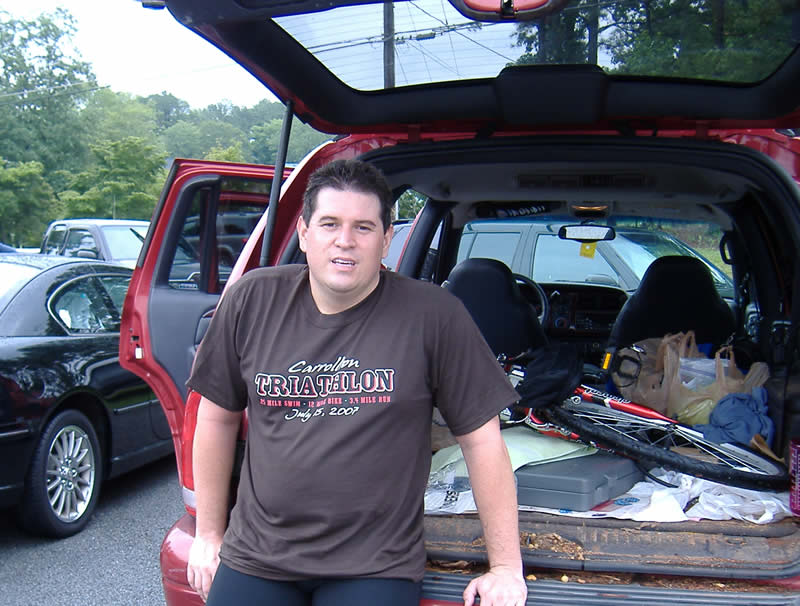