I couldn’t help but feel that the race had beaten me. Perhaps duathlons were more for me? No, I was more determined than ever to succeed. I was determined to get on top of my swimming.

I’m not quite sure what it was that moved me into action to sign up for my first triathlon. Maybe it was that I needed to work towards a fitness goal that was clearly defined? I get bored very quickly if I just do some running or some cycling. My job can be stressful and demanding (long hours), and I’ve found my general health deteriorating over the last few years. I’ve always been a very keen cyclist, but I’ve found it tough to find a good group to ride with consistently. Riding in a group is great fun, but riding long distances alone can be dull. Anyway, at least I had a decent road bike.

Competing in a triathlon has long been a cool-sounding idea in the back of my mind. I’ve watched televised triathlons and have always been in awe of the triathlete’s ability. I guess it has always been a level to which I have aspired.

So, my starting point: I’m in reasonable shape, 5’11”, 180 lbs., with good cycling fitness. As for running, I don’t really enjoy it, but I can force myself to do it. Swimming? Well, let’s just say I’ve never swum a pool length in earnest. I’m perfectly comfortable in water, but I’ve never had to actually swim anywhere.

I decided to start small and do a Tri-a-Tri in Milton, Ontario, just to see how it went. The distances were 375m swim (sounds short), 10km cycle (barely work up a sweat) and a 2.5 km run (I’m sure I can get through that quite easily). I knew the cycle would be easy and 2.5km is not far to run. So I went down to our local community pool (conveniently located at the end of our street) during lapping sessions and tried to “swim.” I got into the slow lane and tried to swim a length (25m). Halfway across, I was gasping for breath. That’s when I knew I was in trouble. The race would be 15 lengths. I hoped that my wetsuit (15-year old surfing suit) would give me good buoyancy and make the swim easier.

The day of the triathlon finally arrived. My wife and Bentley, our dog, came along for support (very vocal from Bentley). I found my spot in the transition area among some really amazing (and expensive) bikes. I thought this was a TRI-a-Tri...? After laying out all of my stuff, picking up my timing chip, and getting body marked, I pulled on my wetsuit and headed down to the water to see what lay ahead. “Wow,” I thought, “Those Sprint triathletes sure have a long way to swim…um, wait, that’s the Tri-a-Tri route. DOH!” Was it just an optical illusion? That looked far. And there were people swimming most of the way just to warm up.

Anyway, at least if I got into difficulty, someone would be able to see me drowning in my lumo-yellow wetsuit. The horn went and we were off. I stroked about ten strokes and almost drowned gasping for air. Having several other people swim over me didn’t help. Also, my surf wetsuit restricted my arm movement. What was I doing here? I seriously thought about turning back, but after some breast-stroke and doggy paddle, I was almost two-thirds of the way towards the first buoy. I would just soldier on slowly as best I could. I wasn’t going to give up. One chap in front of me paddled towards shore and dropped out of the race. Another held onto a lifeguard’s kayak.

After what seemed like an eternity, I was almost on shore. As I came out of the water, I was so totally exhausted, I could barely walk. I managed to stumble to the transition area trying to catch my breath. The transition went fairly smoothly, apart from my shirt rolling up on my back when I put it on. I had no strength left in my arms to reach up and pull it down. I made it onto the bike, thankfully, and spent some time just composing myself and catching my breath. The course contained some rolling hills and I really struggled. I had very little energy left after that swim.

Before long, and after passing dozens of people (on expensive bikes), the cycle was over and I was back in the transition zone. T2 went smoothly, but as I ran out of the transition area, the route headed up a steep hill before heading out into the countryside. I couldn’t run up it. I was toast. After managing to walk up the hill huffing and puffing, I ran and walked until the turnaround and managed to settle in to a slow jog. With about 500m to go, I picked it up knowing that it would soon be all over, and that I could at least run across the finish line for my wife. I was relieved that it was all over.

I had done it. I was a triathlete. Cool.

As it turned out, I placed 100th out of 227 Tri-a-Tri triathletes. Not too shabby. However, I couldn’t help but feel that the race had beaten me. Perhaps duathlons were more for me? No, I was more determined than ever to succeed. I signed up for the Niagara Sprint Triathlon several weeks later. With The Total Immersion Book and DVD in hand, I was determined to get on top of my swimming.

Here is my advice for other beginners: 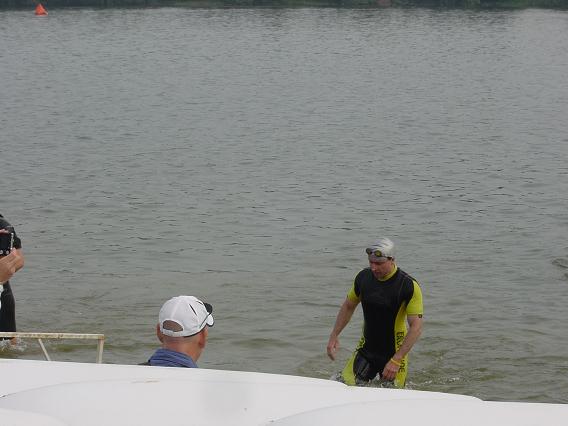