Humorous short story about giving up feminine luxuries for the triathlon fitness lifestyle.

I did, you know. I don’t mean “back in the day” or “before kids.” I mean, like, two years ago! I turned heads in my perfectly accessorized trendy outfits, collection of fabulous and well-coordinated four-inch heels, recently color-treated hair, and eye makeup that took twenty minutes just to make it look like I woke up that way – not to mention the perfect shade of fake tan that was applied directly after the shower to ensure there were none of those unsightly lines. That was me – the sultry female lead for all the local theater companies.

Then it happened. My equally sexy sister (okay – I’ll not be catty; the truth is she’s sexier – always has been – one of those exotic hotties that are in the background in college beach movies sexy – yep, that’s my older sister), said she did this “triathlon thing.” My OLDER sister! My younger sister – the one who’s got biceps so big that most young Privates would fear challenging her to an arm wrestling competition – is the one who’s the athlete, not the hot sister. How unfair is that! (I’m the artsy one, by the way.)

The pictures that sexy sister sent from her race weren’t exactly the centerfold from Women’s Fitness magazine; she had something like pain on her face, but that’s what it’s all about in the end. If she could do a triathlon, then so could I – and I’d look good for doing it too! In my head, I was already the next Women’s Fitness centerfold. Forget that! I’d be Sports Illustrated Swimsuit Issue material!

Apparently, my younger sister, the athlete, felt similarly that the hot sister should not get to tread on her athletic turf. It was a plan. The next year, all three of us—the hottie, the artist, and the athlete—would do the race.

Training stinks for an artist. It was only a little ways into a run when I realized that actual workouts last a little bit longer than a Hollywood montage of a workout. Shoot! I couldn’t even remember the words from “Eye of the Tiger,” and there were no steps for me to climb and jump up and down on while an entire city cheered my sporting progress. My mind wandered more than my body in the weeks leading up to the triathlon...

Is that sweat rolling down my brow??? Hello! It’s totally going to ruin my makeup. I hope I’m not red in the face because it would completely clash with my earrings. I worked so hard to put together the perfect look for a workout. It took a full day of shopping, after all! Angelina Jolie’s costume designer surely would have had this very number in her wardrobe. How long did I run? Ten minutes? That’ll do. Ten sit-ups here. Twenty minutes on the bike (ooh…that was a long day). Some push-ups. Do the baby ones count? Eat right. Well, as long as I still get my morning coffee and my daily chocolate. Besides, when all’s said and done, I’m sure my husband will take me out for a light dinner (soup & salad, perhaps) and maybe even dancing! I could wear my silver heels and the tight dress with the slit up the side…hmm…I wonder if all this working out is going to make me look better in that dress. I can dab a little vanilla oil behind my ears and on my lips. That’s an extra special touch when I know there’ll be kissing involved. And, of course, I’ll wear my perfume. Speaking of which, I really should stop running before I smell or something. I’m so hard-core!!!

Race day arrived and I was in a perfectly matched two-piece swimsuit. It was picked solely to go with my helmet for the bike and my shoes for the run. “After today,” I thought, “I get to casually tell people who turn their heads (the brave ones who get up the gall to talk to me and ask what I do to keep in shape), ‘Oh, I’m a triathlete.’

“I am going to look so good crossing that line.”

It’s a quick humiliation that settles on a new triathlete. I don’t know about the hottie or the athlete, but I was humbled somewhere around the time when they blew the starting whistle. I realized all too well (from beneath the body of another swimmer) that my swimsuit wouldn’t even be seen in this massive wake of flailing body parts and waterweeds; much less will it get me to those buoys across the lake.

When I hit the sand on the other side, I didn’t even get a chance to suck in my gut! For that matter, I didn’t even bother to put my sleek helmet on in a way that was…oh, I don’t know…STRAIGHT. Something unexpected happened as I made my way toward the finish line, though. There were no Women’s Fitness OR Sports Illustrated photographers waiting anxiously for my finish (long after the hottie, by the way). But I wanted to finish, nonetheless. I didn’t even care that I looked like hell.

It’s a year and eight triathlons later, now. Yesterday, I had a date with my husband. What did we do? Rode our bikes…a 35-mile ride, that is. It took over two hours. I fell once and the knee got scraped a bit. I got a little bit of my favorite accessory all over my (real, and complete with lines) tan: bike grease. It’s second only to the black-markered numbers that still won’t wash off of my arms from the last race. I’m not there yet, but one day I hope the biceps will be as strong as the athlete sister’s, even though that won't work with the little dress. I wonder if I can replace the silver heels with some flats?

“You want to grab a bite?” he asked after the ride.

“Steak?” I returned. “Just let me clean up.” I passed up the heels for a pair of flip flops. The blisters on my toes were nearly healed, and maybe nobody would notice the chipped toenail polish. I threw a hat on over my dark-rooted hair. I'd have to dye it when I didn’t have a chlorinated swim workout on the schedule. I checked my watch that didn’t go at all with my outfit, but could hold up to thirty splits.

“You too! Hey, maybe we can call my sisters to meet up,” I suggested. “They were out running today.”

We blasted the radio on the way and “Eye of the Tiger” came on. I sang along to every word.

Then, we met up—my husband, the hottie cyclist, the artistic swimmer, and the athletic runner—at the only place that didn’t mind the way we smelled. Believe me, we turned heads; I think a couple of people might have left.

“Oh, that looks nasty,” said the host, indicating my chain-bitten leg. “What happened?” 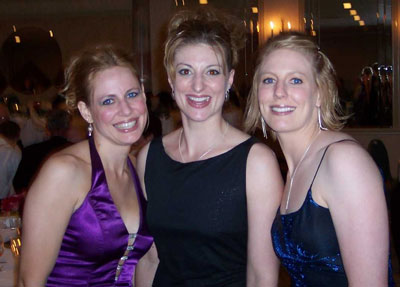 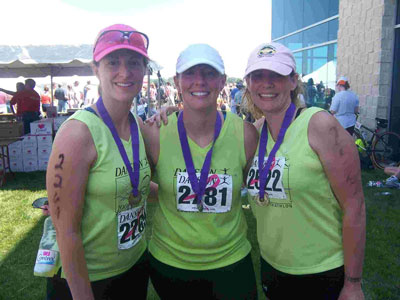