It was the morning of Ironman Newfoundland 70.3, I felt queasy. I didn't want to eat or drink anything. I had a full blown case of the pre-race HEEBEE GEEBEES.

I just read the article about a first time athlete's pre race jitters as she prepared for her very first race. I thought, I have a story about pre race jitters, and surely someone would love to hear about it.

In my case, the circumstances were slightly different. I am not a veteran, but I am not totally new to the sport either. With six years of triathlon under my belt, I counted a total of fifteen races, including seven Olympic distance, one half Ironman, and one Ironman.

It was the morning of Ironman Newfoundland 70.3, I felt queasy. I didn't want to eat or drink anything. I had a full blown case of the pre-race HEEBEE GEEBEES. Standing on the beach before the start, my legs were so heavy, I just wanted to stand still and not move.

Getting the jitters is one thing, dealing with them is a separate issue. Once the horn sounded, and I followed the crowd into Deer Lake, the feeling started to go away. I had a job to do, and once I got down to it, my stomach started to feel better, and I managed to finish the race just six minutes off my goal of six hours.

Nerves were not a new sensation for me. As a kid, I grew up playing hockey. In fact, I was a goalie. I remember many big games where I felt so nervous standing there in the crease waiting for the puck to drop that I wanted the ice to open up and swallow me whole. But after handling a few shots I would always relax a little and the butterflies would go away.

I also remember lining up at the start of the Championship Race of the Royal St. John's Regatta. With nearly 10,000 people on the shore around Quidi Vidi Lake, and knowing I was about push my body through nine minutes of extreme pain, I should have been ready to puke. But instead, on all three occasions when we raced in the championship, I was relaxed, calm, and ready to go.

Leading up to race day there was a series of unrelated events that impacted my preparation, starting with the weather. East Coast Canada can be unpredictable at best. Spring this year started with some early warm sunny days, but then it turned cold and wet. It was just too miserable, and I had no motivation to get on the road.

Once it did warm up, I suffered an injured toe. It was really painful, and it kept me off the bike and prevented me from running until about six weeks out. Still, benefiting from a solid base from last year’s Ironman preparation, I managed to get in some good long weekend rides and runs. But my midweek workouts suffered, and that affected the quality of my key workouts.

Next, I had a negative experience at work. The day I walked out the door to start my two weeks vacation, my attitude should have been "WAHOOO, I'm off for two weeks and ready to do a half Ironman." Instead, it was a case of "Thank @*$# I am out of this place for two weeks." The incident stayed in the back of my mind all during my final race preparation.

Once in Corner Brook, I got in some good key workouts on the race course, but the weather was really hot, which made it difficult to sleep. On top of that, I was a little off my goal race weight. I just didn’t look as lean and ready as I did a year previous in Florida.

The Wednesday before the race, my wife left to drive five hours to her hometown for a high school reunion. In one way, it was good that I could focus on the race, but it left me without a vehicle. The race venue was a good 25km away, and I had to rely on the kindness of others for transportation to and from the race venue.

Finally, the day before race day, I did a short workout, then left my bike with the LBS tent to check my tires and run the gears. When I checked back an hour later, Pete, the owner, told me that my rear dropout was bent, and he would have to run back to town to pick up the proper tools to fix it. Instead of checking in early and relaxing, I spent the day worrying if my bike would be OK, fixed in time, or ruined forever. I ended up checking in an hour before the deadline.

On race morning, I lined up on the beach in my wetsuit with a couple of friends. My race plan was to start the swim with the middle of the pack, get a good draft off of a stronger swimmer, and clock a good swim split. As I stood on the beach, motionless, that plan went out the window. I just stood there waiting for the minutes to tick away with a blank look on my face. A few people told me it looked like I was very relaxed. Truth was my stomach felt like crap, and my legs felt like lead.

As I said before, once the horn sounded and we waded into the water, I started to come around. Within about ten minutes, I was concentrating on keeping a good course, and my jitters disappeared. I settled down, and ended up running a decent race.

So what's to be learned from an experience like this? Stay tuned for part two, I will let you in on five things I will do differently next year to make sure I am better prepared. 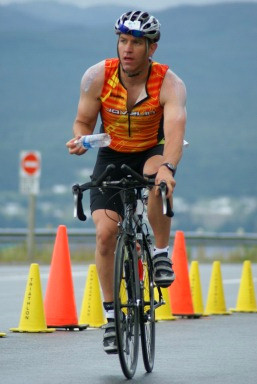