My First Tri - For all the right reasons

Using tri training for breaking bad habits, getting healthy and gaining confidence plus a little bit of humility.

Even though I had attempted to quit in the past, this time I had a plan and renewed motivation. I was 43 years old, married with two children (ages nine and eleven), and had an overwhelming feeling that I was going to die.

Every time I got sick, whether it was a cold or flu, or each time I noticed any new bumps or bruises, cold sores, or bug bites, I immediately assumed it was cancer and I was destined for a slow, painful death. Ultimately I realized my fear wasn’t dying, it was leaving my children without a father and my wife without a husband.

Even as a light to moderate smoker (less than half a pack a day), I had always thought of myself as a fairly athletic person. I grew up athletic, played multiple high school sports, and did my best to stay in some semblance of shape by keeping busy in the yard during the weekends and trying to get some form of workout, however inconsistent.

The decision to quit smoking was easy. Trying to find a replacement for the habit was the hard part.

I think this is the true focal point for many of us new to the sport. Whether it’s losing weight, lowering our blood pressure, or breaking bad habits we have common ground in using the mental and physical challenge associated with triathlons to replace and motivate.

My decision to use triathlon training as a replacement for addiction was prompted by a coworker who participated in triathlons and was training for an Ironman. After an evening work event and a few motivational conversations with my co-worker, I made the decision to train for and complete a race.

I quit smoking the next day and immediately began the process of training for a sprint triathlon that was set to run early fall at Bonelli Park in San Dimas, CA.

Over the next four months, I bought a bike, running shoes, and some tri apparel. I signed up for BeginnerTriathlete.com and downloaded the four-month beginner training program.

By the way, tri suits, shorts, shirts….not flattering! But, I guess that’s motivation in itself.

Overall my training seemed to be going well. I maintained my scheduled swim, run and bike training for the most part, and felt myself making progress not only in the times and distance but also in endurance. I certainly didn’t think I was going to set any records, but I began to feel confident that I could finish the event, which ultimately was my tri goal. But the best part was the fact that I felt that I had conquered my cigarette habit.

Finally the big day approached and I was packed and ready to go the night before. On race day, I arrived two hours early, set up my gear in the transition area, and then headed to the starting line to watch the Olympic distance swim waves begin. As the start of my race approached, things began to unravel, as I had already made the first of my critical newbie mistakes.

Mistake #1: I wasn’t hydrated. Up to this point in the morning I had consumed one large coffee…that’s it.

The gun sounded and I rushed into the murky lake water and began to swim at full throttle towards the first buoy. I have always been a fairly strong swimmer and thought that this was my opportunity to start the event on a high note. When I reached the buoy I was near the front of the pack and decided to pace myself, realizing that I was quickly becoming both tired and out of breath.

I put my head down and tried to find a comfortable stoke only to find my legs and feet suddenly becoming the target of the swimmers behind me who were catching up. I altered my direction a bit to find a free swim spot and then proceeded. After another minute or two of swimming, I looked up and found myself headed directly towards a boat directly in front of me.

The boat had maneuvered in front of me to keep me from venturing too far off course. At this point I was nearly 50 yards off course and a sense of panic and a little embarrassment set in. I was tired, winded and just added 100 yards or so to the swim. I began to swim breaststroke trying to catch my breath and needing to convince myself that I could still do this. After a few strokes, I gathered my composure and headed towards shore and the finish line.

As I finished the swim I headed toward the transition area, completely out of breath to the point of feeling a little worried about continuing. Then came the transition area. I made it to my gear and began to feel dizzy, so I leaned on the bike rack for a minute trying to catch my breath and regain my equilibrium. After a brief rest and some internal arguing, I proceeded to remove my wet suit, which got caught on my ankle and caused me to hop around trying to remove it without luck. Finally, I had to sit down and yank it off. Also, who would have thought putting socks onto wet feet could be so freakin’ difficult? As I finished up in the transition area, I downed a sports drink and started the bike portion.

The ride started easy enough with a long, level straight road. I was still having some trouble breathing, but things were looking better as I biked into the second mile of the ride and was starting to believe, once again, that I could finish...even if the feeling was short-lived.

As I rolled into mile four, I hit the hills and began to struggle. All of my workouts were on fairly level streets and I was completely unaccustomed to the inclines that I was now facing. As the hills got tougher, I grew weaker and the burning in my legs became unbearable. As other bikers passed me looking far too comfortable, I needed to continue reminding myself that I was racing to finish—not to finish ahead of anyone else.

I finally ascended the first major incline and hit the long, steep downhill, full of relief. The downhill ended in another incline and the burning misery returned immediately. Feeling like my lower half was engulfed in flames, I finally had enough as I looked uphill and realized I wasn’t going to make it. I stopped my bike and began to walk up the final hill that was claiming other victims a little further up. During the time I pushed my bike up the hill, I was truly impressed at the number of riders who asked if I was ok and began to realize that the people in this sport are a very special breed: competitive, but compassionate, which is certainly a rare combination. I pushed myself up the hill and then re-saddled for the final downhill leg.

Back in the transition area, I pulled on my running shoes, downed another sports drink, and headed to the run at a quick walking pace. I walked the first half mile and finally, after completing the swim and the bike, caught my breath. I met up with another first timer while walking and we chatted about our reasons for being there that day. We then decided it was time to finish what we came for, and started our run.

The feeling of crossing the finish line was unlike anything I have ever experienced. I was overwhelmed with the feeling of accomplishment and satisfaction for actually doing what I set out to do, yet disappointed in myself for making my mistake on the swim, needing to walk the bike on the hills, and walking the first stage of the run. I have always been a competitive person, and feeling that I was less than competitive bothered me.

When the final results were in I had finished in the top half of the swim (even with the extra distance) and the bottom half of the bike and run. My transition times were terrible, my feet hurt, and I was nauseated. When I got home later that afternoon I slept for several hours and really didn’t feel right until the next day.

Time to start planning for my next event!

I was sold. I began training two weeks later for my next event in spring 2008, and have been progressing on my times, my pace, and yes, even on the hills! This time, you can bet I will be much more prepared.

I quit smoking on May 12, 2007, and it’s been nine months since I’ve had a cigarette, but it’s so much more than that. Triathlon training and competing has given me a greater sense of achievement and confidence in my life in general.

If I can do this…there really isn’t a limit. 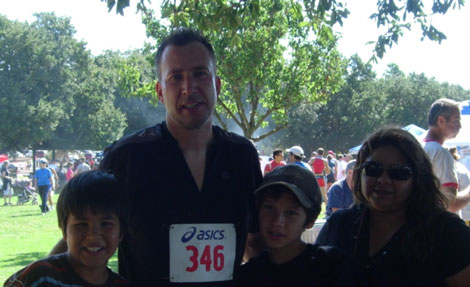