Tri-ing Not to Think about the Swim?

You’re probably wondering why it took me 13 years to get to the starting line. The answer is simple: the swim. Don’t get me wrong, I could swim (sort of), but I didn’t have proper form or technique. On top of that, my endurance and comfort level in the water were nowhere near the levels they needed to be to successfully complete the swim portion of a triathlon.

Was I going to let my dream of doing a triathlon die because of my swimming deficiency? I didn’t want it to, so I decided to take the plunge. I signed up and paid for my first triathlon. There was no backing out. Of course, I could have changed my mind and lost the $85 it cost to register but $85 is a lot of money to me. When I paid, I committed not only to myself, but also to my wife and kids.

So there I was, signed up and ready to start my training. I found a great book by Joe Friel, Your First Triathlon, which was full of useful information. It was easy to construct my bike and run training plan, and although the book discussed the swim portion, I still didn’t feel comfortable. I was well on my way to becoming a triathlete, but I still knew I had the swimming issue to contend with.

If you are anything like me, you’ve probably been searching the internet and gathering as much free information on swimming as you can. I totally understand how you feel because like most people, I’m on a budget and need to be as thrifty as possible. I would much rather spend my time than my money to find information and ideas on conquering the swim portion of my first triathlon.

I soon decided that I was going to invest 37 bucks and purchase a swimming program I found online. Not only was I going to get peace of mind knowing that the program I was about to purchase was developed by a collegiate swimmer who achieved All-American status and then became an accomplished triathlete and a Masters Swimming Coach, but I knew it was going to be information that I could trust and put into action without wasting any more time searching when I should be training.

I made a commitment to follow my new swimming program religiously, always giving it 100%. I struggled at first (often becoming frustrated), but over the next few weeks I started to notice that I was becoming more comfortable in the water and my endurance level was increasing! It wasn’t long before I was swimming further than the distance required for my race. My confidence soared and even though the program covered open water swimming, the fear of the impending ocean swim lingered in the back of my mind.

Race day arrived and I was excited and nervous! 13 years is a long time to wait, but I knew that if I could get through the swim portion, I would prove to myself something I always knew. I could be a triathlete!

The first-time triathlete wave was called to the starting line. My stomach was full of butterflies, I could hear my wife and kids shouting encouraging words, and then “BANG!” I was off and in the water. It took less than thirty seconds for me to be kicked in the face, and before I knew it, I had swallowed several mouthfuls of salt water. Gagging but still swimming through the breakers, I started to have second thoughts. I could turn around and head back to shore and I could use the kick to the face and the swallowing of salt water as an excuse to drop out, but I quickly realized that I would be doing myself (and my family who got up really early to support me) a disservice.

I pressed on and soon found myself past the breakers and rounding the first turn buoy. I imagined I was training in the pool and soon found my rhythm. I got comfortable and starting thinking about the swim to bike transition, then the bike to run transition…then I could visualize myself crossing the finish line!

I can honestly say that I don’t remember being in the water for very long when I heard someone shouting at me from behind. It was a life guard on a kayak telling me I went to far and needed to turn in. Imagine that. I swam too far!

I turned in and could see that I was about 50 yards past the turn buoy and the swim exit point. Most triathletes would be upset that they lost time by swimming too far, but not me! I was proud!

I swam to shore and was greeted by my daughter (see photo below) who felt it was her duty to chastise me for passing the swim exit point. She then gave me words of encouragement that only a six year old could: “Hurry daddy, you can still win”. By no means was I going to win the race (or my age group, for that matter), but it was those words that made me realize I was going to become a triathlete today!

Before I knew it, I was off the bike and running the three miles that stood between me and my 13 year goal. “A cake walk,” I remember telling myself.

Advice for my fellow challenged swimmers or those individuals who are stressing out over the swim portion of a triathlon is to stop worrying and start training. Find a program and stick with it! If it worked for me, I’m confident it will work for you!

Crossing the finish line that day not only made me proud, but it also made me realize that I wasted a lot of time and energy tri-ing not to think about the swim.

Now go out there and conquer your fears! 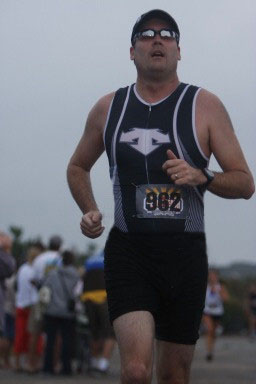