I'm No Longer a Quitter! How Triathloning Helped Me Persevere

I was nervous. The water was cold. The cones defining the course were so far away. When the whistle blew for my wave, I waded in slowly to let everyone else pass me.

I'm one of those people who is a sucker for what's trendy. Kettlebells? I own some. BOSU? It's in the hall closet. Spinning? Have the shoes to prove it.

Unfortunately, I sought out all of the newest fitness trends for all the wrong reasons. I was looking for the magic bullet that would be the answer to my problems with losing weight, while turning a blind eye to the fact that consistency was always my number one problem.

Enter my husband, the triathlete. Our second date involved me getting up at the crack of dawn to accompany him to a sprint triathlon. I watched, I cheered, I took pictures, all while saying, "I'm just not in shape enough to do that."

Fast forward four years, and I was the most out of shape I'd ever been. I had attempted a half marathon the week before our wedding, which resulted in a four hour finish (I walked at least half of it). I gave birth to our baby boy, and nine months later, my husband piped up with, "Why don't you do a triathlon with me?"

The usual gamut of, "Well because I suck," ran through my head when it clicked with me that I wasn't going to get anywhere making excuses. Who cares if I have to walk through the run portion? It would give me a chance to improve, right?

I spent every weekend cycling around the local park on my heavy mountain bike with my son in his bike trailer (though I owned a very shiny and barely used road bike at this time). I ran three or four days per week. I made biweekly trips to the pool. Slowly but surely, I improved in speed and endurance. Slowly but surely, I started to enjoy the thrill.

Race day was nearing and the original venue backed out for some unexplainable reason. I was forced with moving up to an earlier one, practically a month early, or to one a week later that was much longer. I was about to throw in the towel completely, when a new venue appeared.

Race day itself was riddled with problems. There was no one at the venue to open the gate. The bathrooms weren't unlocked. The bike course was arbitrarily closed and opened throughout the race, with traffic backups and cyclists unaware of what direction they were supposed to go in.  It was unseasonably cold too. The water temperature was 67 degrees and the air temperature was in the low 40's, very cold for a day in August for Michigan. Luckily, my husband bought me a wetsuit.

I was nervous. The water was cold. The cones defining the course were so far away. When the whistle blew for my wave, I waded in slowly to let everyone else pass me. I struggled to force my face into the murky water, and started to panic.

"I could really die out here," I thought. As soon as I finished this thought, another woman said, "Keep going, you can do it," as if she could read my mind. I took it slowly and made sure to flip on my back whenever I got too tired.

The run out of the water was dizzying. I struggled to put on my cycling shoes, and started shivering as I set out for the bike course. It took at least a mile for that dizziness to give way to confidence. My husband passed me before I reached the turnaround point. I cried in the last two miles.

I had a goal for the run portion: I absolutely did not want to walk any portion of it. However, very quickly into the run course, I realized that I was running too fast and would have to take a quick walking break. I was passed by a 9 year old girl and watched her long, golden ponytail bound away. This didn't upset me, it made me laugh.

I alternated running and walking as much as I could. When I came upon the final mile, a woman slowed to encourage me to keep running. She talked me through it, patted me on the back, and bounded away in the final stretch. I saw the chute and did my cheesiest "applause" football-player hand motion. People erupted in cheers and I crossed the finish line, ready to collapse in a bucket of fried recovery chicken. I swear, junk food has never tasted so good before.

It was a life changing experience for me. It was the first time that I had ever set my mind to something athletic, trained for it, and followed through with it. I was showing my son a good example. I was taking on a hobby of my husband's. I was being adventurous. I was enjoying myself!

I signed up for another one two weeks later.

And I've signed up for three more this summer. Kona may never be in my future (I'm still slow), but my son can say that his mother is no longer a quitter. 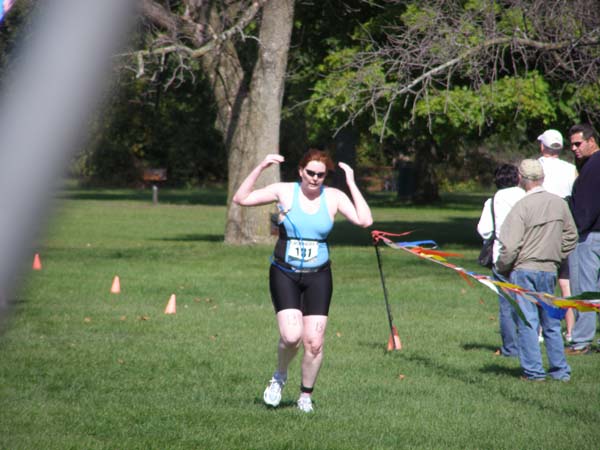 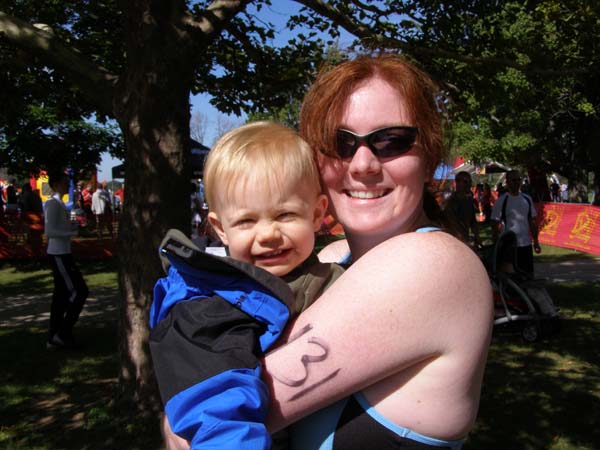 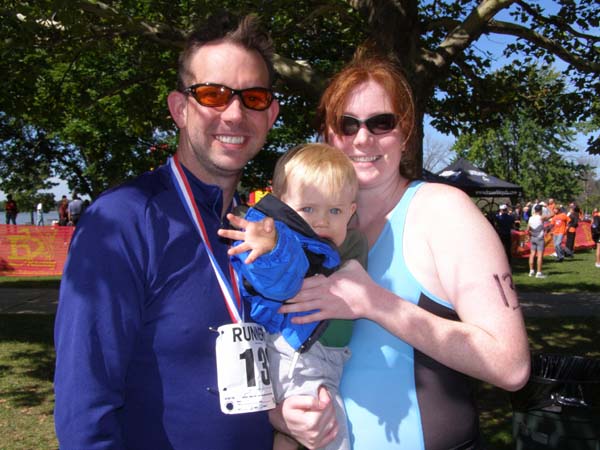