Here We Go...You Got This! My First Tri at Eglin Air Force Base

After I left the running store, I couldn't stop thinking about the sprint tri and how much of a challenge it would be for me. So instead of joining a gym, I started riding my bike and it felt great.

I moved to Panama City Beach (PCB) in March of ‘08 for a new business venture. Previously, I had been going to the gym five days a week and working on physical appearance (losing the gut). I managed to gain quite a bit of muscle (I’m now 6'3", 240 lbs) in the year prior to moving, but I didn't feel fit. I coached youth football for the two previous years and I was able to keep up with the kids; however, I was always hurting the days after. Once I moved to PCB I didn't enjoy the gym here quite as much, so I never joined.

I went to a local bike shop (Big Daddy's Bike shop) to get my bike, a Specialized Crossroads hybrid, tuned up. While I was there I noticed a running store next door called RUN for your Life. I went in and spoke to the owner about the different types of running shoes and told her about my shin splints I had been battling since gaining weight. She told me which pair to get along with some inserts for support. We talked for a little while about the area and she mentioned that she and her family were into triathlons. She told me about sprint triathlons, and that sparked an interest with me. I told her I would be back to buy the shoes later in the week after I got paid. In all honesty, I wasn't sure if I would be back or not.

After I left I couldn't stop thinking about the sprint tri and how much of a challenge it would be for me. So instead of joining a gym, I started riding my bike and it felt great. Then I went back later that week and bought my shoes. I started walking at first and followed the Couch to 5k plan from this site. I got online and started looking up different tris in my area, and I came across "My First Tri" at Eglin Air Force Base in Fort Walton Beach, FL. It was scheduled for June 21st at 7:00 a.m. It was a 200 meter swim, an 8 mile bike, and a 2.5 mile run. I had about six weeks to get ready for it. So I signed up and made the commitment to finish the race.

I found the sprint training plans on here and skipped ahead a bunch of weeks due to the time I had to get ready. I was biking one day, running the next, and some days doing both incorporating a transition to see if I could pull off a good one. I was using regular pedals at first and it was easy. I joined the local pool about four weeks before the race and started reading articles online about proper technique and breathing. I asked questions of some of the local coaches at the pool. I learned a good amount of info from all sources as I progressed. About two weeks prior to the race I ordered a new helmet and some clip-on pedals and shoes. I started training with them right away to get used to them, and I heard of a technique for transitions to keep the shoes clipped on the bike and use rubber bands to hold the heel upright so I could jump onto the shoes during transition. I practiced this technique a few times and got OK at it.

So it was the day before the race and I had only managed to swim the 200 meters once in practice. The bike was going to be easy—I had trained for more than the eight-mile distance. The run...well, I finished 2.5 miles nonstop in practice in 24 minutes once. I did manage to get down in weight to 220 and I felt better than ever. I went to Wal-Mart and bought a bike rack for the trunk of the car the night before and set it up, loaded the bike, got all my gear together, and loaded the car. I couldn't stop thinking about the race. I played it in my head over and over. I started out wanting to just finish, then I wanted to win. 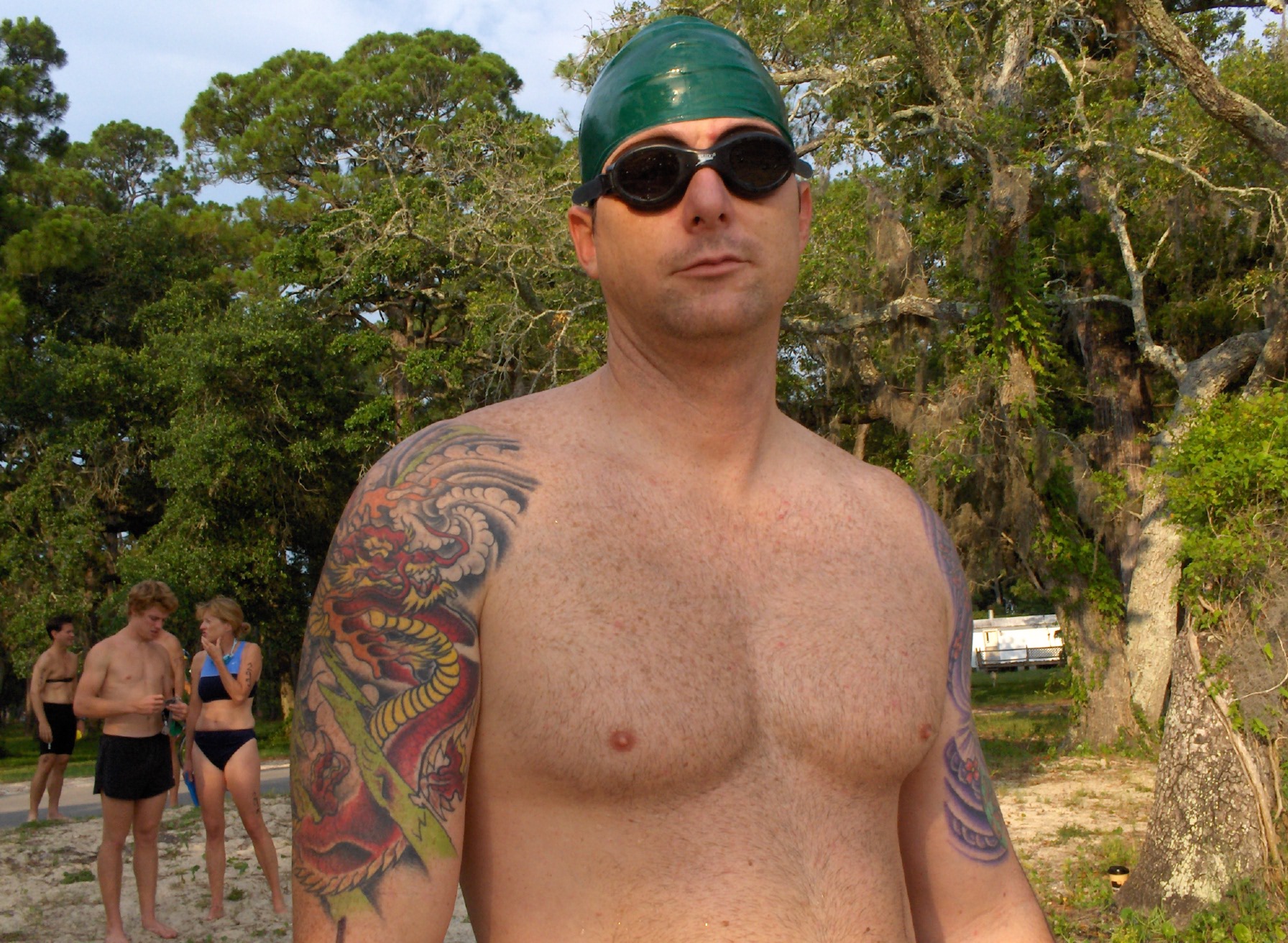 Race Day:
I got up at 4:30 a.m. and was on the road by 5:00 a.m. My wife had to run the business, but my 13 year old son went with me. He was there for support, to take pictures, and to call his Mom in case something happened to me. It was an hour drive to the race location and when we arrived at 6 a.m., others were setting up in transition and getting body marked. At the body marking area they put your age and class on the back of your calf so others can see if you are their competition as you pass them or vice versa.

I picked out a good spot in transition and set up my area, figuring out which way we were coming in and going out. I was wave four of the day, and waited patiently. The race started 30 or so minutes late. 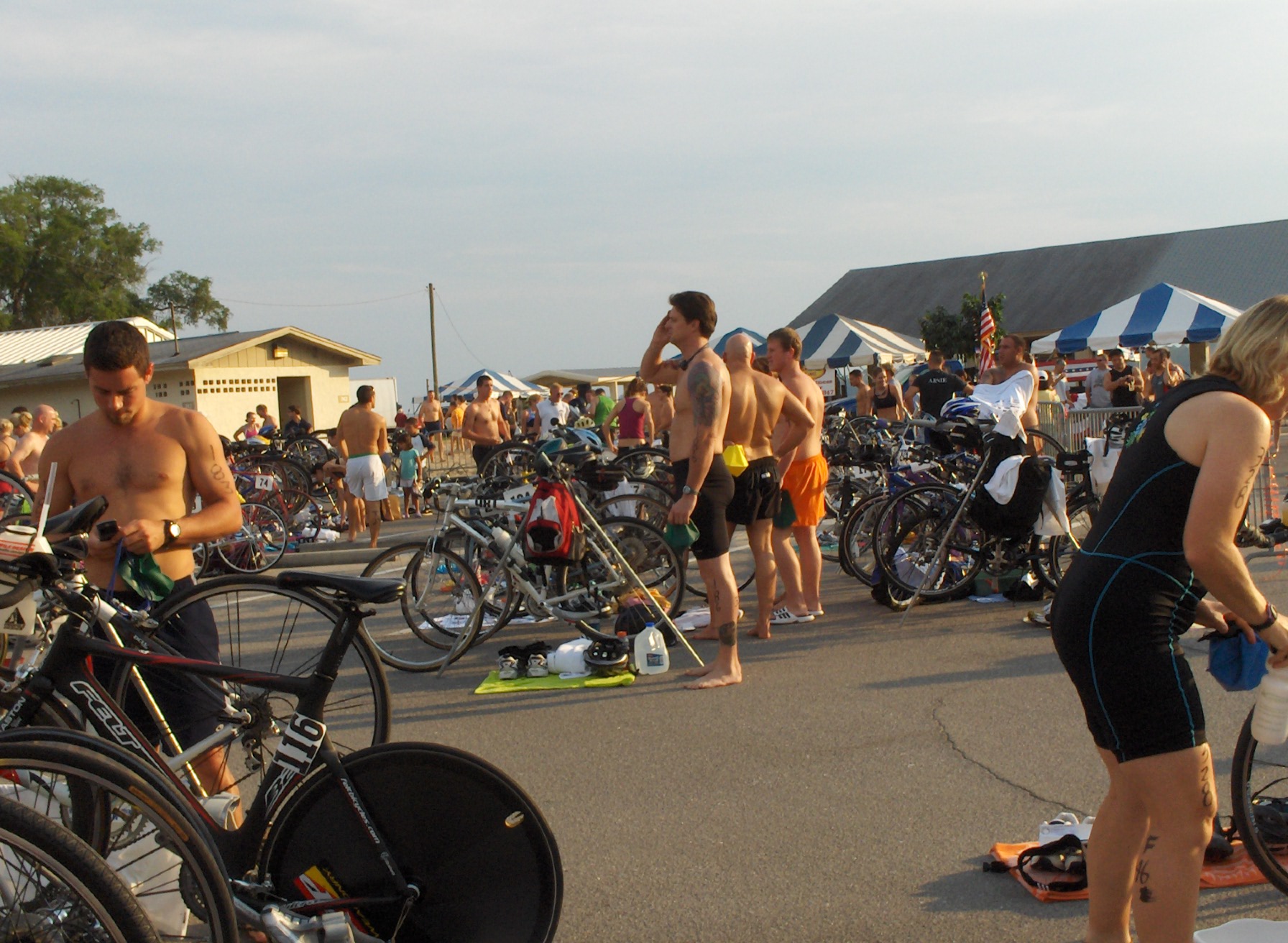 Wave one took off, then the butterflies hit my stomach as I said to myself, "Here we go...you got this". Each wave was three minutes apart. Finally, it was my turn. I stood at the right end of the group on the front line. The horn sounded, and off I went running into the water. As I started to swim, all of the training was out the window. I was in the front of the pack and I thought if I slowed down I was going to get run over. So I kept going, trying to breathe. At about 75 meters in I was tired. I had started too strong, so now I slowed up a bit to catch my breath as others started to swim by. I kept going pretty good until 100 meters and I was exhausted. I made the choice mentally to keep going and not stop. I swallowed some water and that woke me up a little, the thought of drowning was racing through my head. At about 130 meters I was able to touch the ground, so I started running/walking out of the water. I finished in 3:39 and I was still in the first 10-15 racers out of the water. 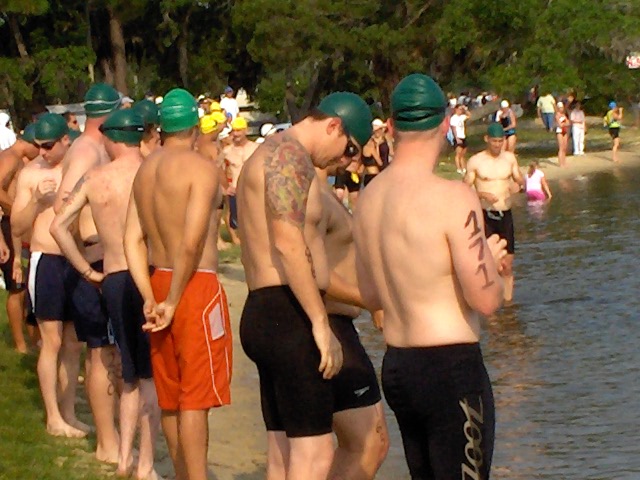 I was exhausted going into T1. I grabbed a gallon water jug I had set up to rinse some salt off my face and as I poured it and nothing came out. I realized I forgot to take the freshness seal off (duh), so I tore that off with my teeth and rinsed my face, grabbed my sunglasses and helmet and ran for the mounting line with my bike. My rubber band setup worked great, I jumped on and pedaled to speed and then stepped in each shoe and kept going. 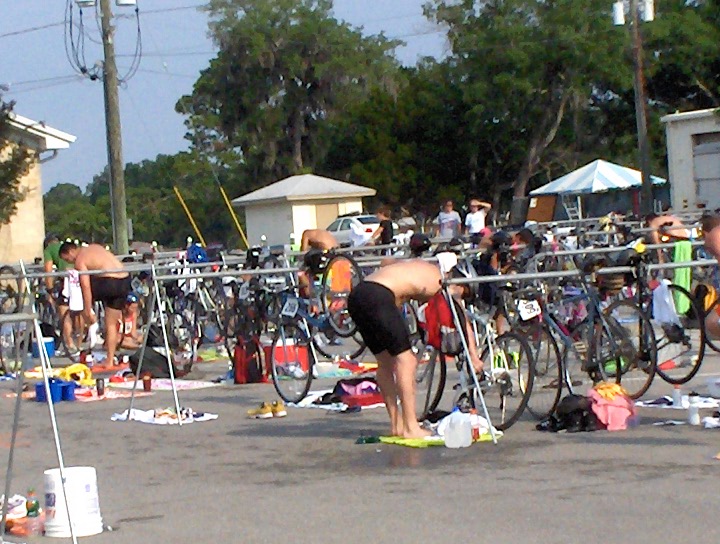 I managed pretty good speed for the bike (about 18mph), considering I am riding pretty much a mountain bike with almost road tires. I passed a lot of people and I got passed by a lot of people on some fast bikes. Coming back into T2 I managed to step out of my shoes in the final 100 meters and ride on top of them dismount the bike and head to my area for my shoes. My socks and shoes went on easy. No water this time, just a sip of Gatorade, and my shirt with my bib number attached. Off I went into the final leg of the race. I told myself, "Here we go…you got this". I started out pretty good, passing a couple of people and then about a half mile into the run I felt like I was wearing a 100 lb. weight vest. 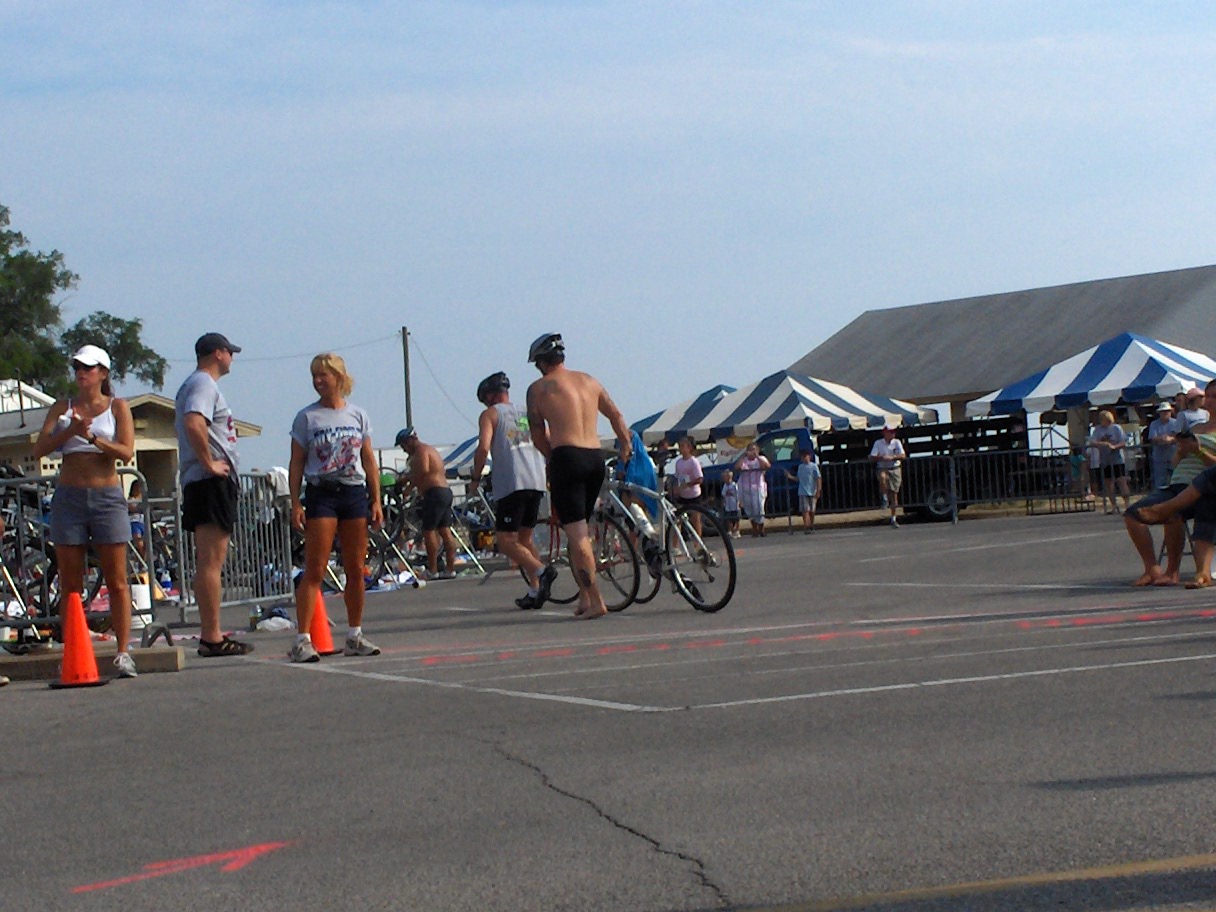 The sun was HOT and I was feeling it. As I would slow down to pace myself someone would pass me. I would look at the back of their calf to see that they were in my age group and class and then I would pass them back. I saw some people walking and said to myself, ”Don't you dare walk…” Then I did. I managed to walk about four times during the run and I was mentally beating myself up for doing it. The volunteers along the course were AWESOME. They would cheer and tell you, "Almost there." Though their almost was different than mine! 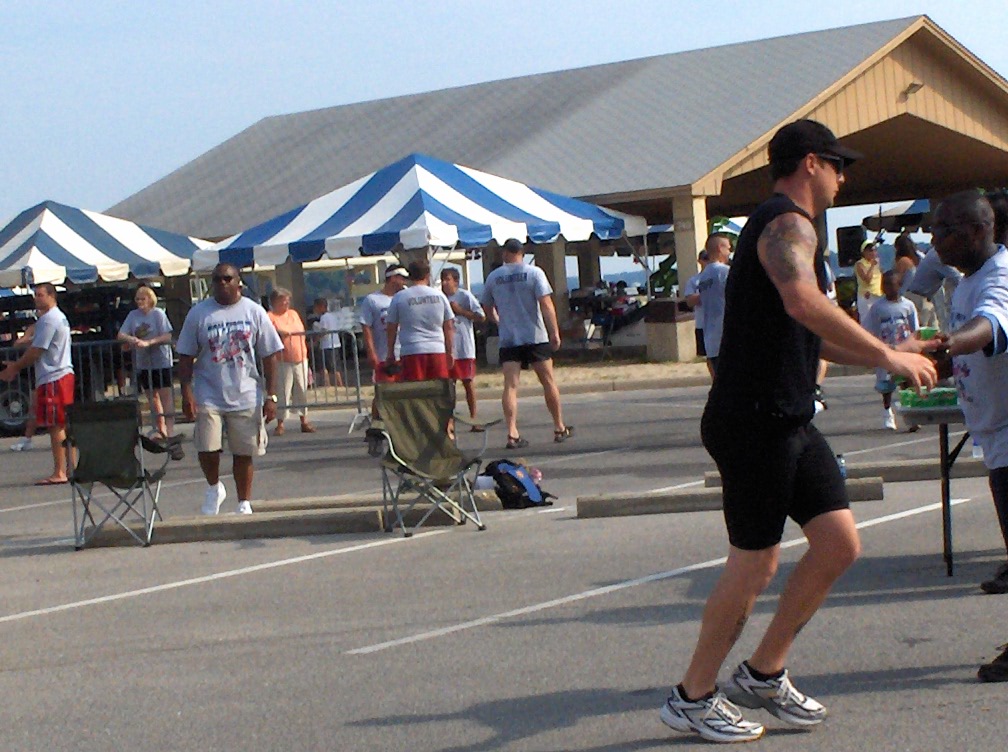 As I got to the last quarter mile I walked for a minute and then I gave it everything I had for a strong finish (and because I didn't want anyone at the finish line to see me walking). I crossed the finish line in 1 hour and 39 seconds. Out of 147 first timers I was number 52. I was 11 out of 16 in my age group. I wish they had a Clydesdale division that day. I would have done better in that class. The experience was AWESOME and I loved every second of it. Even getting my butt kicked by a 76 year old man--47 minutes was his time. Incredible. So now I am hooked. I am preparing for my next and first real sprint in September.

A journey of any length begins with the first step. 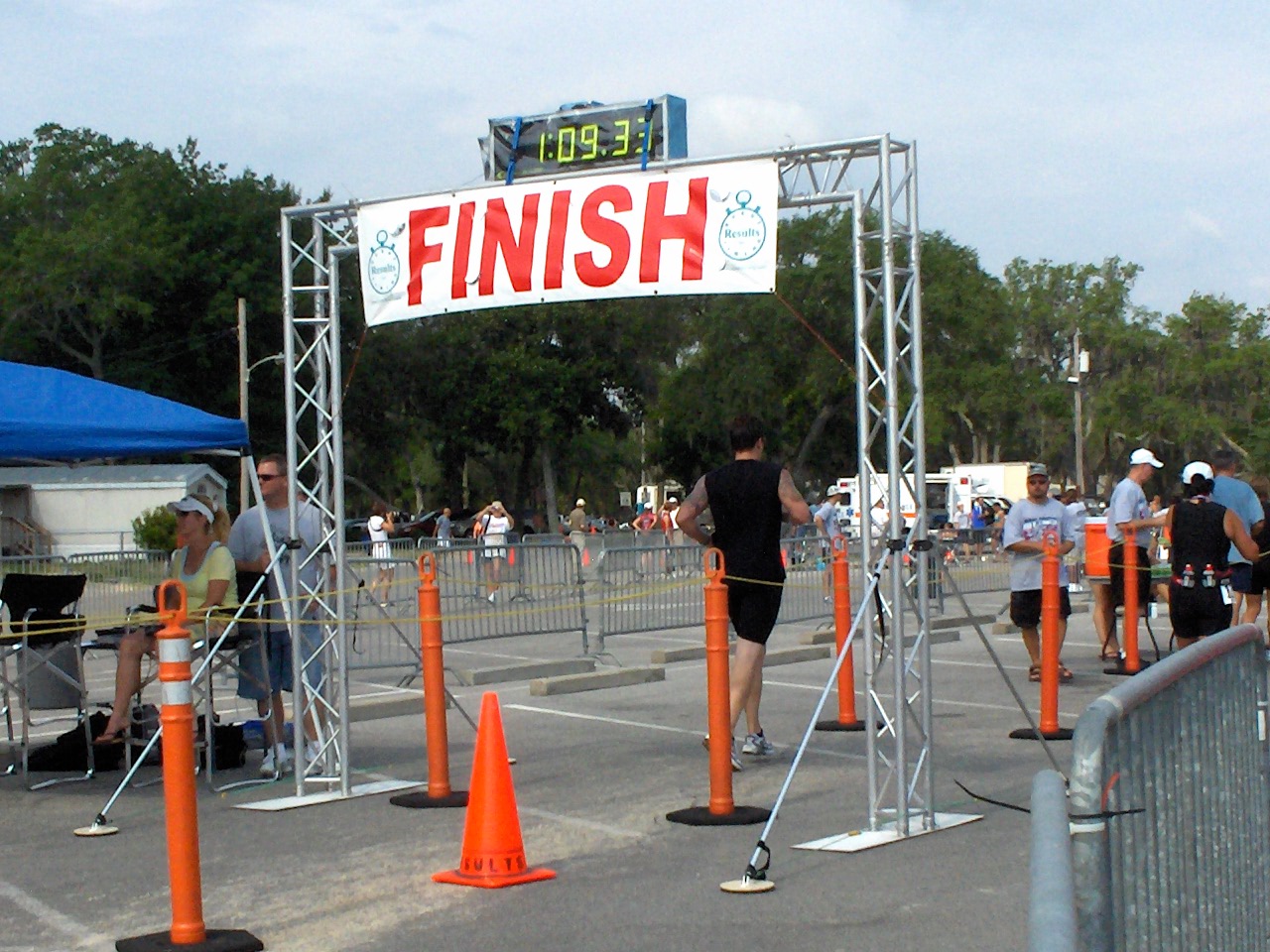