Starting Off At The Deep End

After doing duathlons for the last couple of years, I decided to go for a triathlon. Starting with an Olympic-distance race perhaps wasn't wise, but it was fun (of a sort).

Running, biking, and running... all so humdrum. Or so it was beginning to seem. I cycle into work several times a week, maybe go running at lunchtime or on the weekend; it can being to pale. So although I enjoyed doing the London Duathlon last autumn, I felt the need to do something a bit different, and the lure of the supposed largest triathlon in the world was just impossible to resist—especially with a couple of work colleagues also claiming to be up for the challenge.

Some points of note: I'm not exactly built like a "proper triathlete." In fact, I'm a long way away. Between that and not really having the cash or space to keep an extra bike alongside the mountain bike used for commuting, I was never going to produce an amazing time. In fact, my goal was going to be to simply survive. When discussing which distance we were going to do, the answer was clear: "the full distance," or "the proper one." Such is the foolishness of the crowd.

Back in January, I had in fact just about recovered from a torn calf muscle. That recovery had at least encouraged me to go swimming, since running was considered right out for quite a while. So, from no running and just a bit of swimming and some careful cycle-commuting to Olympic distance in eight months? No problem, surely.

As time went on, and training went on and on and on, things did seem to come into place. I managed to up the distance I could swim in the pool to a respectable 1600m or so... in a nice, calm 25m pool, of course. The running gradually came back-- not to all-time best standards, but at least to 10km in under an hour, which I figured was acceptable. But, of course, triathlon has its extra fun and games, and by the time summer arrived there was one thing that I was dreading above all... the wetsuit. Summer in London is a brief stretch for 30 degrees C in July or so, followed by months of slate-grey misery until autumn really sets in. Wetsuits are compulsory. Struggling into a skintight rubber cage means no escape for you. Fortunately, the event had a collaboration where you could rent or purchase an entry-level suit at a "reasonable rate." When it finally arrived, I quickly found that even an XXL still only came to halfway down my forearms. This was not reassuring. A single solitary open water swim test-drive before the event alleviated my fears somewhat, but nevertheless the swim and the suit remained the most daunting sections.

The day before race day dawned... and well what do you know, it was grey and chucking it down. I cycled two miles from the train station to the venue through the rain, watched the sprint competitors for a while, and wondered why we were all doing this. Oh that's right, it's fun. Yeah. I picked up my timing chip, racked my bike in the cavernous exhibition hall (GPS required to find your way from one end to the other), got the train home, and tried not to worry.

As luck would have it, race day itself turned out much clearer. With the event being split over two days and having racked the day before, I had the luxury of a leisurely journey in for a 1310 start. I laid out my gear: cycling shoes, socks, running shoes, gloves... no towel. “Blast!” I thought. “Oh well, either it'll rain and you'll be wet anyway, or it won't and you'll dry off quick.” Then the dreaded moment... on with the rubber torture suit, legs first. I looked around to see how everyone else was dealing with it. I was amazed that what took me five minutes or so seems to take everyone else 20 seconds. I stopped looking around, and headed to the swim assembly instead. I finished putting my arms in my suit and got zipped up. I realized it was going to happen soon. Gulp.

I put on the bright orange swim cap and down the steps we went off into the water, lining up in the dock by the boat. Yep, it was cold. And now we were treading water for a few minutes waiting for the start time. The dock was just by an airport so everyone waved to a plane on its ascent right over us. And then finally.... off!

It was awful. In my previous open-water swim I'd been able to settle into a rhythm of alternate-side breathing, having a set point in my count to sight ahead of me that I'd felt I'd be able to keep up for ages if I had to. Today? Nope. Whether it was the wind (which was coming from behind us on the first stretch) or just the nervousness, I seemed unable to cope with anything other than breathing on the right. And then my cap started to come off. After several attempts to fix it back on while treading water (and getting more frustrated each time) I had to call over a canoeist to have something to hang onto. Eventually I got it on again and away I went, now lagging far behind everyone else. I managed to make it around the buoys at the turning point, but was drifting right badly. I finally got back into the lane and then did reasonably well simply following the cables strung between the buoys rather than trying to look ahead. I knew it was going to end at some point when the side of the exhibition centre hovered into view again. I even caught up to some other guys in my wave, although they looked to be doing breaststroke. And then, 10m from the end, my right calf decided to cramp up. I managed to somehow thrash onto the pontoon but couldn't stand--- but at least I was out of the water.

Fortunately the marshals were on hand--- they sat me down, poured Gatorade down me, and helped me get the top of my wetsuit off. I remember one saying it looked pretty tight and I quipped that they just don't make them in my size. Once I'd had some fluid and stopped feeling dizzy, I was finally able to go on. I got through the fun London system where you have to take off your suit on the dockside and carry it in a bag to T1. Finally I arrived at the bike just glad that part was over.

I put on cycling kit and shoes and jogged the bike to the mount line, and off I went! 10m later, the wheel sensor for my computer fell off. This was not my day.

I picked up the sensor and stuffed it in a pocket-- I didn't feel like trying to reattach it, so just did the ride with only a vague idea of what speed I was going at any given time. Two laps of the bike route--- the first half upwind, the second half downwind. The first lap felt good, and by the end I was overtaking the end of the wave before me. The second lap was not so good, and I started getting overtaken by the wave behind me. Going through the near-deserted Limehouse Link tunnel was actually spooky. I got a salute from a couple of motorcycle refs—my hairband had been lost with the swimming cap mishaps, so I was sporting my best "shaggy dog" style. Towards the end I did catch up with some guys on what looked like brand-spanking new tri bikes with very shiny sprockets--- you take your victories where you can. And they turned out to be on their first lap--- result!

I got into T2 and changed shoes. I managed to actually jog out towards the run for once--- in duathlons in the past, this was the point where my legs became amazingly uncooperative. The run itself turned out to be... not as bad as I'd thought it might be. I was helped somewhat by the plentiful supply of free gels, energy drinks, and water (all mine!). Also, due to the route being around the dock, you could see where you were headed for. I could feel I wasn't going particularly fast, and I was getting passed a hell of a lot more than I was passing, but at least I was keeping going and only slowing down for drinks, and for those cruel cruel ramps back up into the hall for the halfway/finish point.

When I finally came in for the finish I was able to put on a bit of a spurt, but nothing spectacular--- I was cooked, which suggests I'd budgeted my energy about right.

So finally it was over! The total time, in fact, was 3:16. Of which the run was almost dead on an hour--- which was actually a lot better than I'd thought I was going, and the bike was 1:20, dead on 30km/h (18.6mph). Which, again, for a mountain bike after a swim doesn't seem too bad... although I think if I'd been able to see my speed I might have pushed it a bit more. Also, my halfway splits for the run and bike are almost exactly even, which I think is a good sign. Of course, this leaves a 47-minute swim...

So was it fun after all that? Hell yes. Next year? Hell yes. Shaving five minutes off each of those? No problem. Sounds familiar. We're all crazy to be doing this, right? 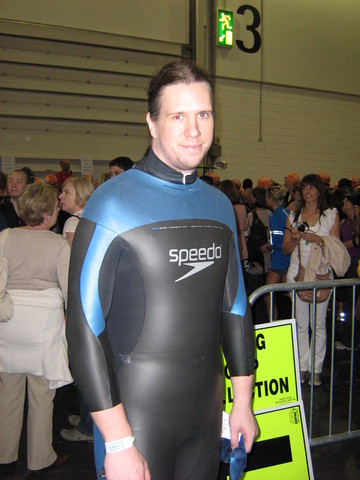