Soon after I got married, I decided I needed to get motivated to work out and focus on getting back into shape. I could barely jog a quarter-mile without needing a walk break.

Soon after I got married, I decided I needed to get motivated to work out and focus on getting back into shape. Paying for the company gym didn't help since I didn't go, the weekend hikes were too infrequent, and my previous attempts to jog were short-lived - as soon as the weather got bad I headed indoors to hibernate. I could barely jog a quarter-mile without needing a walk break.

My husband became my coach, in a way. He'd done a marathon and several half-marathons, but never a full triathlon. I had talked about wanting to do a sprint triathlon before, so when he suggested we try training together, I was all for it. We found one six months away and set that as our goal. We started taking regular walks on the bike trails nearby, adding in short jogs as I felt up to it. It rained sometimes, and once it actually snowed, but we were out there every weekend, and I started going to the gym to use the treadmill. Within a month I could jog a full mile, and I added another mile the next month, and another the next. At that point I knew I could run a 5k and that gave me a big confidence boost. Sure my pace was slow (12 minute miles), but I was doing it. When I added the fourth and fifth miles, I also got my pace up to 10 minute miles.

We added in lap swim training four months out. I worked on swimming the full race distance (750 m) without kicking off from the walls, and then tacked on more distance. I swim breaststroke best, so that's the stroke I stuck with. I'd swum in open water before, although not as part of a race and not in particularly cold water. My biggest fear was that the glacier-fed lake where the race was held would be too cold, even with a full wetsuit. In fact, we did a test swim in the lake two days before the race and it took me almost five minutes to get over the shock and to swim normally.

I hadn't owned a bike in almost 20 years, so buying a new bike was daunting. I went with a mountain bike and got road tires for it - not as race-friendly as a road bike, but it suited me just fine. We started bike training about three months out, primarily on the same flat trails we ran on. We didn't do a lot of hill training until a few weeks before the race, so hearing that part of the bike course involved a long climb had me concerned. Finding out we had to do that course four times on the bike had me rethinking this whole plan.

The swim-bike bricks weren't bad at all, but the first bike-run brick was shocking. My legs felt like stumps and we'd only gone half the bike distance. About a month before the race we put all three together and did the full race distance. That, more than anything, made me realize that I wasn't just going to survive it, I could really do it.

This particular sprint triathlon was small, and geared towards newbies and non-competitive people (although there seemed to be plenty of returning, extremely fit people!). We got there pretty early and set up our transition areas. My husband's bike was scratched and had a broken cassette, but luckily he was able to borrow a replacement bike just in time. We had agreed to stay together - he could easily have outpaced me in any part of the event, but we were competing for fun and it was comforting to know he would be there with me.

Race start time was 9:30 am, and everyone started in a single wave of about 95 people. The water was extremely cold to me (about 68 degrees), but I knew what to expect and got into the rhythm pretty quickly. We were stuck in a pack the entire time, which was occasionally frustrating but not bad overall. T1 was tough because of the full wetsuits, but we soon got on the bikes and hit the road. That big hill was the worst - I ended up in my second to lowest gear for most of it, but after the first lap, it got easier. T2 was a bit slow because I had to change shoes and shorts. The run itself wasn't bad at all. My legs didn't feel wooden, but I had no sense of what pace we were going (it turned out to be about 10.5 minute mile pace). I grabbed a small cup of water at the first water stop, but that was it for hydration the entire race. Coming up to the end, with our relatives cheering us on, was a great feeling.

Our final time was 2:06. That's now my goal to beat at the next tri. My husband is also hooked, and he's dying to see what he can do on his own. Now that I've done one, I know I can go it alone next time.

Things I'd do differently: drink more water to avoid the post-race dehydration headache, train with the same shoes for bike and run, wear better bike shorts to prevent chafing, and train on hills earlier and often. 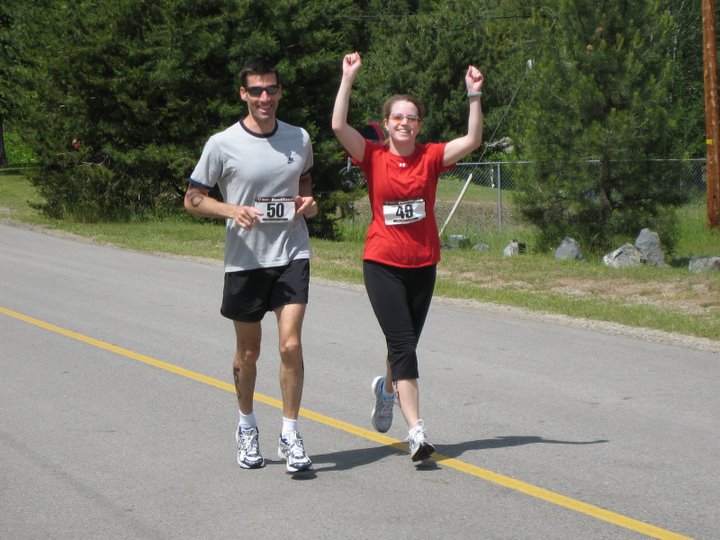