Two years ago I weighed in at a hefty 280 lbs and was a mess. Now I'm a lean 180 lbs and train daily. What a difference healthy eating, exercise, and self discipline can make!

Philippians 4:13 - "I can do all things through Christ who gives me strength."

Well, here I go, my first triathlon. Just think: Two years ago I weighed in at a hefty 280 lbs. and was a mess. Now I'm a lean 180 lbs and train daily. What a difference healthy eating, exercise, and self discipline can make, huh?

Back to the race... I got all of my stuff together the night before. I set my alarm for 4:30 since I had a 45 min drive to the transition area. The morning of the race, I loaded my stuff and my bike and off I went. I pre-registered and picked up my packet the day before so my arrival was pretty simple. I showed up, got body marked (136), got my chip, and set up my transition area. Since this was my first tri, I wasn't exactly sure how to setup the transition area for such a crowded race. There were almost 700 athletes. I think I rearranged my transition setup four times, putting my towel and shoes beside, behind, in front of, and finally behind my bike.

To warm up I hit the rest room and walked around a bit, mentally trying to focus on the task at hand while soaking up the atmosphere and culture. I realized quickly that I stood out as a "newbie" because I knew nobody and basically had beginner’s equipment. I had to put all of that aside, but found it difficult because of my competitive nature. I made sure to hydrate, had a gel, and headed over to the swim area as I was in the second wave.

The swim was awful from the start. My initial thought was to start in the middle so that the fast swimmers could take off and I could maintain my pace, which had been a consistent eight minutes for the 400 meters throughout my training and preparation at the pool. After the first wave left, some of the swimmers went out to the start line to tread water until the horn sounded for us to go (wasted energy if you ask me). I waited until about 30 seconds to start. The horn went and I swear every fast swimmer was behind me and ran me (and lots of other swimmers) over. It was a freaking mad dash. There was hitting, kicking, pulling, (basically you name it) going on with no care who was in their way.

After about the first 150 meters of me going all out (so that I didn't get completely run over) I was out of gas and had to revert to my backstroke. My plan was ruined. I swallowed so much water and must have had a stomach full of amoeba and bacteria.

Let me say that if you are a first timer, no matter how well you trained and how good a swimmer you think you are, start in the back of your wave for your first tri.

I rounded the buoys maintaining a slow pace because of my complete exhaustion. There were a couple of other stragglers from my group back there with me, but for the most part everyone was on their way to the beach. I heard the horn sound for the next wave, knowing at that point I had been in the water for five minute and wasn't halfway home. Continuing to pace and occasionally revert to my recovery stroke, I kept moving and eventually got close to the beach. Around that same time the leaders from the group behind mine had caught us and ran over us (again) just as the first group had.

I don't completely blame them though because it's not unreasonable to think that we should have been out of the water already. Finally ashore I saw my wife, daughter, sister, brother and niece and thought, "I can do this. The hardest part is over." But I felt very discouraged about my performance in the water.

I got out of the water and over to my bike. I toweled off my feet, slid on some socks, and put on my shirt, helmet, wristband, and headband. My shoes were already clipped in so I would slide my feet in once I got on the bike. Then I was off running with my bike and off to race. After clearing the ride line I got on and couldn't get my feet in the shoes. I stumbled around for a minute trying to get my feet in securely. Finally I did and was off.

The ride felt great. Once I got clipped in I rode with what I perceived as some top notch riders. We rode in a small pack passing a lot of slower riders. We alternated the lead taking turns drafting safely (not too close as we don't want one of those penalties).* It was certainly evident to me that money equals speed.

One of the riders in our group was a woman who kept encouraging me to push it harder and go with her. I wanted to be careful not to empty the tank yet. Eventually she took off and I thought to myself, “That's an aggressive pace, I doubt she'll keep it up.” Continuing on I went to take a drink of my G2 and forgot to unlock my bottle top after putting it in my cage so it slipped out of my hand and was gone. I made sure to unlock the other one. Good thing I had two, huh?

While riding, I thought about the transition. I realized that I should start with my shoes not clipped in and clip in once I got mounted. I also wished I hadn't locked my water bottle, of course. Overall I was very pleased with my performance on the ride and felt as though I made up a lot of ground that I lost during the swim.

Off to the run... I racked my bike, took my helmet off, and slid on my running shoes. The elastic laces are awesome and saved me so much time. I blew by a lot of people who entered the transition in front of me. I grabbed a water bottle on my way to the start and took a few sips. I poured the rest on top of my head and was off to run.

If I could do the transition over again, I would unclip my bike shoes a bit earlier so I could dismount faster. Possibly, I could leave my shoes in the pedals and slide my feet out after loosening the buckles. Overall, I was very pleased with the second transition.

The run felt good. I had a pacer behind me. We got to chatting a bit, once we caught our breath, and he was also a first timer. Since I was a few feet ahead of him, I told him that if he was comfortable with this pace we could run together and I'd pull him as long as he'd push me. We ran together the entire time. I didn't even see his face until we crossed the finish line and I gave him a pat on the back. As far as pace, we ran an aggressive pace, but not too hard. We passed a lot of runners (and walkers) along the way. It was a bit satisfying to pass the woman who blew by me on the bike and made me think to myself, "She can't keep up that pace, she's going to gas out." So when I passed her on the run, it was a bit fulfilling to know that if you stick with your pace and game plan, you'll pull through.

(Just to note, she did beat my overall time, though, since she started 10 minutes behind my wave, so it's not too satisfying. She is still a better tri-athlete than I am.)

Nearing the finish I picked up the pace and my buddy behind me was right with me. We crossed the finish line maybe two or three seconds apart. It was cool that they also announced, "Here comes Trevor Stultz from DeLand, FL" as I ran into the tunnel hearing the applause.

I gave it everything I had and was very pleased. 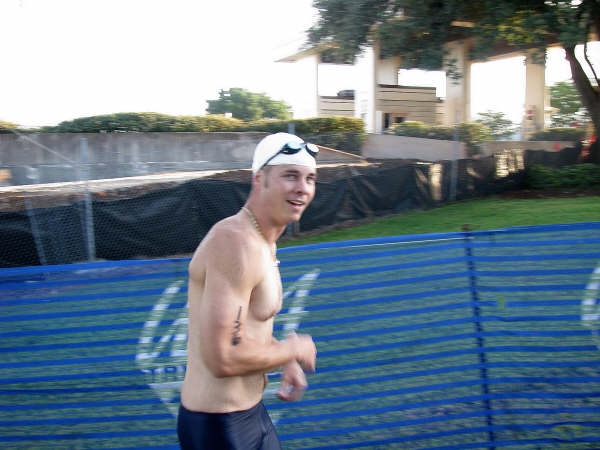 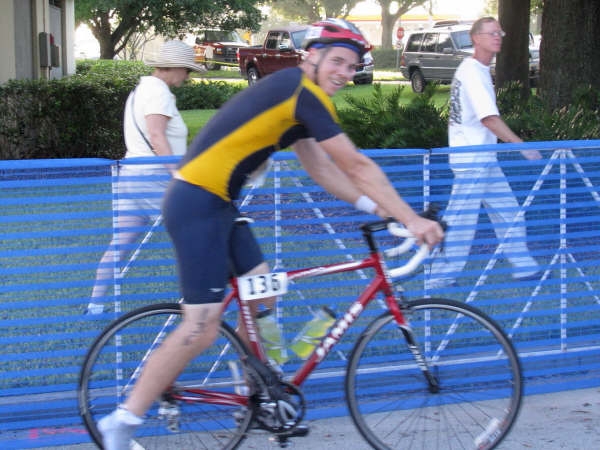 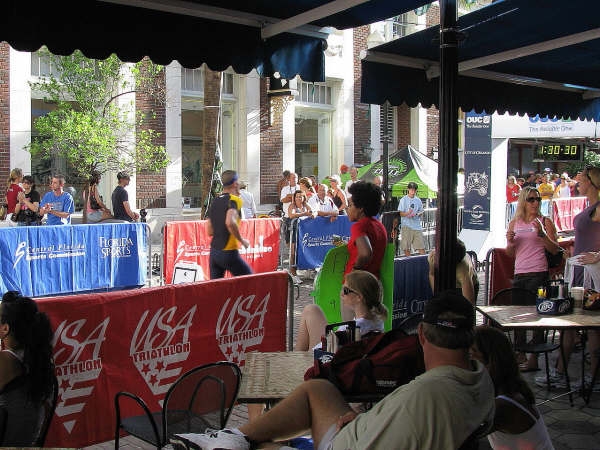 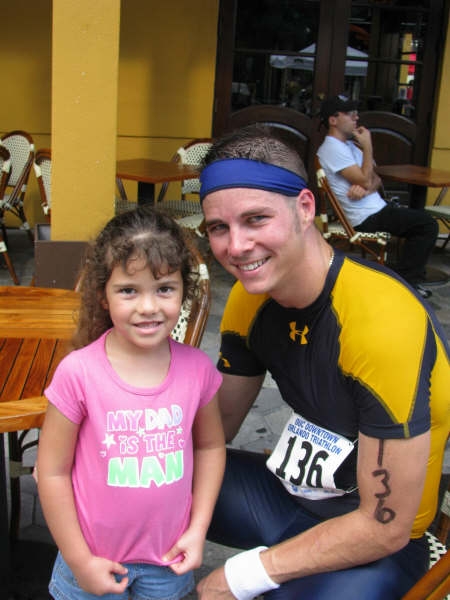 *Editor’s note: Drafting is illegal during sanctioned races, per USAT rules. All riders must maintain three bike lengths between themselves and the rider in front of them. Riding within three bike lengths is not only unsafe, but it will also result in a two-minute penalty. This penalty is not subjective, but rather is an objective measure intended to maintain fairness and the safety of all riders.
Rating