"These wheels are really fast and we can prove it with our tests from the A2 Wind Tunnel. We developed an ultra-fast modified V-Notch rim shape which keeps drag to an minimum."

The brainchild of three entrepreneurs, Karbon Speed is setting out to fundamentally change the way that high-tech carbon fiber aero race wheels are built and distributed using their unique direct-to-consumer platform. Unlike all of it’s much larger and more established competitors, you won’t find Karbon Speed’s sleek carbon fiber wheels in retail stores. Instead, you can only buy them online through the firm’s website. “Going direct (to the consumer), allows us to build a relationship with our end-users and ensures that the delivery of our brand experience is absolutely perfect and seamless from start to finish” remarked Justin Li, 32, CEO and Co-Founder of Karbon Speed. “It gives us the ability to do things like giving the customer a single price and not have to tack on sales tax and shipping. We take care of those things for you. That’s a huge help to our customers.”

Karbon Speed’s wheels may sell for less than the competition, but they are developed in conjunction with one of Li’s longtime friends, Pablo Bravo. Bravo, who is a Director at the San Diego-based aerospace engineering firm, Apical and earned his engineering degree at Stanford, worked with Li and his partners to make sure that their product lived up to it’s namesake.

“These wheels are really fast and we can prove it with our tests from the A2 Wind Tunnel” said Bravo. “Numbers don’t lie. We developed an ultra-fast modified V-Notch rim shape which keeps drag to an absolute minimum so you can keep your speed up with less energy.” “If you don’t want to read our testing data, just look at our customers results. We had three First Place finishes just last weekend across the country,” according to Li, “the results are on our social media pages and our website. We can’t make this stuff up.”

Karbon Speed was founded by Li and his two business partners - Brian Walters and Glynn Turquand. If those names sound familiar, it’s not a coincidence. Walters and Turquand made a name for themselves pioneering the direct to consumer model as the owners of Xterra Wetsuits. Li and Turquand were frustrated by the insanely high cost of buying their own triathlon race wheels for their personal use, but it was Walters who pushed the trio to do something about it and drive innovation in the wheel market.

“We’re on a mission to bring the absolute fastest wheels possible to the triathlete and do so in a cost effective manner with five star customer service and cutting-edge innovation,” said Li. Li, who started his career with the performance eyewear manufacturer Oakley, Inc., is obsessed with innovation and design in every area of the business. “I can’t wait for customers to experience the full range of what we have in store at Karbon Speed. It’s going to be absolutely epic.” 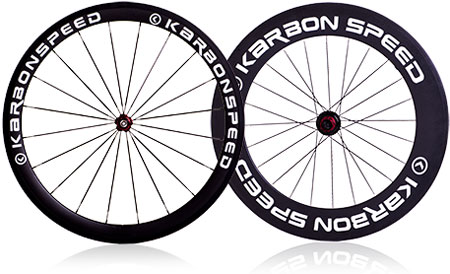