New Book: As the Crow Flies

Boulder, CO, USA - October 8, 2012 - One year ago, Craig Alexander broke a 15-year course record to win his third Ironman® World Championship. His new book As the Crow Flies, just released in time for the 2012 Ironman World Championship, tells the complete story of his history-making season. As the Crow Flies: My Journey to Ironman World Champion reveals Crowie's approach, his training, and the relationships that delivered the race performance he says was a decade in the making. As the Crow Flies is now available in bookstores, bike and tri shops, and online. For more information, please visit www.velopress.com/crowie.

In his own words and through striking photographs from acclaimed sports photographer Paul K. Robbins, Crowie shows what it takes to race at the elite level-and how he balances the work of triathlon with his first priority, his wife Neri and their young kids Lucy and Austin.

Epic workouts, grueling travel, record-setting race performance, giving back to sponsors and the sport-these are the tools of Crowie's trade, not to mention sleek wetsuits, cutting-edge time trial bikes, and technical footwear. And while those who know the sport of triathlon intimately will say that performance is determined by how triathletes put the three disciplines together, As the Crow Flies shows that winning major races comes from working toward excellence in every aspect of the triathlon way of life.

In As the Crow Flies, Alexander reflects on his entire 2011 and early 2012 season, bringing triathletes inside his head during key workouts, training blocks, and pivotal moments in big races. Crowie struggles through injury, illness, and changing sponsorships, revealing the delicate balance between elite performance and disaster. On the road to Kona, Alexander won the Ironman 70.3® World Championship, making him the first person to "do the double"; win both world championships in the same year.

To Crowie, the hallmark of a great career is the ability to perform consistently and to be versatile as an athlete. At age 39 and coming off his first-ever sub-8 hour win at Ironman Melbourne, Craig Alexander shows in As the Crow Flies how he has prepared to win again this October at Ironman Kona.

As the Crow Flies  offers triathletes and sports enthusiasts a beautiful, intimate, and honest portrait of the life and work of professional triathlete Craig "Crowie" Alexander, five-time triathlon world champion and one of the sport's most successful athletes. 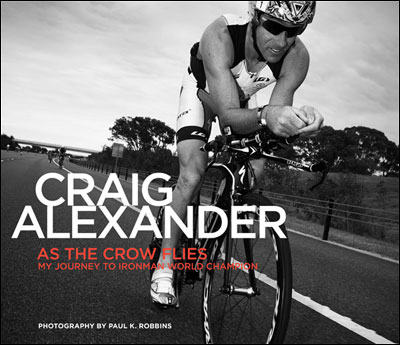 Praise for As the Crow Flies:

"As you will discover in reading this book, it's no wonder Craig is one of the greatest triathletes ever. As the Crow Flies is filled with riveting stories of commitment, setbacks, focus, and keeping it old school. He is ready for what's thrown at him, whether in training, racing, or life itself." - From the foreword by Greg Welch, 5-time triathlon world champion

"In his book As the Crow Flies, Crowie has done something different. His simple and direct dialog about a period of time when the pressure was highest and the spotlight shone brightest on him gives a solid sense of who he is and what the public already senses about his solid moral compass in every part of his life surrounding his sport. Crowie's book will not disappear into bookshelves once it is read-the magnificent photography helps narrate the story and makes it come to life and seem more real. I read about his workouts, races, or circumstances, then looked with new eyes at the photographs again and again. As the Crow Flies is a spectacular avenue in which he has chosen to share himself and his achievements." - Paula Newby-Fraser, 8-time Ironman World Champion

"As the Crow Flies invites readers into Craig Alexander's private life for a never-before-seen glimpse of what it really takes to be world champion. Paul Robbins' photography captures Craig's life in intimate, revealing detail and offers a rare perspective on his legendary work ethic. Paired with Craig's veteran insights, advice and storytelling, this book is a must-have for every fan of the sport." - Julia Beeson Polloreno, Triathlete magazine editor-in-chief

"I saw Craig for the first time competing in an Olympic-distance race in Pacific Grove, California and, without forecasting his destiny, I recognized his uncanny and innate ability to draw on his internal will and passion to excel.His incredible journey is captured in this brilliant book As the Crow Flies. Not only does it cover his Ironman world record in Kona at the 2011 Championships but it pictorially  captures the true essence of the highs and lows of an incredible person and a phenomenal champion." - Dave Scott, 6-time Ironman World Champion

"There is a lot more to Crowie than what we see on the outside. Photographer Paul K. Robbins has been able to go in deep and beyond that surface. It is the photography in As the Crow Flies that for me truly captures the essence of all those quick, fleeting personal moments that make up Crowie's sporting world and family home each and every day." - Delly Carr, award-winning sports photographer, World Photography Academy Inductee, Nikon Sports Photography Ambassador