In November of 2000, I noticed that I was losing the feeling in my toes. The sensation traveled up my body and within a week, I was nearly 80% paralyzed.

It was then that I married my wife.  Two years later we moved into the house that we built.  This was quickly followed by the birth of our first son.  In November of 2000, I noticed that I was losing the feeling in my toes.  The sensation traveled up my body and within a week, I was nearly 80% paralyzed.  The doctors informed me that my condition was temporary, but that it could continue to progress over the following two weeks.  I would then begin to recover  The time and extent of my recovery was unknown.

After a brief hospital stay, two months of rehabilitation and two years of depression and healing, I began to find myself again.  I soon realized that during my recovery, I had developed a few new habits.  Eating, smoking and drinking beer had become significant parts of my life.   I was smoking nearly a pack and a half of cigarettes each day and my weight had shot up to more than 220 lbs.  My blood pressure was on the rise and I generally felt crappy all of the time.  I had to change.

I quit smoking on August 1, 2008 and ran a 5k on August 23.  I purchased a road bike in early September.  After training for a few weeks, I rode 68 miles in a local charitable event.  It was around this time that I began considering triathlons.  I enjoyed cycling and running wasn’t too terribly difficult.  Why not add swimming and attempt a triathlon?  I had been a want-to-be surfer most of my life.  This would be a breeze.

I became lazy and the weather made it difficult to train.  In the process of lounging around the house, I was able to find 10 of the pounds I had lost.  Before long, it was April and I hadn’t trained in six weeks.  I put in a few runs and rides before hearing about a local triathlon.  I considered it and dismissed the idea very quickly.  After a night of beating myself up for undoing my progress, I signed up for the event, scheduled for the 19th of April at 7:30am.  It was a bit longer than a sprint triathlon, but I was committed to the event (.6 mile / 16 miles / 4 miles).  I couldn’t wait, but I only told 3 people.  This was going to be my little secret.

I didn’t do much beyond organizing gear and planning for the event.  This left a great deal of time for uncontrolled periods of thought.  Typically, this is dangerous for me.  I kept thinking of the time nine years prior.  I remembered how I felt trapped.   I knew I had been given an opportunity to LIVE again.  For the first time in nearly nine years, I wanted to remember every sensation.  I felt like my ability to complete this event would somehow prove that I had LIVED and that I had fully recovered.

I made it to the event quite early and began to carefully organize my transition area.  Having no experience, I simply picked one of the closest racks to the entrance.  As it turns out, this was prime real estate.  Shortly, I found myself surrounded by the elites.  A bit intimidating, but I knew there was no chance I would be in their way.  This was the last I would see of them before the award ceremony.

Soon it was time to make our way to the starting chute.  We walked down the beach for what seemed like an eternity.  I heard a few garbled words and a loud horn.  This was it - I was going into the ocean.  It was cold, the waves were large, the buoys were much farther out than I expected and a sensation of panic began to rise in me.  I knew I should have trained for the swim, but I thought I could gut it out.  I had no idea how overwhelming this experience would be.

Shortly after the start, I considered swimming to shore.  I didn’t think I was ever going to catch my breath.  Finally, I began to calm down and I rolled over onto my back.  I began to make progress and before long I was alternating between a simple breaststroke and a backstroke.  I assure you, this was not an impressive display, but I managed to muscle through.  I took about 30-seconds to lay in the shallow surf and soak up the moment.  I’m sure the others were a bit surprised by this, but I’ll always remember that feeling.

My plan was to take my time on the swim and during the transitions.  My goal was simply to finish, so I walked quickly to my gear and began preparing for the ride.  I took a few minutes to clean my feet, gather my things and put on my riding shoes and socks.  I set out on the 16-mile ride and loved every minute of it.  I didn’t realize that the T1 time would be added to my ride time.  This hurt my time a bit, but it worked out.  In a flash the ride was over and I found myself back in the transition area.  My feet were quite numb, so I took time to wake them up while changing shoes and socks.  This added a good bit of time to my run.

I felt pretty good and took off on the 4-mile run.  I made it approximately one-third of a mile from the transition area before realizing that I forgot to wear my number belt.  I remembered reading that this was required at the finish line, so I began walking/running back for the belt.  Once I had it, I took off again and had a great run.  My run time was terrible as I essentially ran 5 miles, but this was a valuable lesson for future events.

What a great sight!

I turned the corner and saw the flourish above the square.  I also saw my oldest son, born only three weeks before I became paralyzed, my wife and my mother.  I felt more alive than ever before.  I actually did it!  I fought the fear and doubt and finished my first triathlon in 2 hours, 15 minutes and 47 seconds.  I don’t know that I will ever have that feeling again, but I WILL be searching for it.  My next event is in June and I’ll be ready.

See you out there. 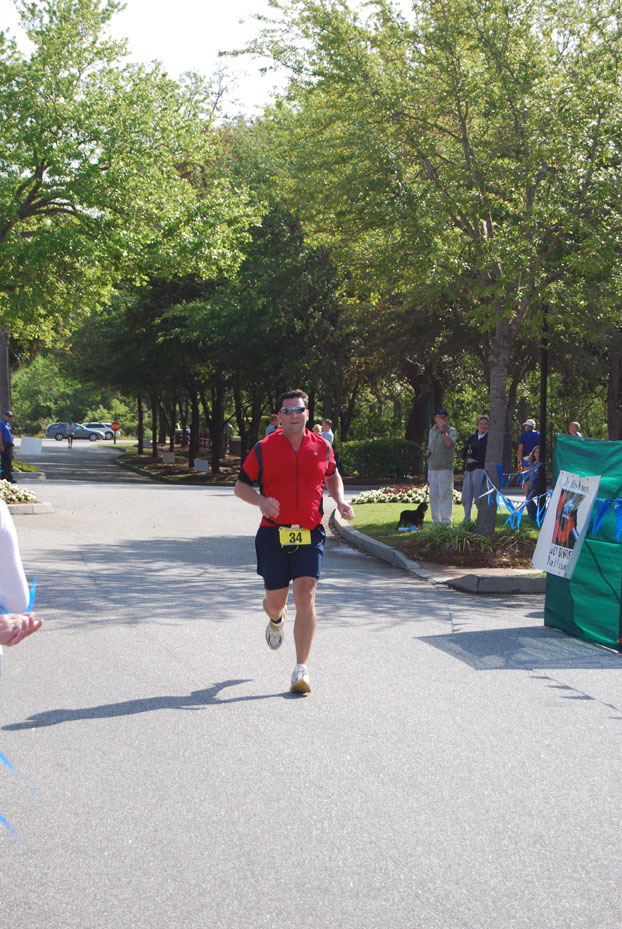