My First Triathlon: From a Poorly Navigated Swim to a Smile at the Finish Line

A look back at my first triathlon at Parlee Beach.

I had planned to wake up at 5:30am. My first triathlon, a Sprint distance at Parlee Beach, was set to begin at 8:30am and I wanted to get there with plenty of time to setup my transition area and get the most out of the experience. My daughter was apparently excited for me and woke me up at 4:30am (she is only 2 months old, so I guess I can’t really blame her).

One baby bottle, a quick shave and a look at my checklist and I was off. It was finally starting to feel like I was actually going to compete in a triathlon. I stopped to get a coffee for the 25-minute drive ahead, and somewhere along the way, got something in my eye. I spent the entire drive rubbing my eye, trying to dislodge whatever bug or debris had snuck in there. All I needed was to go through my first triathlon with one eye closed.

I arrived at Parlee Beach around 6:30am and found the registration building. With my watery eye and TriNB card, I went inside to sign that form that says you’re out of luck if you crash or drown. 601, my timing chip number, was Sharpied on my hand. My name went in a drawing to win a Cervelo road bike and I was on my way to the transition area. 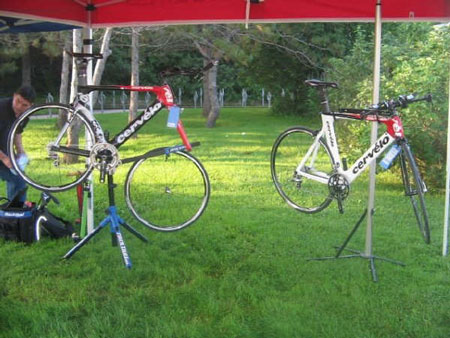 I was the first to pull into the transition area, so as a tri-rookie, I was a little confused about where to go. One of the officials who happened to be standing nearby must have seen the confused look on my face, and explained how the transition area was divided to allow a certain number of racks for Olympic and Sprint distance triathletes, as well as Olympic and Sprint distance duathletes. She pointed me in the right direction and I started to prepare my transition. As the first person there, I was able to secure the best (in my opinion) spot. I racked my bike, pointed toward the transition exit, and tried to remember all of the tips I had learned from the BT articles and videos that constituted the majority of my coaching. Helmet placed upside down on my bike with sunglasses inside (arms pointing up). Socks rolled and placed on top of my running shoes. Water bottle full of Gatorade and three Powerbar gels taped to the crossbar of my bike. I was ready to go. 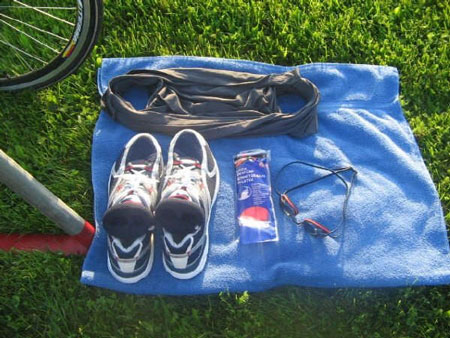 As the racks began to fill with bikes I had only seen in pictures on the Internet, I started to feel a little nervous. My eye was finally free of debris and I had time to spare before the race (the Sprint distance would only begin once all Olympic distance triathletes had finished the swim), so I walked down to the beach to check out the starting line. The sand had been groomed as far as the eye could see and the lack of wind left the ocean without a single wave. The sun was shining, but not hot. Conditions could not have been better. I made my way back to the transition area, alternating between a slow jog and a walk, and began to don my swim gear...I mean, swim cap and goggles. 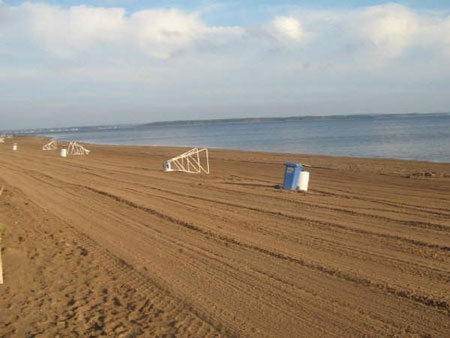 It was time for the Olympic distance race to get under way. As the air horn blew, my nervousness turned to excitement. I watched as men, women, young and old, swam toward a buoy in the distance. It didn’t look so far. “ I can do this,” I thought. The loop was 750m, so as the final swimmer made it out of the water to round a marker and begin their second lap, I made my way back to the transition area one last time. I took off my t-shirt and track pants and immediately realized how out-of-place I looked. My bike, though not of excellent quality, looked similar to many of the other bikes and I could blend in and compete with the runners. To start the race though, I was the only participant without a wetsuit and my pale skin stood out against the sea of black neoprene like a Corn Pop in a bowl of Cocoa Puffs. In any case, I hadn’t come this far to back down now. There was no pressure. As long as I finished the race, the day would be a success.

With the sound of the horn, we were off.

As soon as I began the swim, I could feel the adrenaline pump as I tried to keep up with the other competitors. It didn’t take too long, however, for me to realize that this was not going to happen. I slowed down to a reasonable pace and kept moving forward. After a few minutes, I noticed that the feet kicking in front of me were gone. Was I that far behind that I couldn’t see any splashes? I lifted my head out of the water (which I then realized I should have been doing more), only to discover that I had been swimming diagonally across the swim course loop! What could I do? With a sigh of disgust, I turned my body to the left and made my way back to the loop. I can only imagine how my bright orange swim cap looked, cutting across the open water. At least I learned the importance of watching where I was going.

As I rounded the final buoy and began the last stretch of the swim, I just repeated over and over to myself, “Socks, shoes, shirt, glasses, helmet, go!” These six words continued to play in my mind as I exited the water and ran to transition. When I found my bike, I quickly dried my feet, put my socks and shoes on, threw on my shirt, removed my sunglasses from my helmet and put them on, grabbed my helmet, put it on, fastened the chin strap, and thankfully took hold of my handle bars and started running. The swim was over!

The bike portion of the race was far less eventful, thank goodness.

For the Sprint distance, we rode three laps around a 7km loop. There were a few small hills, but the course was relatively flat. I may only have passed one person (on a mountain bike), but it was the competitors passing me who instantly made me fall in love with the sport. Everyone says that triathletes are the friendliest people you’ll meet, but I didn’t truly appreciate or understand that fact until the bike. Every person who passed me gave me some words of encouragement and a smile. Everyone. “Lookin’ good!” “Keep it up!” “Nice day, isn’t it?” “Almost there!” I couldn’t help but smile back and say “Thanks”, and push myself a little harder.

With each lap, I ate a Powerade gel pack (a quantity which I will definitely reduce next time) and drank some Gatorade. The gel packs just didn’t do anything for me, and I hadn’t planned on how to discard the wrappers, so I just stuffed them in the waistband of my shorts. Going forward, Gatorade will do the trick. Maybe I’ll have some kind of energy food in the transition area.

As I peddled down the last hill and saw the transition area through the trees, the fact that I would finish my first triathlon seemed more real than ever. All that was left was a 5km run! I ran my bike into the transition area, racked it, and took off my helmet and sunglasses. 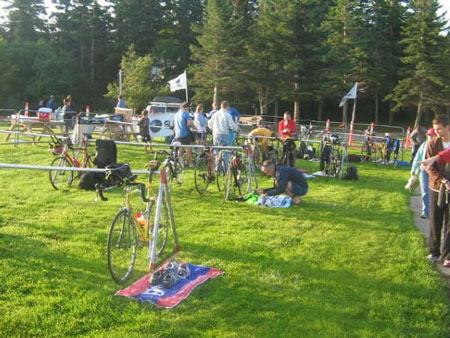 On with the run.

I never expected the feeling that came next. I felt rested from the bike (I obviously didn’t push myself hard enough), so I thought the run would be a breeze. When I took my first few steps, my calves felt like they were going to explode through my skin! I figured this would go away quickly, but for the first 2km, each step felt like my muscles were about to spasm. Next lesson, make sure to practice biking and running consecutively before race day.

After the first 2km, things started to settle into place, and I found my pace (much slower than I had expected). The kind words from my fellow competitors continued as they passed me on their way to the finish line. Again, I smiled and said “thanks”, and pushed a little harder. On my way back, after the 2.5km turnaround, I couldn’t help but to lend some words of encouragement to those who were still on the first 2.5km. “Keep it up!” “The turnaround is just around the corner!” “You’re almost there!” I can only hope that my words helped someone to push a little harder.

I think I smiled the rest of the way to the finish line.

I had done it. I was officially a triathlete! 17:22 for the swim, 52:31 for the bike, and 27:16 for the run. My first triathlon took 1:37:09 to complete, definitely leaving room for improvement, but what matters is that I finished, and that I finished with a smile on my face! It has taken me almost a year to put these words down, but I’m glad I did. Since last summer’s triathlon, I have competed in a Half Marathon and a Sprint Duathlon. I am now training for a Marathon in October and plan to do two or three triathlons through the summer. When Parlee Beach comes around again, it will be the Olympic Distance for me. This year’s goals: stay on track during the swim, push a little harder on the bike, enjoy the run, and smile. 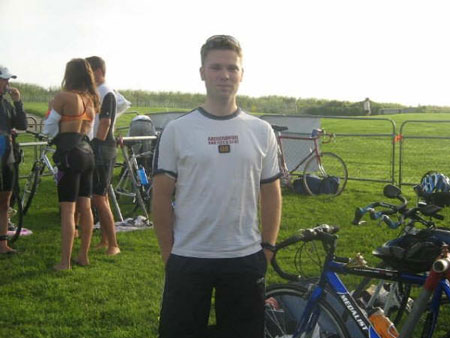