Not a swimmer? You can still Tri!

Story of a canoe-run-bike tri

I thought about doing a triathlon ever since one of my best friends from high school did an Ironman two years ago. Also, my brother has been doing sprint tri's for a while. I just couldn't get the swimming down! My sister-in-law asked me to do the West Milton Triathlon with her. You canoe four miles, run back to the park five miles, then bike 17 miles. Although you can go solo, most people have a partner for the canoe. Her partner was not able to do it. Would I like to? I was already running four miles about three times a week, so I said I'd think about it. Well, a five mile run and an eight mile bike later, I told her I was in.

I was a soccer star back-in-the-day - an All-American in high school, Division I college scholarship soccer player. But that sure seems like a long time ago as I am 39 now, a married mom of four kids, and eeking out 10 minute miles. I really had to put the pride aside and enjoy the experience. I quickly learned that cycling would be a new love for me. For training, I used Triathlon Training in Four Hours a Week by Eric Harr and followed his Level III Fitness Enthusiast plan. But for the days he had for swimming, I sometimes ran a short run. To train for the canoe, my brother took my sister-in-law and I on the actual canoe trip we would do for the race. He had done this race several times and all his tips were immensely helpful! We knew to wear old shoes and bring our running gear in a secure plastic bag in case we tipped over. We knew whether to go right or left when the river split and how to get out of a jam if we got stuck. It gave us a lot of confidence for the race.

Race day was beautiful. It had been super humid the day before as there were some over night storms. This helped raise the river a bit so there was less chance of us running aground somewhere. We had to carry our canoe ourselves (!) and we were blessed to have one of the early start times of 8:11 am (they only start two canoes at a time). Some people didn't begin the race until 9:30, so if you are going to do one of these, sign up early! My brother and his canoe partner started at the same time as us, but one team wasn't paying attention and missed their start time, so they went in with us, too. It made for a rushed start, but that was ok. Once we got going, I was thinking, this is just so beautiful and I would really enjoy it if I didn't have to stay so focused on paddling!

At transition, we had to really paddle hard to ram our canoe ashore, then carry it ourselves (note: my sis-in-law is also a soccer player, we are NOT known for our arm strength!) about 30 yards to a grassy area where we quickly opened our bags, dried our feet with towels we had in our bags, threw on our socks & shoes and we were off on the run.

I ran the first three miles at a 10 minute/mile pace and couldn't feel my legs the 4th mile so I slowed to an 11 minute/mile pace, then cranked out the 5th mile at about a nine minute/mile pace. I was sooooo excited to get to my bike! The run is the worst part for me and it was almost over! (I prefer to run when chasing a soccer ball! ha-ha) I also love this tri because you run BEFORE you bike!

The bike route has a huge hill as you leave the park. I flew up it. Then a few miles later I was going up another long hill heading east, I flew up again! I felt like I could do this every Saturday! Then I headed south on the route and realized I was in a cross-wind and the wind had been at my back on the way out. I turned back west to head in. It was like being in a wind tunnel! Just brutal! Eight more miles, I could do it! I kept thinking of that pint of Graeter's Blueberry Pie ice cream waiting as my reward! I saw a cardinal with three miles to go that reminded me of my grandpa who passed away. He was telling me I could do it! And then I realized I could make my goal of under three hours! I arrived at the gate to see my family cheering me on...it was amazing! I did it in 2:52!

When I got home, my husband and kids surprised me with a trophy they had gotten custom made with my name on it! I said I was a Triathlon Champion! It was soooo sweet!! So even if you don't swim, remember you can still Tri! 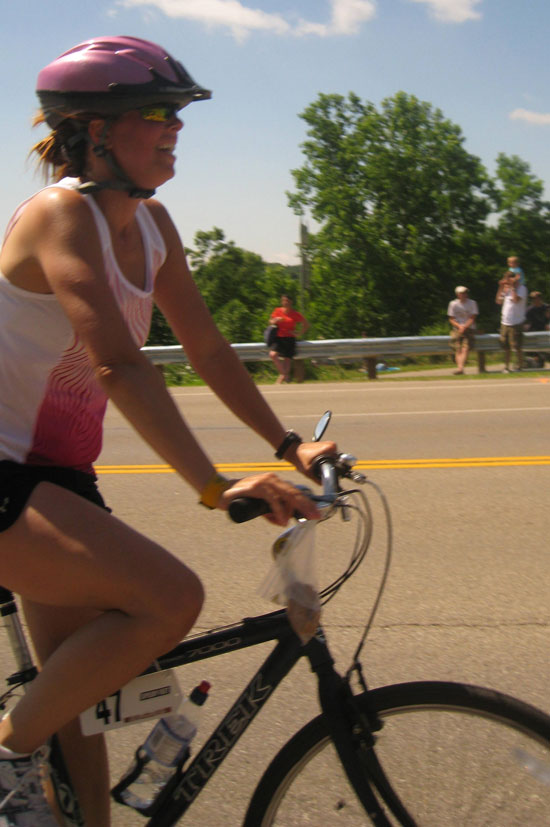