My First Triathlon! (Oh what a day!)

A day of mistakes, learning and accomplishment! One of the best days of my life!

I did it! I completed my first triathlon this year.  Right after I ran my first 10K, my friend Lauren approached me about the upcoming Cleveland Triathlon.  I laughed at her. Little did I know that only four months later I would be crossing the finish line.

After I convinced myself I was going to compete in the sprint distance, I talked with my husband about the idea. He jumped at the chance to train with me. We are both very athletic and play a variety of sports together year-round including flag football, softball, and snowboarding.  We started by figuring out a training plan. Knowing that swimming was going to be our weakest event, we chose the swim focused plan from beginnertriathlete.com.  And we were off!

Our training went well.  I saw the most improvement in my swimming. We trained at our local recreation center in the pool.  One GIANT mistake…we never swam in open water until the day of the race.  Bad, bad, bad idea. I knew throughout the training period I needed to get into open water but my schedule was so busy. It seemed like I kept saying, “next weekend, ok now the weekend after that…” And before I knew it, the triathlon weekend was here!

On the day of the race, we got up at 5:00am and did one last check of all of our stuff we needed. We were on the road at 5:30am greeted by a chance of thunderstorms, an overcast sky, and rain.  I was getting really excited and feeling really confident.  We went to the transition area and set up our stuff.  The rain let up and we didn’t hear anymore talk of thunderstorms.  Before I even realized what I was doing, I noticed my husband walking over to the starting area. If it was time for him to start, that meant I started five minutes after! I started to get nervous.  Finally, we were up.

Lauren and I made our way down the dock and prepared to jump in.  It was a deep-water start.  As soon as I jumped in I swallowed a mouthful of Lake Erie water.  Yum!  The group we were in struggled for separation.  Everyone was hitting everyone else while treading water.  Then, the buzzer went off and my anxiety attack began!  The mass of bodies knocked me around a few times and I had trouble getting started. We had a .5-mile swim.  I tried to start up and get into a rhythm but every-time I would pick my head up I would swallow more water.  I could not breathe and I was struggling.  The main portion of the group quickly moved ahead of me.  A woman swimming next to me asked if I was ok.  I responded yes but I was having trouble breathing.  I heard her say to me, “You can do it!”  Yes.  I could do it.  I had swam this distance and beyond countless times.  It seemed like an eternity.  I never found a good groove and I never felt comfortable.  But I did not give up.  I climbed out of the water and as I walked up the deck, there were my parents waiting to give me a high five!  That was a great feeling.  I did it!

My transition was smooth.  Next was the bike portion.  I started off.  I did not pass a single person and everyone was flying by me.  We had two eight mile laps to do around the memorial shore-way.  (After the race was done, I was reading quotes of the winners, all who mentioned the shore-way was a very difficult bike pass.)   As soon as I got onto the course I realized my bike chain popped off!  I thought to myself, great!  So I climbed off and fixed the chain.  And just my luck, it happened two more times.  I was having some issues with changing gears!  I didn’t lose that much time but it did take my momentum away.  After my first lap I ended up following a guy in front of me.  After 30 or so seconds, I realized I had exited the course without being done! What a day! Now I know I need to pay more attention! I peddled back up from the transition area and was back on my way!  All along the way I kept seeing cyclists blow by me, but every so often I would hear, “Great job! Looking good!” Everyone was so supportive!

I finished the biking and got ready for the run.  As I began trucking it up the hill to start I saw my family walking towards me! They were jumping up and down screaming my name and rooting me on.  What perfect timing! Just knowing they were there gave me an extra boost!  The rest of the run proved to be difficult for me.  I was able to push through the heavy legs but I began to get bad cramps.  I slowed to a brisk walk just a couple times.  And each time I heard people around me yelling that I could do it!  So I started back up again.  As I was rounding the corner by the Rock-n-Roll Hall of Fame (just a short distance from the finish line) I heard my cousins screaming my name from across the harbor.  I picked up the pace!  As I crossed the finish line I felt like crying with happiness.  My family and friends were all there cheering me on.  I had actually done it - though a little slower than I wanted, but I finished. That was my goal for my first triathlon.

Looking back, I now know what to expect.  I am going to compete again in the next Cleveland Triathlon but I am going to change my training a lot.  I have never felt so proud!  Both my husband and Lauren’s time was quite a bit faster than mine but they were so supportive!  This was one of the greatest days of my life and I will never forget it! 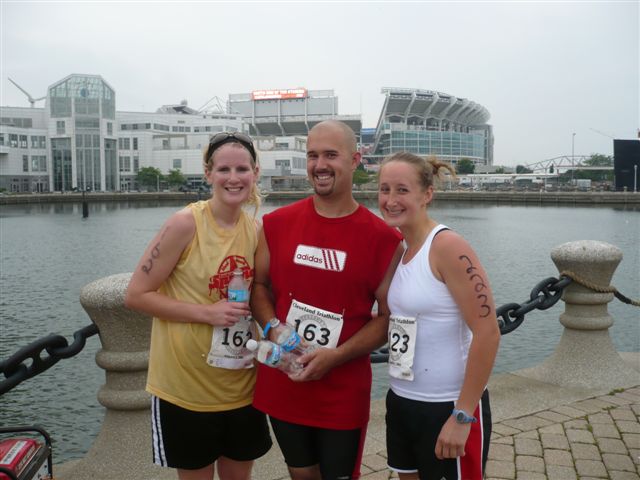