Ambition or Stupidity? My First Triathlon

One slight problem. I don't know how to swim at all. When I say 'at all', I don't even dog paddle because I am scared to death of water. But I am going to do this.

About three years ago my husband and my daughter brought home a nice surprise. A puppy! A very sweet, lovable little black lab that we named Macy. Being Macy's main caretaker during the day, I decided a walk in the park would be nice to get her extra energy out and it might even help me get off the couch as well. Up until this point, I had no regimen of exercise and my body was beginning to show it! I had gained 30 lbs over the last few years. So I was using this dog as motivation! The walk quickly began to turn into trail running. It hurt like heck in the beginning and my friends would laugh at the heavy breathing, but over the next six months I could actually run 3 miles without stopping and was losing weight. What a concept. With that said I joined a local training group to run a half marathon. Three half marathons later it turned into triathlon training, I'm not sure how but it did. I dragged every friend I could find into this madness as well.

One slight problem. I don't know how to swim at all. When I say 'at all', I don't even dog paddle because I am scared to death of water. But I am going to do this.

A lady in my running group is part of a local triathlon club and invites us to a meeting. Ok, no harm, no foul. Right! My husband, John, is as excited as I am. What do you know, they are starting a group training for indoor triathlons during the winter season. I am even more excited now because they say they can teach me to swim. In the back of mind, I am thinking, "they are losing money!" They have no idea that when I say I can't swim, that I truly mean I CAN'T SWIM. Let me fast forward this story...

One important lesson learned first. If you can't laugh at yourself, who can you laugh at? I am well aware of my limitations. Swimming is definitely one of them. But I get up three days a week and go to the pool and punish myself. I did go through a time that I hated the swim portion so badly that I didn't train like I should have but since then I have learned that it is not like cramming for a test. Another lesson learned. Got it, train, train, and more training! Moving along....

When I started this idea, I registered for the White Lake Sprint II. I needed a goal. I waited for registration to open and sat by the computer and got John and I in. We trained hard together and had a ton of fun doing it most days. Four months later and here we are. Bags packed and we are headed to White Lake. My nerves are in check. I spent plenty of days during the week panic stricken. Sunday is creeping up on us. I watch the Half Ironman on Saturday and was in awe of the athletes. The day is hot and windy and they did it! It will definitely take a year of training for that. Saturday night is upon us and we all go out for a good dinner and lots of salt! I have never seen so much salt used at one table, ever.

A good nights sleep under my belt and John and I are off. We park, we pump tires - or so we think. Someone thought they put air in my tires when really they took care of their own bike and forgot all about mine. It was fine, the race had a tent set-up for these types of things. Transition area was setup and ready. Then they call the water temperature. Too warm to be wetsuit legal. DREAD! That is the only thing I can call it. They do say we can wear the wetsuit but we will not be point or award eligible. I make the decision based on the fact I am not going to win any awards or points for this race. I just want to finish. Whatever that means in the USAT world, I am wearing my wetsuit. 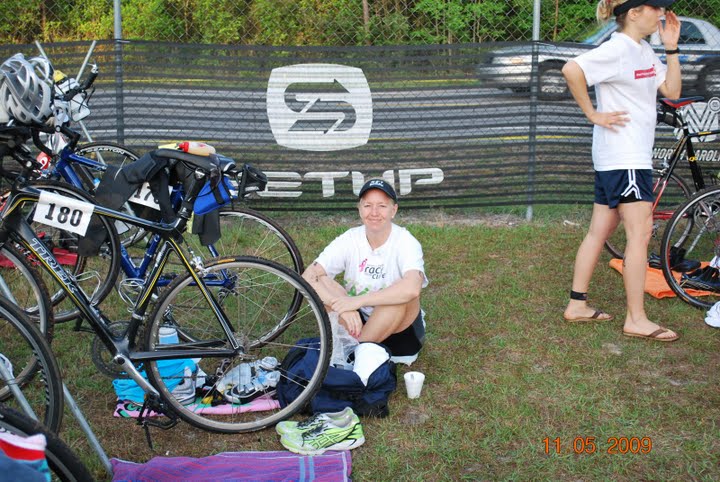 I am surrounded by people who have trained with me, loved me, and coached me! They are encouraging and all the while I am sure they are worried. Because, I am worried, more like scared to death as I look out at the water. I get in the water to warm up and I feel great. I get to the line and my goggle strap breaks! I feel a little panic welling up but a friend, Jenn, calms me. The countdown is over and we are swimming. Slow, steady strokes is what I tell myself, then BAMB, I get kicked in the head. BAMB, someone runs into me! I don't have to tell you what happened next. PANIC sets in and it doesn't leave.

My husband then swims up near me and offers to give up his race to stay with me. He didn't want to leave me out there. I cry as I type that! Because he had a special reason for racing yesterday. It was for his mom who a few of you know passed away a couple of weeks ago. I couldn't do that to him! I wanted him to go, even if it meant leaving me in water that I felt like at times would swallow me up. You know you're in trouble when the men in the rescue boat are standing up watching you and asking if you're ok, waiting to jump in and save you! "Boys, I got it, it may not look like it or feel like it but I got it, Thanks".

I am positive God placed angels in that water to help me. I round the second buoy and then there is the orange blow-up man swishing in the wind. I can do this, I can do this...who cares if I am last! I wasn't, but almost! I get out of the water and of course I am mad at myself, but I remember what my coach said, there is no finish line at the swim exit. So I get started on pulling that wetsuit off and I run. Smiling because I got out of that damn lake and I can now move on to something I can do - ride my bike! 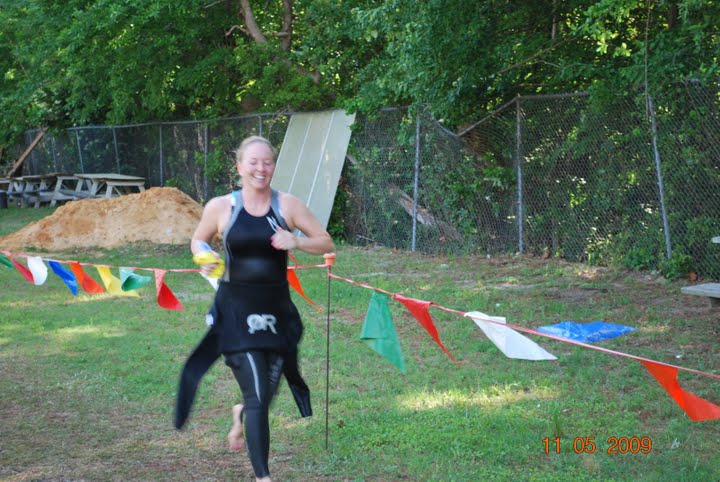 Damian did not let me down. My friend Jill, Christina and I have named our bikes...Damian, Lucifer and Delores. Jill is not as fond of her bike yet and Christina is just such a happy-go-lucky person that we named hers a happy name! I get started on the bike and I say to myself, "the swim is over, forgotten, just ride." I do just that, I passed plenty of people that I know got out of the water before me and that made me smile. I came up on a kid that had '14' on his leg and I yell out, "hey kid, it is Mother's Day, let me pass you!" Look, you do what you can...don't worry, he caught me.

14 miles later, I am ready to run. I rack my bike, I get my shoes on with water bottle in hand since I drank no water during the bike ride because I lost my water bottle. The road was rough in some spots. I know I needed to drink, I dehydrate easily. I get started running on legs that feel like they weigh 400 lbs. I tried eating some sport beans as well, but I couldn't open them and run with a bottle. I walked and got my beans in and started again. Then mother nature took over and I need the bathroom. I swore I was not going to stop to use the bathroom during the race. Lots of lessons learned for the next race. So I added a few minutes there. I wanted to stay at 30 minutes but oh well....you know I didn't know how long I had been out there, I didn't wear a watch on purpose. My goal was to finish this race and I did!

When I came down the finishing stretch, all of my friends where there with my husband and I heard them screaming my name. I knew I had arrived. It just didn't matter how long it took me in that lake. It didn't matter how long it took me on the bike or to run. I had FINISHED something I didn't ever think I could. In this lifetime I never thought I would get in a lake and swim. I have plenty of friends who can attest to this. I overcame a fear that has plagued me since I was a very young child. I DID IT! I cried! I have never felt anything like that before.

Four sprint triathlons later, my swim has improved, not by much but I am hopeful. What I love is that it doesn't matter. I remind myself how many people are at home on their couches wishing they were motivated enough to get up and do something for themselves. Well with the help of a beautiful little black lab, I did! I am hooked and can't wait to see what the coming year has in store for my new life as a TRIATHLETE! 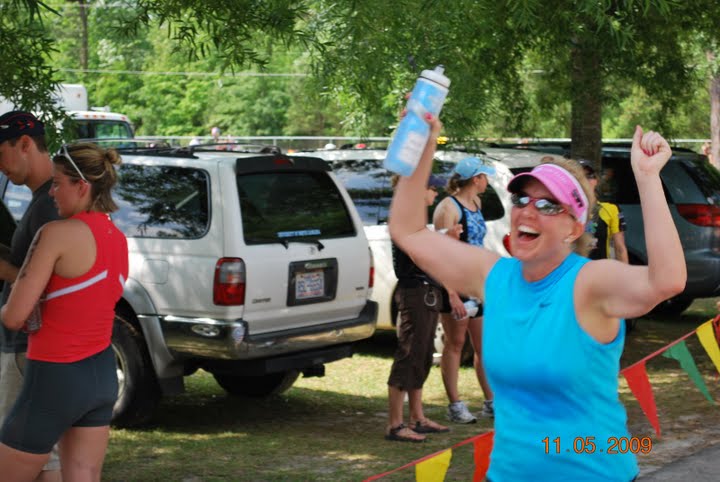 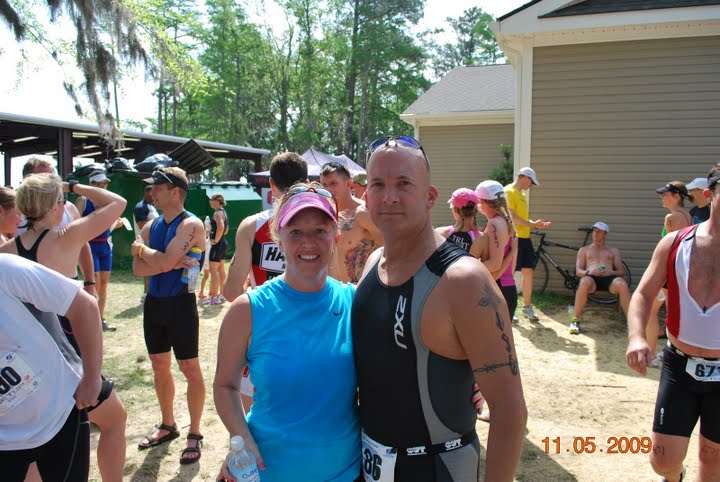