As the fog cleared, the buoy that I first saw earlier in the morning was just the first marker in a very long line of buoys that stretched across the lake like a runway for a 747 jetliner.

The night before my triathlon was a night of nervousness and readiness. I had my checklist in front of me and all of my equipment laid out on the floor.  I kept checking my list over and over again. I kept running through my transitions over and over in my head. I knew I had to get some sleep but I just did not know how. I hit the sack nervous and ready to face the day and what it was going to bring in the morning.

I woke at 4:00am and I wanted to make sure I had plenty of time to stretch and eat a small breakfast before heading out to the race. I spent a good thirty minutes stretching before I headed out, I focused most of that time on my legs to try and get my IT band to stay as loose as possible, the foam roller really seems to help me the most. I ate a small bowl of raw oatmeal with a teaspoon of peanut butter and a small amount of honey, and soymilk.

I filled my aero bottle and two water bottles and loaded my bike and gear into the truck and headed to the race. When I arrived in the parking lot there was one other person sitting in his car drinking a big cup of coffee and I remembered that I did not drink my coffee before I headed out. I quickly felt ok with not having my coffee because I did not need any more tension to build on my already flailing nerves.  I sat in my truck and tried to listen to the radio to calm myself, but ended up just sitting in silence. I kept telling myself over and over that I can do this and I will do this, my goal is to cross the finish line and I will. At 6:00am the race coordinator arrived and started setting up the registration tables and various items to get the show on the road.

I unloaded my bike and grabbed my gym bag loaded with all of my equipment and headed towards the clearly marked transition area. I picked an area towards the exit of the transition area and did my best to take up as little space as possible. I laid out all of my gear in order of the race events and then started to walk towards the lake where the swim would take place. The morning air was very cool at 58deg and there was a heavy fog that covered the lake, like a curtain hiding something scary. I could faintly see a small bright orange dot that resembled a buoy about 50 yards into the lake, and thought to myself, “I got this no problem.” I turned away from the lake and headed back to the transition area.   At this time more people began to enter the transition area and setup their bikes and equipment. It was awesome to see everyone and their equipment. I kept wondering who was the best, but also knew that it didn’t matter and I was just ecstatic to be a part of an event that tested me physically and mentally. 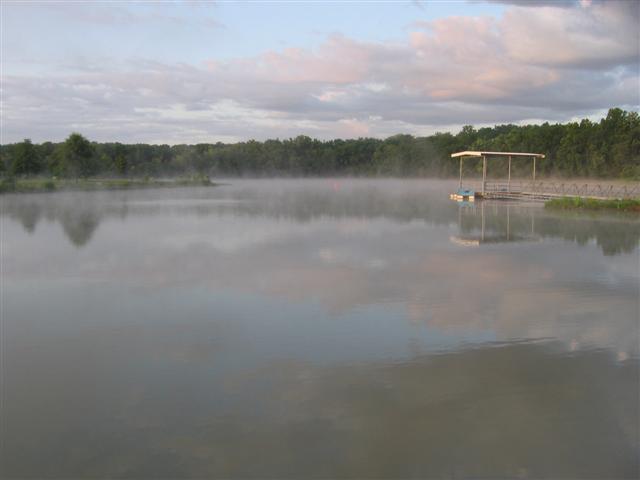 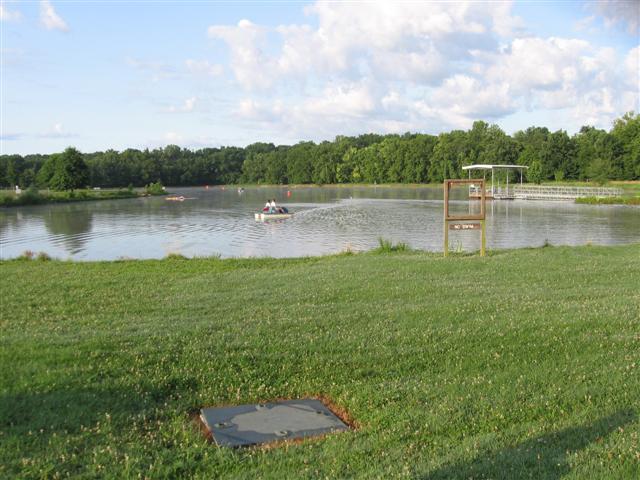 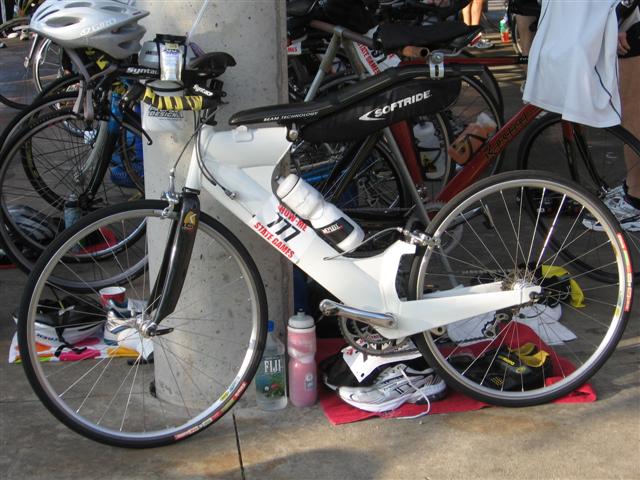 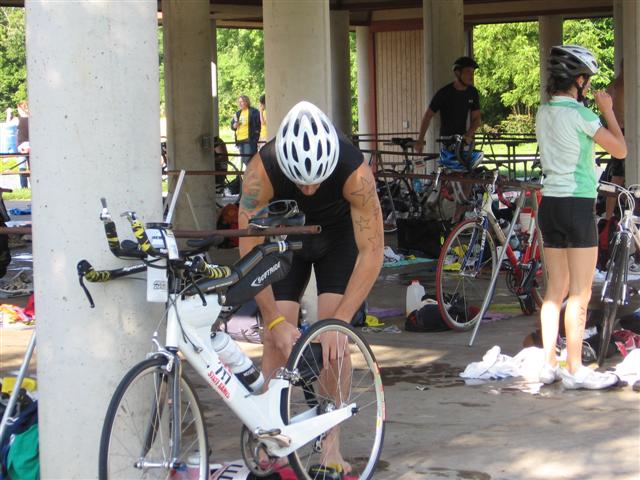 I started to make small talk with several people setting up around my transition area and quickly realized that everything I read was true, that triathletes are some of the greatest people that you could ever meet. There was a young married couple setting up across from me and they kept telling each other they could do it and they would be great. There was an older man probably 65 setting up his transition area lightly whistling a song as he checked his tire pressure. I was just in amazement of all the people attending the race from all walks of life. As I was chatting with a guy that was racing in the relay I could hear a lady behind me sounding very concerned about the swim, I turned to see her and as I spun I caught a glimpse of the lake again, the curtain like fog had cleared and it had revealed something very scary. The buoy that I first saw earlier in the morning was just the first marker in a very long line of buoys that stretched across the lake like a runway for a 747 jetliner. My heart skipped a beat and I quickly understood why the lady was concerned. I started to tell myself in my head to pace myself and take my time, smooth gets me to the end, I can do this. I turned away from the lake once again to get that dreaded swim out of my mind, but it hung around. At this time my fan club of family and friends arrived to cheer me on. I felt 100% better about the swim and race once they arrived. It was like a weight was lifted from my shoulders.

I heard the yelp of a bull horn and the announcer broadcasted that registration was open. I stood in line with my waiver signed and in hand ready to get my race number. The lady that looked for my name amongst the others was very chipper and you could tell that she was very happy to be volunteering. I got the number of 777, lucky triple 7’s she said with a smile, she then made a comment about needing all the luck I could get with a swim like that as she pointed her clip board towards the lake. I grinned and said thanks. 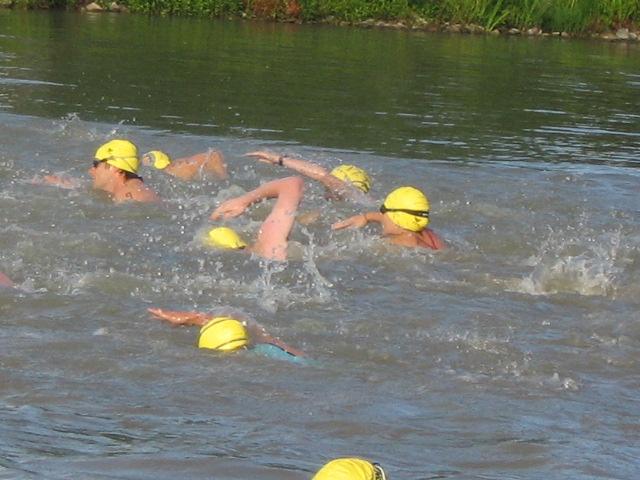 The announcer went over race rules and talked about the bike course, and before I knew it I was walking into the water with my swim cap pulled over my head. I found myself standing next to the young couple in the back of the pack. The swim was divided into two waves of people: the first group 40 years old and younger and the second group 40 and older. A short countdown started and the words GO GO GO, started the race. I made sure to stay at the back of the pack to not get in the way of any of the faster racers. I soon realized that I would have been better suited in the middle of the pack because I now found myself swimming around others trying to keep on my pace.  I never fell into a good rhythm and just chugged along switching from backstroke to freestyle. I stayed with a group of about five other racers that all swam at the same speed that I did, all of us not staying with the same swim stroke for more than a minute or two. I rounded the big buoy at the end and started making my way back to the shore. At this point I could also see the 2nd wave of swimmers closing the gap on me pretty fast. When I arrived at the shore I exited the water with the 2nd wave of swimmers.

I swayed to the transition area like a drunken sailor trying to get my legs to work.  I found my bike and as quickly as possible got all of my gear on and headed out on the bike. I had no watch or way to time the race but I would guess my transition time was around two minutes. The swim was slow and steady and I knew that it would be that going into the race, but I also knew that the bike would be my strongest event. I headed out of the park and saw the first course volunteer pointing to turn right, I made my turn and started to make the first of many climbs of the day on the bike. It felt great to rise out of the saddle and put some power to the ground. I topped the first hill passing two people on the way up, the first that I passed yelled out, “Good job, keep at it” and the other saying, “Go get 'em.” It felt great to hear someone that I was racing with rooting and encouraging me on. From that point forward I made sure to tell everyone that I passed on the bike course “good job, keep at it.”

I was passed twice while on the bike by what appeared to be two rocket ships constructed out of carbon fiber. The entire bike course was hilly and a lot of fun. I kept pace with a female rider who rode at the same pace that I did, I made sure not to get too close so that it didn’t look or feel like I was drafting. We charged the hills and the short windy leg out in the country. This was the first time since starting to train and prepare for my triathlon that I have ever rode with another person and it was great, we pushed ourselves feeding from one another’s pace back and forth.  I made sure to pace myself on the bike so that I would have enough energy for the run.

Before the race I was reading reviews of the bike leg and read that the bike course was a 10 mile loop that you rode twice equaling 20 miles. I started to descend a very step long hill that led back to the entrance of the park knowing that I had hit the half way mark for the bike leg. I passed the entrance and started my climb back up the hill that started it all and the course volunteer started yelling at me and flagging me into the entrance. She kept yelling, "You’re DONE go run, you’re DONE!" I stopped and stated that I thought the bike course was two laps, she smiled and said it’s one twenty mile loop. I clipped back in and rode back to the transition area. Each time I entered the transition area I could hear my fan club yelling for me, it was great and they gave me even more motivation to get at it! 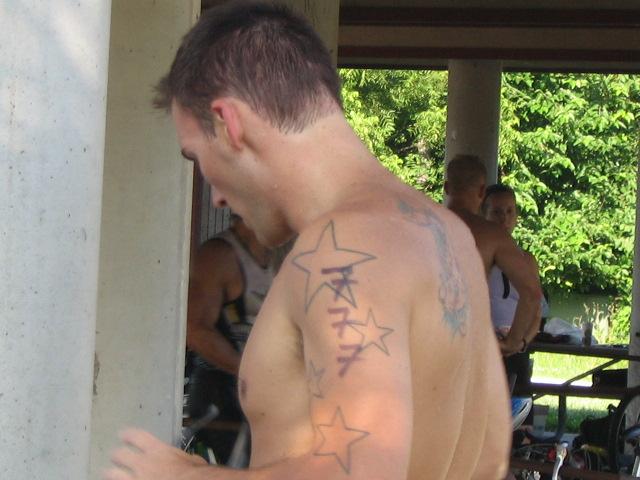 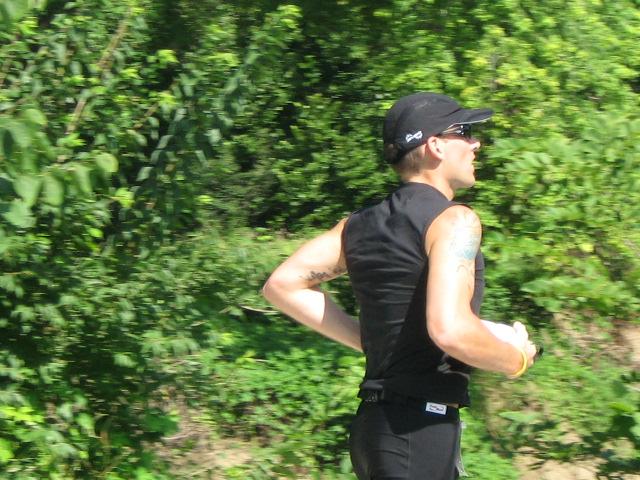 I jumped off my bike and racked it and tried to get my hands and legs to work again. After a short little battle with my socks, I won the war and was off and running. My ITBS leg felt a little tweaky but it did not hurt. The run was 5k along the lake and down the Katy trail to an orange cone and back. I kept a slow and steady pace and told myself that I was not going to stop running, I was going to finish this without stopping or slowing down. Once I saw the orange cone I knew it was almost over and for the last half of the run I had a smile from ear to ear, I just couldn’t shake the smile. I crossed the finish line to hear my friends and family yelling for me. I think they were just as happy that I had just completed my first triathlon as I was the feeling of crossing the finish line was a feeling that cannot be explained with words. It has to be felt and those who have felt it know the power behind it.

I finished the race with a time of 2:06:34, not too shabby for my first triathlon. I stayed around the area to listen to the announcer call out the winners and their times. While standing around one of the guys that I spoke with before the race found me and congratulated me on fishing my first triathlon, he also made a comment that I will never forget “you are now a triathlete, congratulations.” 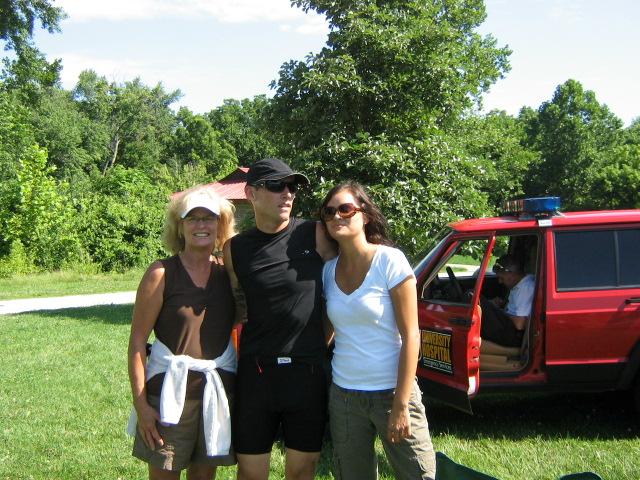 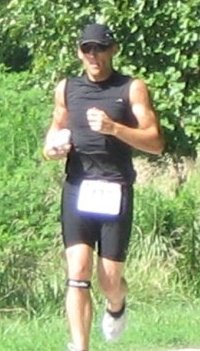