Yes I did it, I actually did a Triathlon

I lift my head to sight, thinking I must be pretty close to the first buoy already. My heart sank, I looked back and saw that I had only gone approximately 50 yards. This as going to be tough.

Yes I did it, I actually did a Triathlon. I decided to do one back in May when I had enough of being fat. Well I'm still am fat, just not as. For those of you who don't know there are several different levels of triathlon, a Sprint, Olympic, Ironman 70.3, and a full Ironman. With it being my first triathlon I decided to go for the shortest race and that was the Sprint. This race was the Jordanelle Triathlon , a 750 meter swim (in the Jordanelle Reservoir), a 12.5 mile bike ride and then followed up with a 5K run. I had been training for awhile and even followed a training schedule pretty religiously. I even bought my self a nifty triathlon two piece suit, borrowed my father-in-law's road bike (did you know Panasonic made road bikes? Yeah me neither!), and drove my wife up the walls with talk of the upcoming event. I think she was more excited for it to come than I was, just so it would be over.

Anyway, the day of the race came and we got up at 6 am to make it up there in time. Nikki stayed at her grandma's house that night and morning and it was a good thing because there was not a lot of stuff for kids to do there. We made good time on our way up there and made it up in about 45 minutes. We parked the car and I road my bike in while Kara took the shuttle with my bag. We met at the bus stop right inside Rock Cliff state park and we both walked to the transition area where I set up my stuff. At this point this is where I felt a little less than professional, but I was expecting it. People were there with all types of crazy equipment like bikes from Trek, Cannondale, Pinarello, Cervelo etc.

I also realized that the 12 pounds I lost was not enough to help me "blend in" with the crowd. These guys seriously had like 2% body fat compared to my 25 % (rough estimation, real BMI is probably higher). Anyway I set up my transition area and got ready for the swim. I had decided not to get a wetsuit due to the fact that wetsuits cost a minimum of $200 for the cheap ones and renting one is like $40 for the weekend. So I opted to just use my tri shorts and hopefully make up time by not having to strip off my wet suit after the swim. I think I was one out of about five people not wearing a wetsuit compared to the 250 other people who were. Oh, and wetsuits help you float too, just to let you know.

So the first wave of triathletes go. This was the men in the Olympic distance (Olympic is twice as long as the Sprint). Then the Olympic women. Then it was time for the Sprint men - that's me. I get in the water and boy am I wishing I had a wetsuit. Cold! But before you know it I got acclimated to the temperature (meaning my body went numb) and it's time for us to start. The horn goes off and, me being stupid like I am, started at the front and am suddenly pretty much run over by all the other swimmers behind me. (Note to self, start in the back next time until you know what you are doing.) So after my swim trampling I start to get into a pretty good cadence with my swim strokes and I lift my head to sight, thinking I must be pretty close to the buoy already (we swim in a triangle with three buoys as landmarks.) My heart sank, the buoy was so farther off than I imagined. I looked back and saw that I had only gone approximately 50 yards. This as going to be tough. But I didn't quit. I did flip on my back and do a lot of backstroke during the swim. At one point one of the life boats came up to me and asked if I was OK. I assured him I was and made some excuse of needing to reposition my goggles and that was the reason for my half drowning and panicked swim. All-in-all I got done with the swim in about 22 minutes. 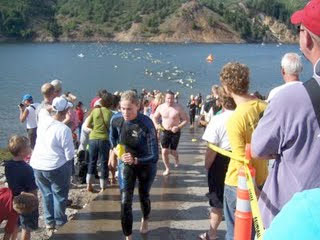 Yes that is me getting beat by a girl who started five minutes after me.  She wasn't the first, and she most certainly wasn't the last.

This was the calm before the storm.  I'm the idiot close to the front without a wetsuit, talking and having a good time. 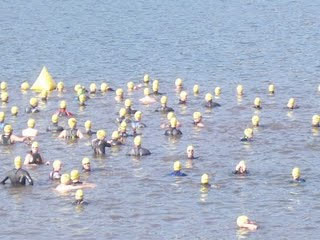 This is after the buzzer blew. I think you can see me getting run over somewhere out there. Look at all the smart people sitting back and waiting for the craziness to end. 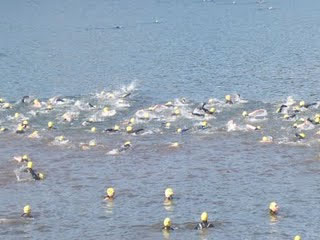 After the swim I had to transition to the bike, meaning I had to get my shoes, helmet, sunglasses, gloves etc., all on right after swimming a half mile.  If anyone has ever swam at all they know that after you have been swimming it takes a little bit of time before everything else returns to normal.  The reason for this is that you are swimming horizontal when we normally do everything vertical.  Needless to say it took me a long to time to transition (like five minutes) and even longer to get used to being vertical.

This is probably the best shot of me, because you can't see my gut. 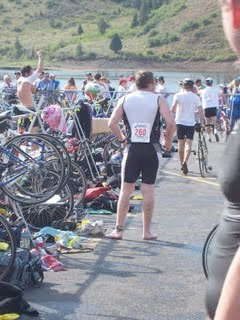 It took me about three minutes of my transition just to find my bike.  Seriously there were like 400 people racing that day.  We then proceeded to ride and I did pretty good considering it was my first.  I did get passed, but I also passed...someone walking. I felt so slow, and every time I heard someone fly past me on a triathlon bike with the big disk wheels I promised myself "one day I am going to pass some poor sucker just like me, and not just pass him, fly past him...or her."  It wasn't until halfway through the bike portion that I felt like myself again and then I really did pass some people.  This time I am not kidding.  I felt pretty good.  I had enough water, enough energy, and then the bike portion was over.  It was now time to run and this was where fatigue really kicked in.  I got a charley horse pretty early on and had to stretch it out and walk for a little bit but I really felt OK, slow but OK. 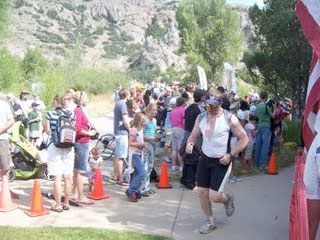 Did you know that they put a person's age on their leg during a triathlete.  They write their age and event on the legs and their number on the arms and hand.  It's to identify you just in case you die.  Anyway, during the run I am getting some wind back and this dude just flies past me.  I look down and see that he is doing the Olympic triathlon and then I look at his other leg...87!  What!  At this point my confidence shot way down.  The dude was 87 and he flew by me like he was driving a car.  87!  Well I felt like walking at that point, and I did walk for a little bit, I won't lie, I was tired.  But as the trail rounded out and we approached the midway point you could hear the crowd.  I kept going and I started hearing the soundtrack to Rudy in my head and I thought that this is really starting to get inspirational.  Then there it was, the end.  I crossed the finish line.  I had done it.  I had completed a triathlon and I hadn't drowned, got hit by a car or suffered from heat stroke.  The endorphins kicked in and I felt like I could do it all over again.  It was an amazing experience and I can't wait to do it again.   If you are concerned about your wife, tell her she gets something out of it too.  My wife got me to to lose 12 pounds and she got a free necklace from Overstock.com (it was part of the goody bag, so it made it all worthwhile for her.)  Triathlons are fun and they are addicting.  I can now call myself a triathlete (music start). 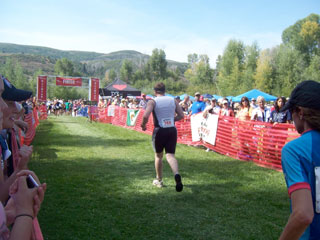 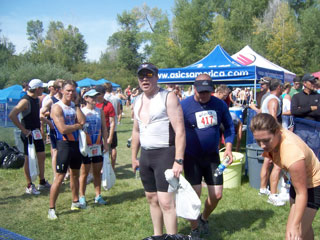