Hey, Why Not? An Impulsive Decision

I found a sprint, the Lake Las Vegas Triathlon, that was happening four months down the road and signed myself up; much to the surprise of friends and family.

After a 14-year-long career as a competitive equestrian, I was very accustomed to having a goal, being competitive, and having something to occupy a lot of my time. Unfortunately, life happens and we grow up, get married, and mommy and daddy stop paying the bills. This means the horse had to go and all I had left was a husband, job and college; a rather difficult transition.

One lazy afternoon while my hubby was snoozing on the couch, I was flipping through the channels when I stumbled upon a show about the Ironman in Kona. I knew what triathlon was but never knew the actual distances of the Ironman. Being a mere mortal, I was blown away at what these super-humans could do. Inspired, I went to my computer and Googled 'triathlons for beginners'. After a few days of consideration, I found a sprint, the Lake Las Vegas Triathlon, that was happening four months down the road and signed myself up; much to the surprise of friends and family.

Now for the fun part, training. I quickly invested in some nice running shoes and totally splurged on a Kestrel Talon. Hubby was just thrilled...not. I wasn't a track star in high school, hadn't ridden a bike in years, and spent most of my time sunbathing around the pool in a bikini rather than doing laps. Details! Come to find out, training for an outdoor event, in Las Vegas, in the middle of summer really, really sucks. It was either the treadmill (which I hate) or roughing the 100+ degree temperatures for the run and waking up at 5am on the occasional weekend to squeeze in a bike ride. Waking up in the wee hours on a Saturday is made even more difficult by the fact that I'm 22 and live in Vegas. My weekends usually consist of lazy mornings, all-nighters and maybe, just maybe, one too many cocktails.

The four months seemed to fly by and race day was quickly approaching. While I wasn't exactly running a 20-minute 5K and swimming 1000 meters non-stop, I felt okay. I can always doggy-paddle the swim and crawl the run right? I wasn't worried about the 14.44 miles on the bike at all. I figured it would be the easiest part. (Insert foot in mouth here) 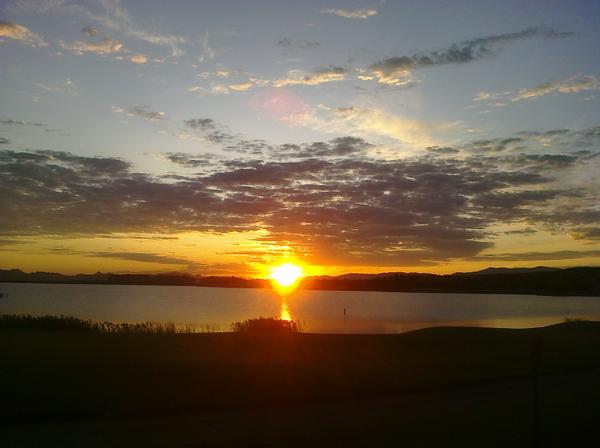 The day was here, September 12 which happened to be the day before my 23rd birthday. I had everything packed the night before so we were on the road rather quickly. I was used to the pre-event jitters after years of horse shows so I didn’t feel too nervous. We arrived, pumped the tires, got my body marked and played the waiting game. I wanted to watch the Olympic swimmers and get a peek at the buoys for the sprint. My first thoughts were, "Wait...those aren't MY buoys! No! That's way too far! Please tell me those aren't my buoys!" They were my buoys. Oh well, time to put on the big-girl panties and get it done. I waded in the water (with Metallica playing on the speakers, very motivating), the countdown ended, and off we went. I was about 10 strokes in when two words came to mind: Forget this. I breast and back-stroked almost the entire 0.55 miles. Oh yeah. I forgot to mention that this was my first time ever swimming in open water.

I made it out of the water and jogged up to transition. I quickly got on my helmet, shades, and shoes. I had bought a tri suit so changing clothes wouldn’t be an issue. I grabbed my bike and was off. This was going to be the easy part. Nothing could be further from the truth. The climbs were like stairs; one right after another with little to no downhill relief afterwards. I was crawling at a sad 6mph. I got passed by a man at least twice my weight on a mountain bike. C’mon $1,500 road bike! Do your job! I was convinced I was going to have to get off and walk if this continued. What goes up must come down right? Apparently not today. With one foot in the grave, I somehow made it back to transition, hung up the *&#^$%! bike, changed shoes and was on my way into the run. 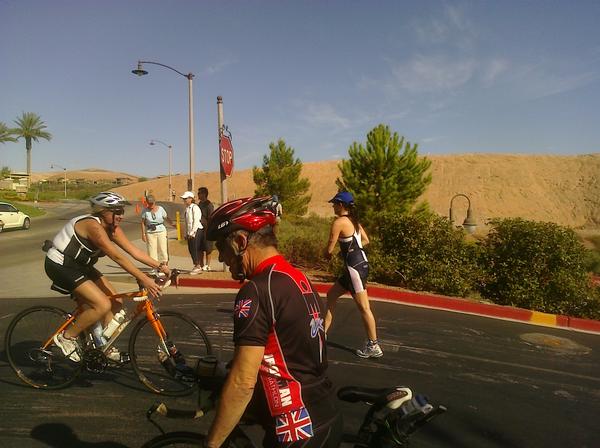 The run was equally hilly. Lucky for me, running can turn into walking whenever I please. If it wasn’t downhill or flat, I utilized this option. At this point, all I could do was smile when I saw the 10 year old boy headed towards me because he had already made it to the turn-around. After such a long, difficult ride, the run seemed to go by rather quickly. The sound of the announcer and cheering crowd got louder and louder with every passing minute. This was it. All I had to do now was round a corner and the finish line would be right there. I ran over the timing mat which let the announcer know I was approaching. He shouted, “Fallon Martinez! Hey, that’s a cool name!” and I mustered up everything left in the tank to sprint to the end.

My husband and dad were waiting for me at the finish and nothing is better than making the two men in your life proud of you. I got my finisher’s medal and wanted to wear it for the rest of the day. After a much needed shower and nap, we went out that night to celebrate. I didn’t even care that my number was still on my arm. I proudly wore it. We were out with friends until 2a.m. celebrating. Hey…it’s Vegas. Would I do it again? Yes! I’ve already signed up for another sprint next month. 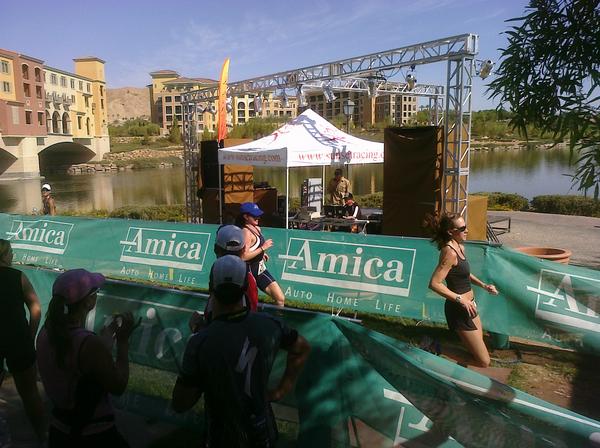