Lake Carroll on a Budget - My First Tri

The triathlon made a lot of sense as I could fit the training around early mornings and other times that wouldn't eat too much into my family time. Things never go completely to plan do they?

Well it's over, my first race and I'm tired but happy.

I decided to give this triathlon thing a 'go' about three months ago when I was back home visiting my family in the UK after a conversation with one of my friends.

I had told myself that I would do something like an Ironman by the time I was 40 and while walking with my buddy Chris and his dog, I realized that 40 was not that far away. We were chatting about what he had being doing with his summer and vice versa when it dawned on me that the mountain biking I had been doing and the running at the gym were fun but I didn't have any goals attached to them.  I'm also an avid squash player and had done several national tournaments last year but nothing this year as traveling to them and entering gets costly and I was wanting to spend more time with my wife and kids and less money on my hobbies.

I kicked the idea of triathlon around for the rest of my visit to the UK and by the time I was back in the US feeling bloated from flying and too much eating out, I had decided to look for a training program and a race.

The triathlon made a lot of sense (I thought at the time), as I could fit the training program around early mornings and other times that wouldn't eat too much into my family time. Things never go completely to plan do they?

I surfed through a few web sites and found BT to be easy going and informative, this was the place for me!  I signed up and scheduled into my calendar the 12 week training program with swim emphasis, then I looked for a race.  I knew I would need to register for a race as I'd loose enthusiasm without that goal, just like I was doing with squash and mountain biking (MTB).   The problem was I was very late in the season and I was only three weeks away from the Naperville Tri which is five miles from my house!  That was too close.  I chose the Lake Carroll Triathlon just based on location and time as it gave me just eight weeks until the race.

I had to then change tact and opted for a shorter plan, one of Higdon's eight week plans, over the 12 week BT plan. I figured I was at a reasonable level of fitness so I would make it in eight weeks If I could sort out the swim.

The swim. How difficult can swimming a 1/2 mile be?  Err, very.  I managed 100m without stopping my first time in the pool, I was terrible and came to BT for help. After many post readings and some solid advice, I was soon two weeks into the program and making 500m without stopping.  I got to be comfortable with 750m and even did 1500m one time, but I never bothered with intervals to get faster, I just concentrated on finding a pace I could do and stick with for the 1/2 mile.

We went on a family road trip to Michigan so I took the opportunity to swim in open water for the first time.  Boy was I glad I bought that used wetsuit!  It was cold but I enjoyed the challenge of the choppy water and the buoyancy of the wetsuit really helped.

The bike training was not difficult, a few extra spin classes and my usual MTB mileage was covering it.  The only thing I needed now was a bike - I toyed with the ideal of using my hardtail MTB as I already had it set up with slicks and a lock-out fork, but I went out with a road bike club last season on that bike and it killed me to keep up!  I ended up trading that bike for a road bike and that has worked out great.

Run training was mostly on the treadmill at the gym as the time slots I had available were mostly in the dark! I ran in my neighborhood a few times but I didn't enjoy that too much, so any runs I had in daylight hours were spent on my local trails where I ride off-road too. This proved to come in handy in the long run.

Other than being quite short of my hours on the road trip week, I did my plan.  Around came race weekend and my parents arrived for a week visit, they were coming with me and would be looking after my boy while at the race. We loaded my truck and set off on Saturday for the Trail Side Inn. It turned out the inn was very close to the event and we went and found the packet pick up and I got my numbers, 43, my boy said, "Is that your age daddy?" Cheeky monkey, made me feel old and nervous!

We ate well, I went to bed early and got up at 5:30am. I wasn't going to be at the transition at 5:25 waiting for it to open, that would make me even more nervous and I'd just spend the whole time giving myself a headache about what I'd forgotten. I got to transition at 6:15, the racks were numbered and I'd got the rack right by the bike exit, great! I set up my stuff and talked to some people who were all helpful and jolly considering it was barely 60deg and heavy fog.

The race was delayed by just over an hour due to the fog. Can't help the weather. So the race director changed the start from the age group and 4-6 people at 15 second intervals to a two stage start, one for Olympic and one for Sprint. The course changed too, though not much of a problem for the sprint race.

I started at the back, I was too nervous (and of course inexperienced) to start near the front. I think this is where I made my first mistake as I ended up weaving around people trying to find a clear path and couldn't get into any rhythm until 300m out where I finally got on with it and settled down. My second mistake was after the halfway buoy, I went a little off course and swam across the feet of one of the olympic distance swimmers and got a kick in the face. It was my fault, but it didn't help my rhythm having to tread water to re-seat my goggles. I swam a little faster after that as I was annoyed at myself for making a silly mistake. As O go out of the water and onto the mats, my boy handed me my glasses so I could see where I was going and I jogged to T1.

T1 was quick though I had trouble getting my bike seat under the rack, I should have checked that before the race...Doh!

The bike was fun, I love hills - I'm an MTBer!  I don't think it suited some people as much as me so I did a lot of passing. The course was well marked with marshals in all the right places. I had a huge grin all the way around, this was the only leg that I wish I'd entered the Olympic! I made a point of hitting 40mph on the final downhill before T2 - that was a blast!

T2 was OK, I sort of forgot I was on the road bike and tried to brake like I was on my MTB with hydraulic disc brakes....needless to say I didn't slow down as much as I thought and skidded, staying upright though and I jumped off inches before the timing mat. Off with the helmet and on with the running shoes. Which way to go? I stood there for a second confused, but a marshal started waving and saying this way so off I went.

The run was interesting to say the least. It started with a steep downhill gravel track followed by a steep uphill rocky track followed by a 1/2 mile of a grass/dirt track which then turned into mud. Apparently this is an ATV trail and the day before they were still running quad bikes through it churning it up. I had a lady catch up with me and pass me, but just then she lost her shoe in the mud! I offered her a hand for stability and once she'd got her shoe out she insisted I go. By the halfway water station she had caught me and I ran with her until we were within a few hundred yards of the finish when I couldn't keep up with her anymore. Thanks for the encouragement Carrie! The last hill up to the finish was steep and it felt like running up a sand dune!

I'm really glad I chose this tri (luck not judgement) as it was small, friendly and although a lot of people didn't like the course, I loved it!

If I could do anything differently I would not make the swim and T1 mistakes and I'd have had a longer period to train.  The feeling of finishing was amazing and I plan on racing again, but not for a while. I love triathlon and have a great admiration for all triathletes. My idea of doing an Ironman before I'm 40 is now in perspective...though I think it would be too much sacrifice right now.

Training and racing was tough on me, but I think it's way tougher on the rest of my family than I'd ever imagined. Look after the ones who look after you. 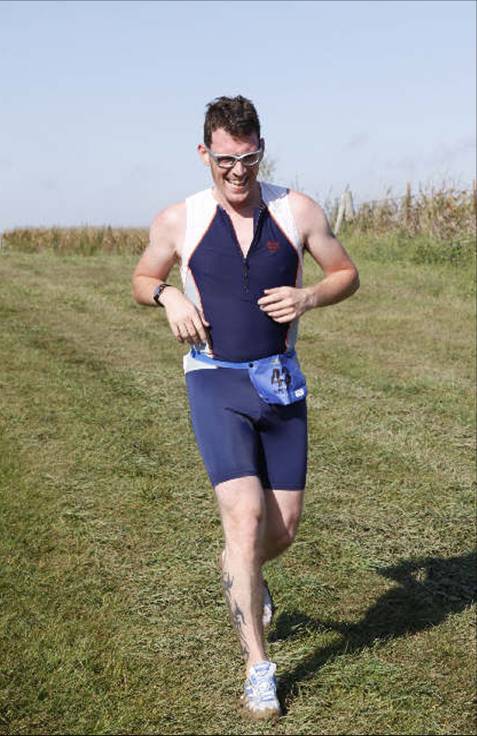