From overweight with heart problems to becoming a triathlete

I was terrible at sports in school and usually banned from games. I however did sport outside school. I started canoeing at 15 but at 25 my weight creeped up so that could not fit in the boat. At 25 I bought a house and renovated it, worked full time and studied at the university. Sport went bye bye and my weight went up. I started having high blood pressure and dizzy spells so I was taking medication and not doing any sports because of that. I was at one point over 17 stone. Gradually my weight came down though not intentionally - just subtle life style changes however I stayed at 16 stone 4lbs. I like to support people who have disabilities and one of them went to the gym I found out. I joined the gym.  I made sure I went down as I paid my money upfront each month.

I relearned to swim and did the Great North Swim - which was a mile swim in a lake in the north of England. I did it with the help of my swimming instructor and a lifeguard from the gym.  I was now 12 stone 6 lbs. I have been this weight for about three months. In eight months I lost 50lbs!

However, after I did this I needed a new goal as I put a stone of weight back on. My back got injured during this time so I got a physio on my back and decided to triathlon. I bought a bike and started running. I had not run since school and was so bad at it. I had not ridden a bike since I was 19 when I got my driving license. However, trying to fit cycling into my life was difficult. I mainly did it on the days off but not often as I should have. I run at a park which is a 5km timed run near where I live. Other than that I only ran in the races.

I then did an aquathlon (400m swim 2.5 km run) then a 800m swim then a 5km run. I followed that up by doing a mini triathlon which was a 200m swim, 10km bike (which was an uphill 5km) then a 2.5 km run (which had a steep hill in it). I did not get great results but I did it. For me it was crossing the finish-line. I soon joined the local triathlon club and swim trained there.

I seriously planned then to do a triathlon in Leeds in August, the year anniversary of my angiogram. I got the flu which left me weak for about a month. I was only fully fit for two weeks before I did the Great North Swim. I beat my last years time though. I saw a triathlon in Humberside about 60 miles from where I live. I did the cycle route in practice (I went the wrong way and did anextra 10km in error).  The race was a 400m swim (in a pool) a very hilly and bendy bike 18km course with a very steep hill followed by a 5km run (which was 2.5 km course run over a bridge and back).

The day itself I was nervous. The people were a good crowd and even helping me setup. This event happens every six months. Typical me doing my first race at the end of the season! I learned a lot that day. The swim went well though was it was strange swimming in a 33m pool. The transition I was a bit slow. The bike I was ok but happily plodding along while being overtaken by experienced cyclists. That peeved me. I was last of the novices to go. I think I need better tires and better planning. The bike is my weak spot. The 5km run went well for I am a slow runner.  I did the triathlon run in 33 mins  - not so bad. My race time was 1 hr 55 minutes.

I am glad I did it. I plan to run with the running club at my gym as well as park runs. I hope to cycle when I can and go to spin classes.  Swimming?  I hope to do that at the gym and tri club. I have lots of people giving me advice and support now which is fantastic.  I even have people to train with now. I am very thankful to those people who have helped me. I plan to race the Olympic distance next year - then perhaps Ironman someday? 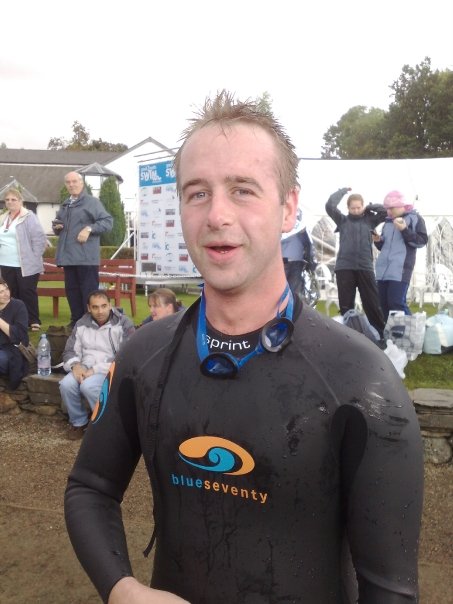