A Girl's First Try at a Tri

A 34 year old new runner gives a shot at her first triathlon in the chilly waters of the San Francisco Bay.

In an effort to continue my exercise-based weight loss program, I started running in August 2009 after a layoff. Needing to feel empowered, I took to running - an activity that I swore was only for the skinniest of people and therefore definitely not for me. Within weeks, the pain was decreasing and each run made me feel stronger and more able.

In September 2009, I attended my best friend’s first Olympic distance triathlon in Pacific Grove, California. Inspired by this I decided to increase my training and do my first 5k, with the hopes of doing a triathlon in due time. So I continued my 'running' with the support and companionship of my best friend. In the meantime, I bought a road bike and started an indoor cycling class with a cycling instructor who really tries to mimic real road training.

My first 5k came on November 15, 2009 with a not-too-shabby finishing time. I was not breaking records, but I was doing a 12-minute mile, which was fine for me. I did my second 5k a few weeks later and another one every 4-6 weeks. After the second one, I decided to up the anti and signed up for my first sprint triathlon to occur on February 28, 2010 in Redwood City, California - the Stanford Treeathlon.

Beginning January 1, 2010, I began following a training schedule inspired by Eric Harr’s book “Triathlon Training in Four Hours a Week.” Given the newness of running and the return to cycling (but being new to more competitive cycling), I upped the training and included more cycling and running. I tried to live by “the schedule” - feeling a sense of pride and accomplishment each time that I was able to check off another workout. When brick sessions began, I was humbled but persevered. Open water swims in the 50-54 degree waters of San Francisco’s Aquatic Park taught me valuable lessons about my need to wear earplugs to avoid balance problems after the swim, wetsuits, how to brace myself for the cold, and so on. Each time I was getting stronger.

Packet pick-up was the Friday before the event and nervously I claimed my bib. Standing amongst the graceful, slender bodies of 18-22 year old college triathletes, I felt heavy and seriously out of place. I grabbed my bag and only half heard instructions as I was excited but self-conscious. Saturday morning however, I woke up with a start - excited and energized, chomping at the bit to go for a light, 30 minute bike ride. That night, I set up my transition area to ensure that I had everything. I packed my bike, wetsuit and gear then went to bed. Amazingly, I slept well.

It's race day, 5:20 a.m. and the alarm is going off. Groan. I showered, ate some oatmeal and hit the road. With my best friend alongside we merrily made our way south to the event. We arrived on time and I immediately felt the butterflies. We pulled out our bikes and made our way into the transition area where I grabbed my spot amongst the racks, greeting the few others who had made it there already. Once setup, we went to get our chips and get marked. This was it. With so much awe, I watched the volunteer write “574” on my arms and then on my legs - I felt giddy. It was official - I was here and I was doing this.

After the briefing, we suited up and started the long (1/4 mile) walk to the swim start. The swim was a deep water start requiring all participants to swim about 100 meters out into the middle of the harbor. No sweat. Soon the first wave was off and my confusion as to the swim course was quickly cleared. After about 20 minutes, I finished donning my wetsuit, earplugs and swim cap and was standing on the mat with all the other under-40 women, again with my best friend beside me. Down the ramp and into the chilly waters of the bay we went. Splashing some water onto my face, I began doing breast stroke to allow my body to fully acclimate before doing crawl. Unfortunately, the “breather” provided to all other waves was not given to our wave, and before I reached the start, they had started our wave off (and trust me, I was not in the tail end of the group of swimmers). Frantically, we all pushed ourselves through the start line and onto the course. Having pushed at the outset, I was out of breath within minutes of starting the swim. So I floated for a minute, allowing myself to catch my breath while waiting for my best friend. Soon I was swimming again and quickly found my rhythm in the water. As I rounded through the first turn, I could see the swim finish and hear the cheering. I felt awesome.

Out of the water, I walked-ran the length to the transition area and, in what seemed like no time, was ready for the bike ride. Having made a prior plan to wait for my best friend, I waited. When she arrived at her bike, we decided I would go ahead as she is a much faster cyclist. I grabbed my bike and ran out of the transition area, mounting as I wished for another good ride. 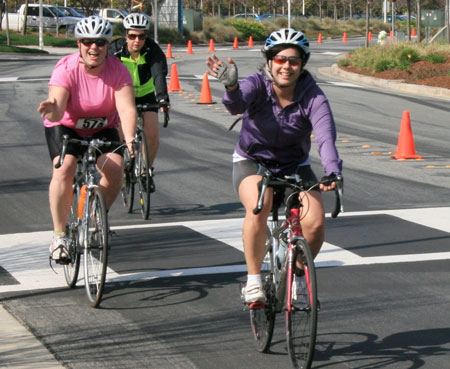 The bike portion was three loops on a flat course around the local area. Scenery-wise it was lacking, but it gave me ample opportunity to check out all the outfits of the cyclists who gracefully passed me by. Soon the course was emptying as I realized more and more people were onto the run. Not bothered, I savored the moment - ecstatic that I was doing my first tri only six months after having taken up jogging, and soon - I was done with my three laps.

Heading into the transition area, I reached the dismount area. As soon as my first foot made contact with the ground, my leg forgot the feeling of solid ground and quickly gave out. Whoops! Down I went, without grace, but - somehow - I was able to brace myself and I didn’t get injured. Quickly I racked my bike, grabbed some water and GU and took off, my best friend just behind me.

Into the run I felt so sluggish. I suppose it was in part to the fact that, according to my best friend, I blasted out of the transition. What can I say? I was AMPED! Unfortunately the energy was not sustainable for more than 1/2 a mile and we resorted to a run-walk approach for the remainder of the 5k. We finished though and, in the end, we crossed the finish line with much happiness and joy.

I am a triathlete. Awesome. 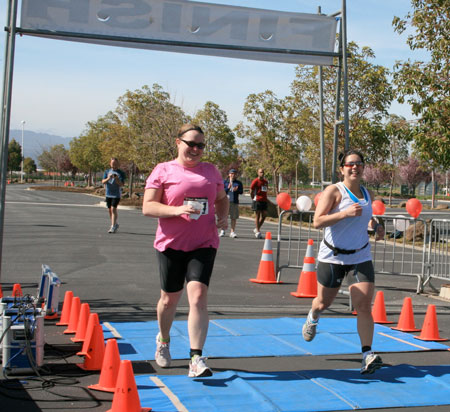