End Of One Long Journey, Beginning Of Another

There is such a feeling of power and confidence when you take control of your destiny! A year ago, I was a fat slob with no athletic inclination. I made this happen!

On the Thursday before my race, I was stricken with a stomach virus which had me screaming at the toilet every half-hour for about 18 hours. Luckily, the worst of it had passed by Saturday morning. I was a might dehydrated, burpy and gassy and still not feeling 100% but there was no way that I was missing this race! Not after all the hard work I had put into it for the past five months.

Because this race started in the afternoon, I had the luxury of sleeping in until 8am, eating a full breakfast of two waffles and a glass of juice and taking a long hot shower before heading down to the course for packet pickup at 10am. After having my body marked (age group and race distance on the right calf, race number on the right hand and left shoulder), I was one of the first guys in when transition opened so I was able to secure a pretty good spot right by the exit. By the time I had my gear setup just the way I wanted it was only 11:15am. With over four hours to go I ate a PB&J that I brought with me and spent the time looking at the other triathlete’s gear (some of which made my stuff look like I got it at Toys ‘R’ Us!) and talking to the other competitors.

Everybody was extremely talkative and nice. I was all wired-up with nervous pre-race energy, and was glad to see that everyone else was to. There was a good mix of veterans, rookies and first timers. One girl told me that she had only learned to swim three days ago! I still wonder what happened to her. At 1:00pm I was able to watch the long course swim start. Having never done an open water swim, I was really curious to see this. What I saw was not encouraging. About 20 seconds into the swim, a couple of the long course athletes looked disoriented, panicked, cold and confused. Some of them slowly started to swim again, doing the back stroke or breast stroke, but the others started making their way back to the dock for a DNF. Yikes, what the hell was going to happen to me out there? I thought I was pretty confident in my swimming ability. I hope I don’t get this panic attack! 3:00pm finally rolled around and I lubed up and got my wetsuit on. With 10 minutes to go, I jumped into the water so I could acclimatize to the cold and mentally prepare myself for what was coming. The water was cold, but not as cold as training in my mom’s pool this winter!

I had my ear plugs in to help with the vertigo and nausea that I seem to get from cold water swims. I tried to make my way over to the buoy and the front of the group. I wanted to keep as close to the buoy line as possible and ahead of the pack to avoid the flailing arms and legs. Unfortunately, so did everyone else. As I told myself at the beginning of the Epic Gran Fondo in San Diego, “this is going to be interesting”. 30 seconds to go! My heart rate started to climb involuntarily. HERE WE GO BABY! 5...4...3...2...1... 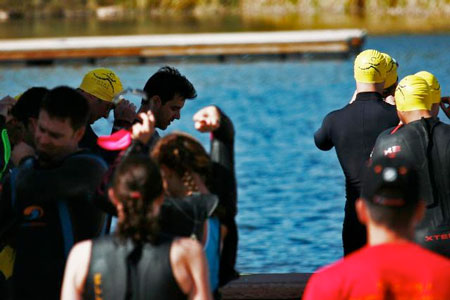 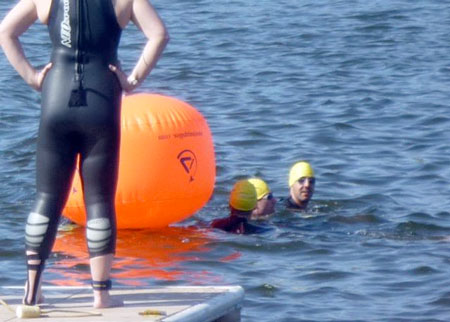 The starting horn blasted and we were off! Lots of things were going through my mind at this point. The first thing I felt was relief. I’m not going to have a panic meltdown! Good, that’s out of the way. Now I can focus on the swim. This really is nothing at all like swimming in a pool. I can’t see a darn thing at all! Almost immediately, my goggles had completely fogged up and the buoys were situated pretty far apart so sighting was difficult. For much of the first half of the swim, I was relying on the few yellow swim caps in front of me for direction. We had a strong wind blowing towards us and slightly to the right. This made the water rather choppy and there was a bit of a side current forcing me to constantly make course corrections.

Once I nearly missed a guy traveling almost perpendicular to me. One of us was completely disoriented. I hoped it was him! I also noticed that I was pushing way too hard. My adrenaline was really coursing through me and my hart rate was sky-high. It took some serious effort to dial it back and get into a manageable rhythm. Finally I hit the turn-around buoy and started to make my way back. New problem: THE SUN! The late nature of this race had put the setting sun right in my eyeballs as I swam back to the dock. Next time I am getting some super dark tint on my goggles! My only hope was that the sun was setting right behind the swim exit so I could use it as my “big buoy.” It worked! I finished in 24 minutes! Out of 70 guys, I was around the 10th guy out of the water. Not bad considering all the difficulty and the fact that it was my first open water swim. I’ll take it! 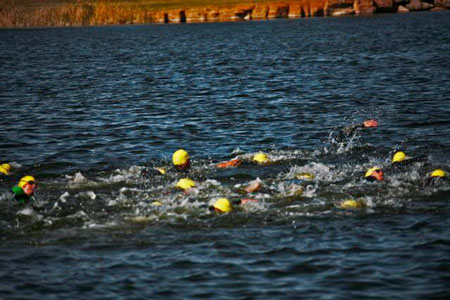 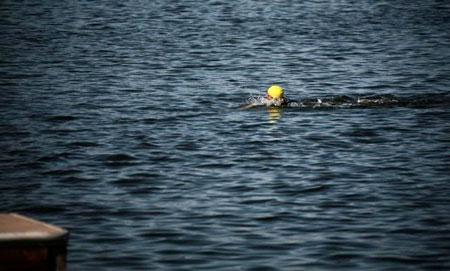 The earplugs worked! No dizziness or nausea upon standing up out of the water. I highly recommend them! Once on the dock, I shuffled over to a pair of flip-flops that I left there so I could protect my feet on the dirt floor of the transition area. While jogging over to T1, I began to unzip my wetsuit and pull off the upper half. One good idea here is to hold onto your swim cap and goggles as you pull your arm out of the suit and leave them in the inside-out portion of the sleeve. It’s one less thing to worry about when you get to the bike. Once I got to my bike, I had a little difficulty getting the wetsuit off my ankles as I was still feeling a little awkward from the swim. Once the wetsuit was off, I draped it over the bike rack and the rest went very quickly. Opting to skip socks, I slid my heavily body-glided shoes on, threw on my helmet and shades, and grabbed my bike. Off we go! Total time in transition: two and a half minutes. 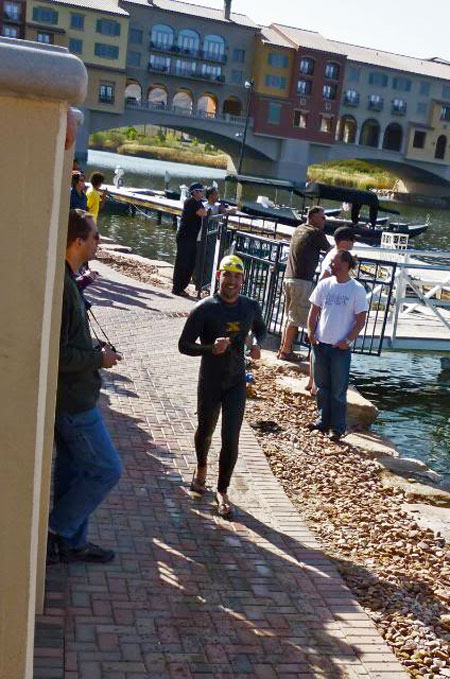 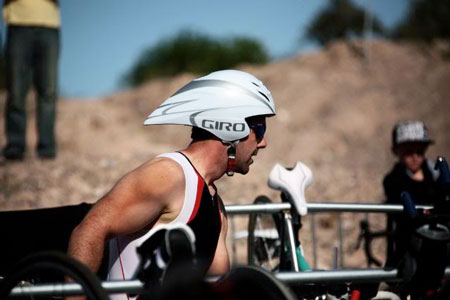 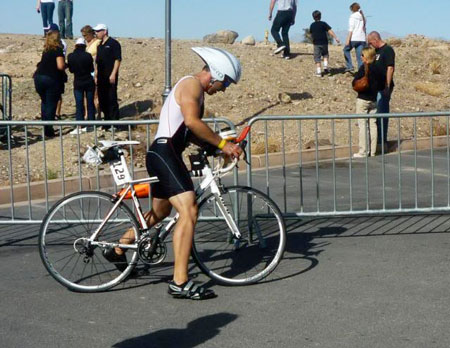 The first thing that hits you out of transition is a grizzly hill going behind the Monte Lago Casino leading to the main road. I jumped out of the saddle and cranked my way out. Having trained on this course many times, I was feeling very comfortable compared to the dark swirling confusion that was the swim. My bike and I felt like old friends. With a smile on my face, humming the song “Don’t stop me now” by Queen, I quickly started to reel in some of the other bikers. The main difficulty with this leg of the race was the wind. The long downhill leading to Lake Mead is where I can usually clock speeds of up to 50mph. Not today. The wind from the north was a steady 15mph with some pretty nasty gusts. The only consolation is that the wind affected everyone. I tried to eek out an advantage by pushing extra hard down the descents when I noticed that others were cruising or coasting. I quickly passed another handful of riders.

Downing a GU at the turnaround at the fish hatchery, I was happy to finally feel the wind at my back and started the big climb out of the Lake Mead area back to Lake Las Vegas. Total bike time: 1 hour and 20 min, about 12 minutes slower than my training pace. I’ll chalk that off to the wind and fatigue from the swim. 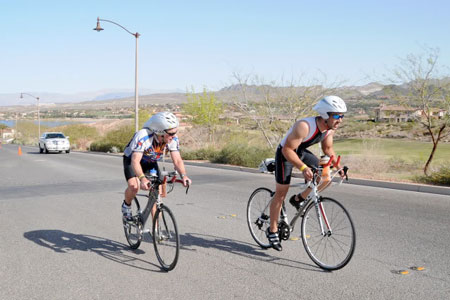 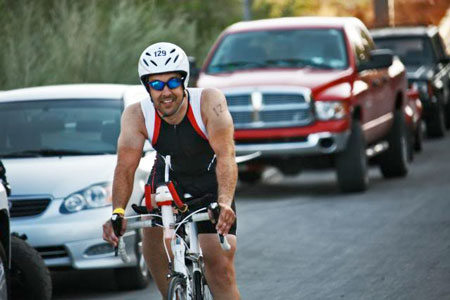 Transition 2 – bike to run:
This I can barely remember because it went by in a blur! I slid my shoes on (again, no socks), grabbed my race number belt, and switched my helmet for a hat and I was out of there! Total T2 time: Less than a minute.

Having done a few brick training sessions, I thought I was ready for the feeling of dead legs that you get when switching from a non-impact motion to a high-impact motion. My wife said I looked like a new-born giraffe coming out of T2! I felt like an ancient giraffe on its death bed! I now realized that I had made a mistake on the bike. I pushed too hard and now I was paying the price. My plan to run a 8:30 minute/mile just got flushed down the toilet. Plan B – let’s just finish this thing! Fortunately, like the bike course, I had trained on the run course before as well. Unfortunately, I knew all too well the two massive hills that I was going to have to climb to get to the finish line. Time to buckle down and do the best that I can! Let me tell you: the hills sucked! All of the people whom I had confidently passed on the swim and the bike were now getting their revenge on me. Oh well, in the end, this sport is not about the other people – it was me against me! The only problem was that I wasn’t sure which one of us was going to win...and then it was there: 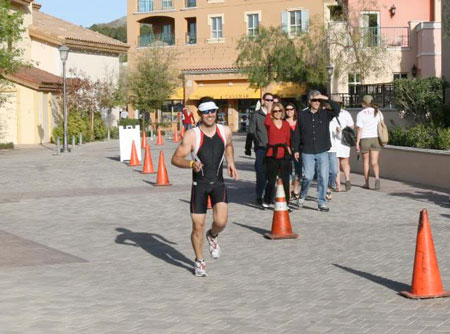 The Finish:
I had fantasized about this moment for the past five months. The vision of coming through the finish shoot, with my friends and family cheering me on was always what kept me motivated even in the toughest training sessions. I can safely say that my fantasy paled in comparison to reality! The second I saw the home stretch leading into the finish line with my friends, my family, my wife and especially my son, jumping up and down; a huge smile on his face and a big red cowbell clanking away in his hand, all pain and fatigue were washed away! I flew across the finish line. Endorphins flooded my body and I felt like I was floating. What a feeling! I wish I could have bottled it up! It’s like diving into a swimming pool filled with every good feeling you’ve ever had! Just awesome!

There is such a feeling of power and confidence when you take control of your destiny! A year ago, I was a fat slob with no athletic inclination. I made this happen! I decided that this was something I was going to do and I did it! ME, and no one else! I changed the direction my life was going and forged a new path!

All I can say is I can’t wait to do it again!

More importantly, I finished on the podium for my AG!!! 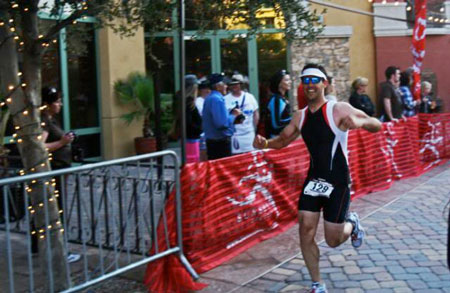 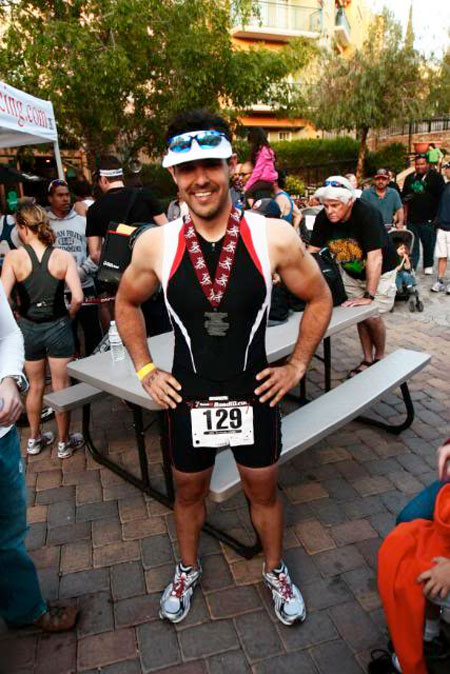 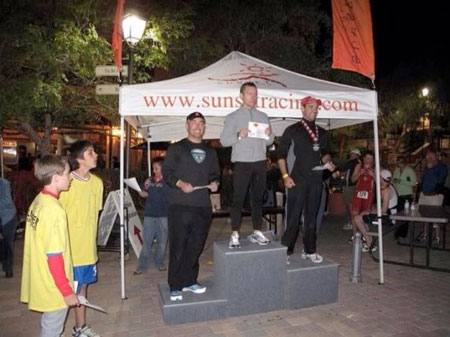