Yaw & Airflow: Where Does the Air Go?

In this article, we are going to explore air movements over and around the front end of a bike and rider. We will examine how air affects these frontal areas.

Air movement over most anything is interesting and complicated. For bicycle riders, how to best get THROUGH air represents the single biggest challenge to going faster. Air can actually be considered a fluid, which can help conceptualize its behavior. Air is compressible, difficult to see and unpredictable in its “reactions” in certain situations.

All of these things add up to make it a formidable challenge when one sets out to design a new bicycle frame or component. Simply flattened or swoopy shapes do not guarantee a low aerodynamic drag result!

In this article, we are going to explore air movements over and around the front end of a bike and rider. We will examine how air affects these frontal areas which, in worst case scenarios, require you – the rider – to waste more power/energy to get down the road. I went to the Texas A&M wind tunnel and set up a series of tests for our purposes here.

In the first example, below, I took photos using “smoke” to help visualize airflow. The Texas A&M wind tunnel is used extensively by NASA, Harley Davidson, Indy Car teams, Navastar International and many other organizations because of the accuracy, high wind speeds and high rate of table/rider rotation if offers. In other words, not only was I able to control the speed but also the direction (relative to the object/rider) at all times while generating and recording precise data.

When testing objects for aerodynamics, it is essential to rotate the object in the simulated wind in order to measure the effects of crosswind airflow. Even for race cars traveling at almost 200 mph, crosswinds affect the performance of a vehicle. For cyclists, crosswinds are the ever present enemy, making the bike feel unstable, especially in gusty conditions. Savvy competitors soon learn to ride off to one side of the rider in front of them in “echelon” formation in order to benefit from the diagonal slipstream.

Conducting aerodynamic testing at a zero yaw angle, representing a perfect headwind, never tells enough of the story. It is important to test at multiple angles so that you have a better idea of how airflow will behave on most courses and it most scenarios – i.e. where all that air goes. Only then can you begin to work on the creation of wind-friendly equipment shapes and rider positions. 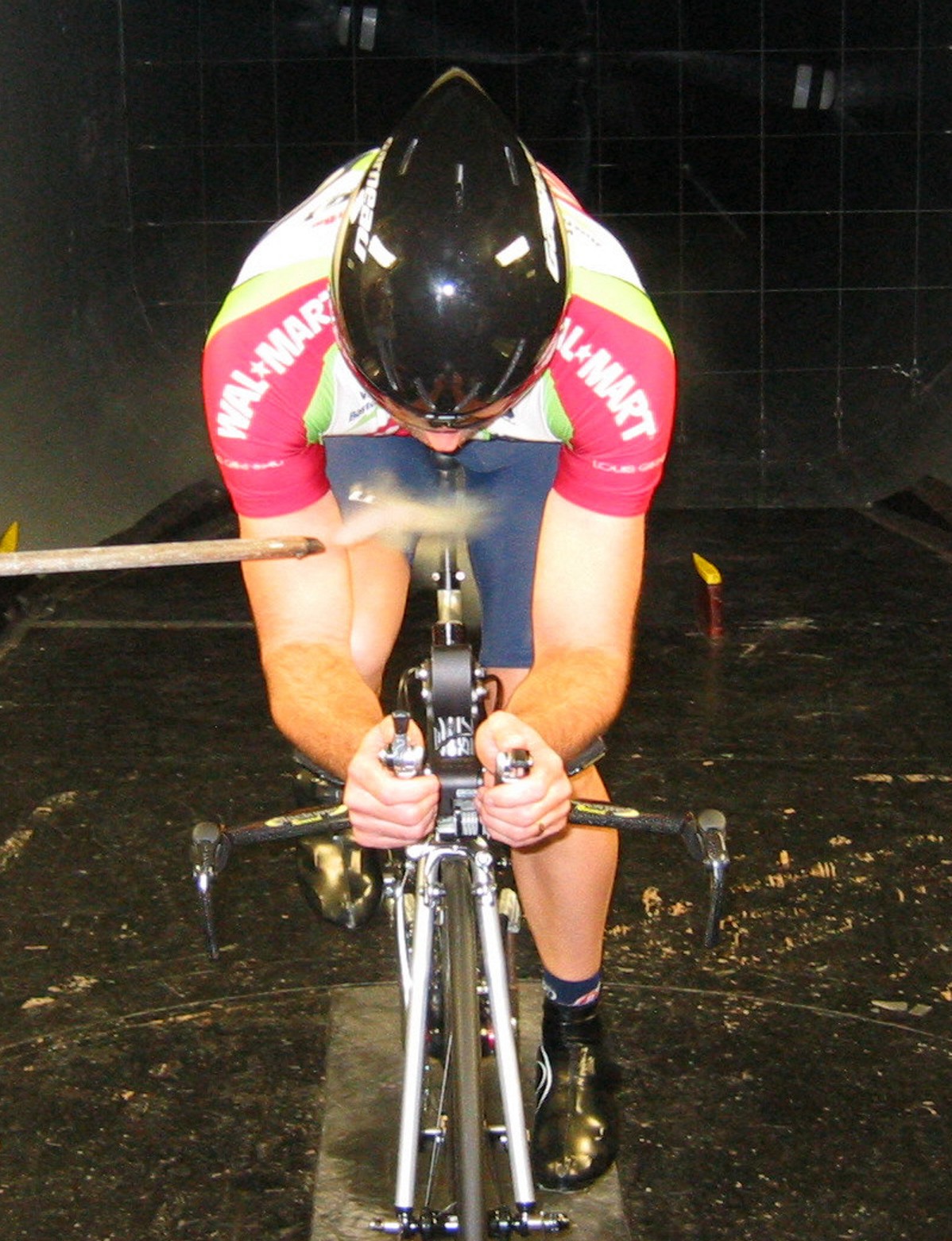 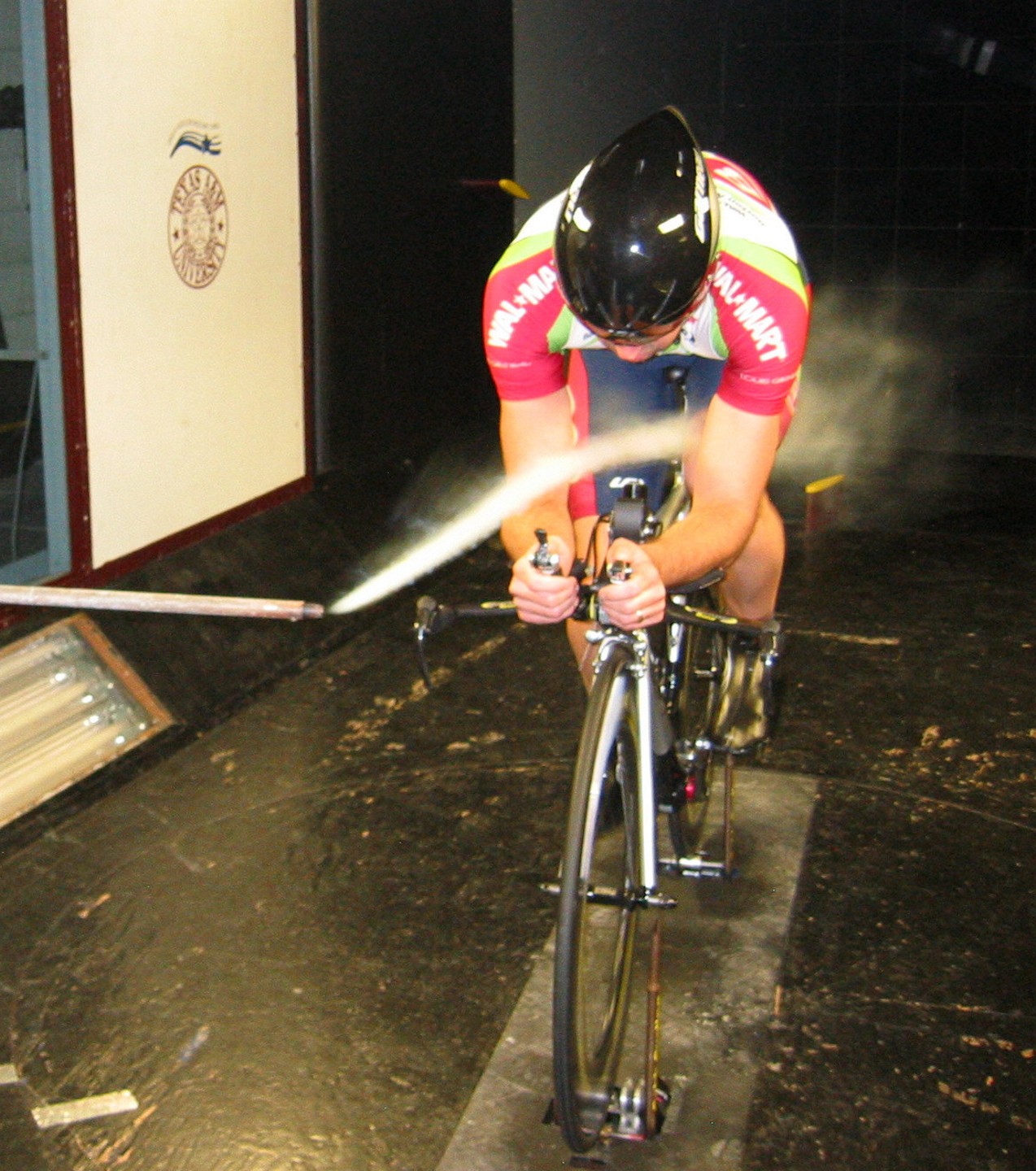 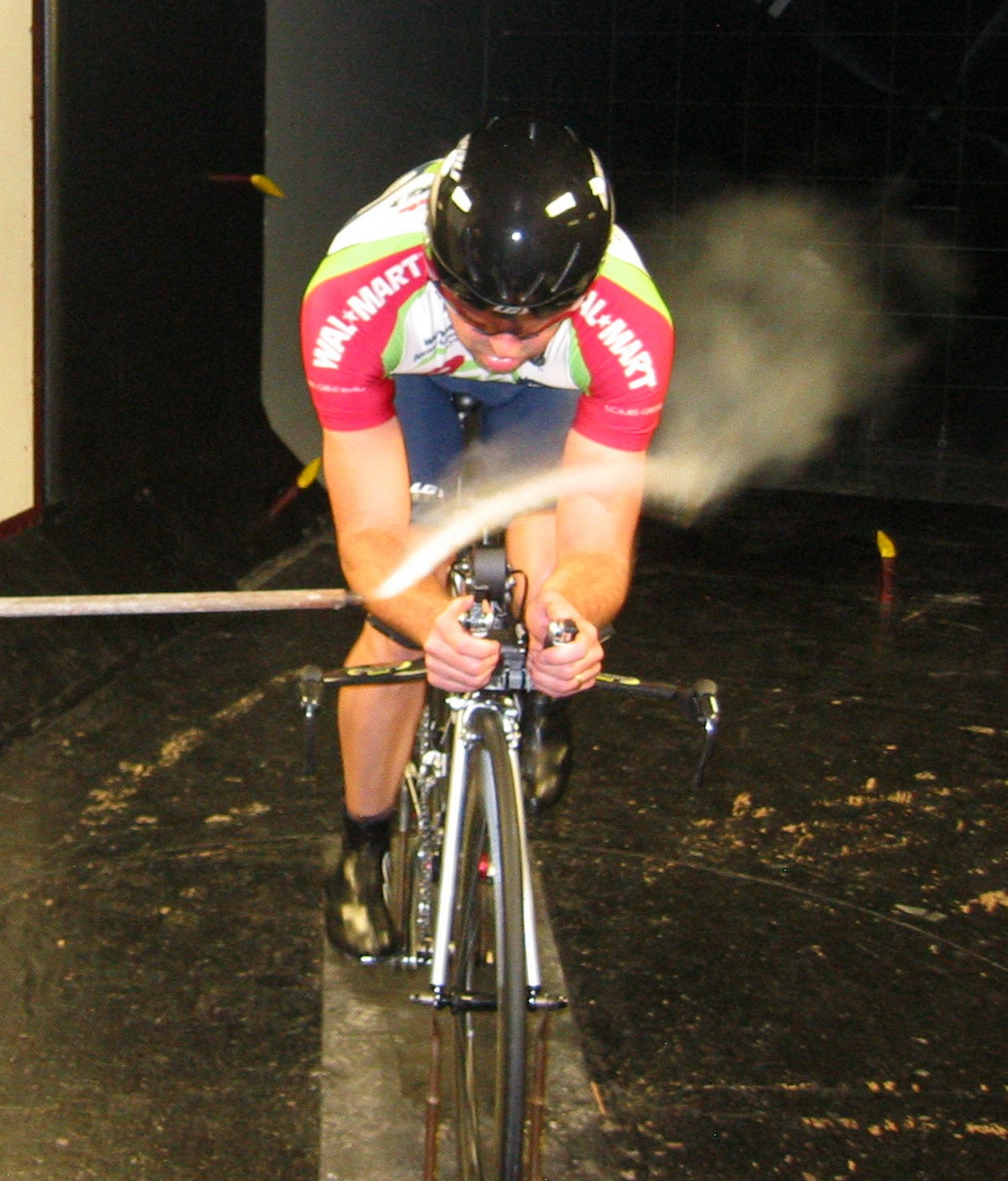 The above series of photos illustrates how air changes direction over the rider’s arms as effective wind direction changes from zero to five to ten degrees of crosswind or, in overly simplified conceptual terms, “yaw”. During this test, the rider was pedaling because naturally leg movement affects air turbulence and flow.

The first picture depicts a direct headwind, or zero yaw, with air flowing neatly into the chest area and around the rider’s hips. Things begin to change quickly as we turn the rider to simulate a crosswind.

The second picture illustrates five degrees of yaw. The air has already begun to track more directly off of the low side or drafting hip area. You can see how the air becomes turbulent – read: disorganized – as it flows over the riders left hip. This makes the rider “appear larger” to the wind, requiring him to generate more power to maintain the same speed.

In the third picture on the far-right, the rider is turned to a ten-degree yaw, or crosswind angle. A ten-degree crosswind is very common, a situation that will feel familiar to those of you who have spent much time on your TT/aero bikes. At ten degrees, things get interesting: air behaves and flows quite differently than it did at smaller angles. It adds a significant amount of frontal area to the rider’s aerodynamic profile, requiring even more power to maintain a given speed. Air jumps from the right arm, across the open chest area and exits around the outside of the left arm. The air “exiting” the rider becomes much more disrupted, which drags additional air from the upper back into its vortex.

I’ve included the two pictures below to help illustrate how air that passes around a helmet can be pulled down toward the airflow coming off of the rider’s upper arm. The difference in these two pictures is simply that in the left picture the rider has his helmet in a face-down or tail-up position, and in the picture to the right the rider has his head face-up (helmet tail-down). Both of these pictures feature the ride at the ten-degree crosswind angle. 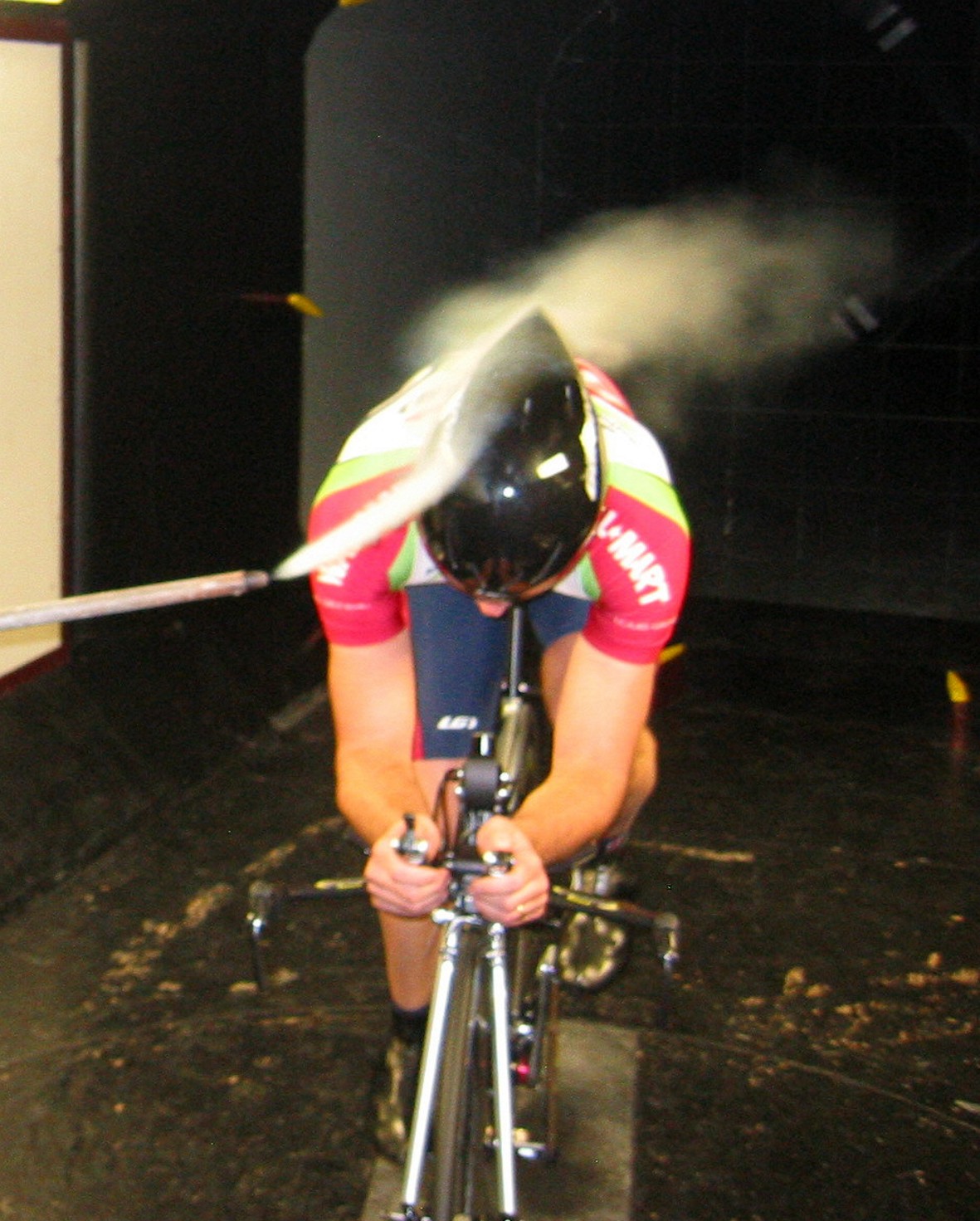 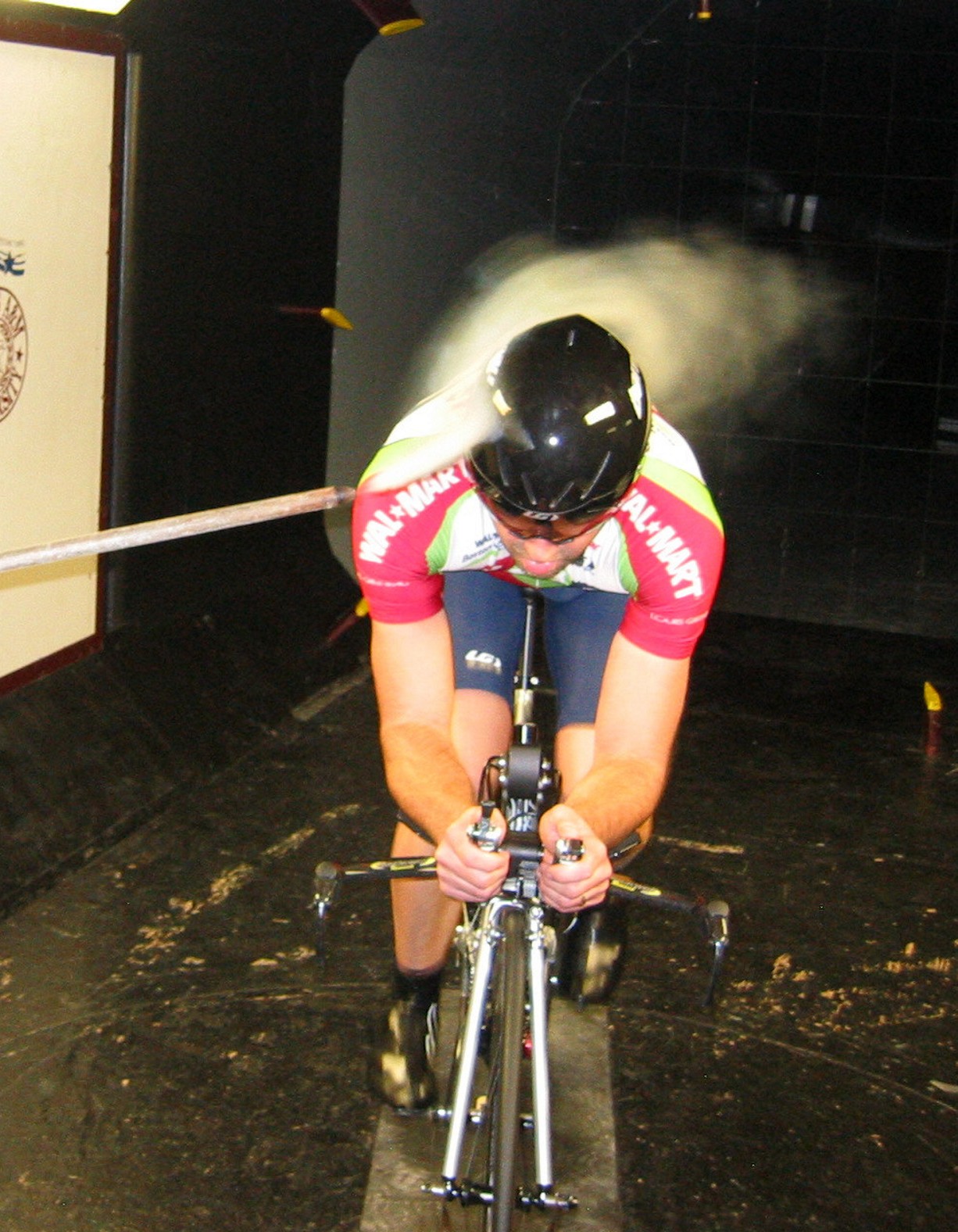 Some will see the picture on the left and immediately claim that with the rider’s head down and helmet tail up they are creating more drag. But there’s more to it than that. In the picture to the left with the rider’s face down, the entire helmet is lower, helping to mask more of his upper body. This results in a lower frontal area which requires less power to maintain speed. This is one of the reasons why it is very common for aero helmets to test faster with the tail up. In the picture to the right, the air coming off of the rider is smoother and better organized but there is a noticeable gain in frontal area (imagine how different each silhouette would be).

By looking at either of these two pictures, and by considering them in conjunction with the third picture (far-right) in the initial series of three pictures further up, where airflow jumps around the riders upper arm, you can begin to see how airflow for cyclists always consists of a complex set of variables. Airflow off of a helmet begins to flow down and join the air coming off of a rider’s upper arm.

Since our use of images seems to reinforce the concept that a picture is worth a thousand words, let’s consider another set of photos, below, demonstrating how air behaves further back. This is a different rider, but he is positioned at the same ten-degree yaw to help you visualize how the air moves over a broader area of an aero-positioned cyclist. 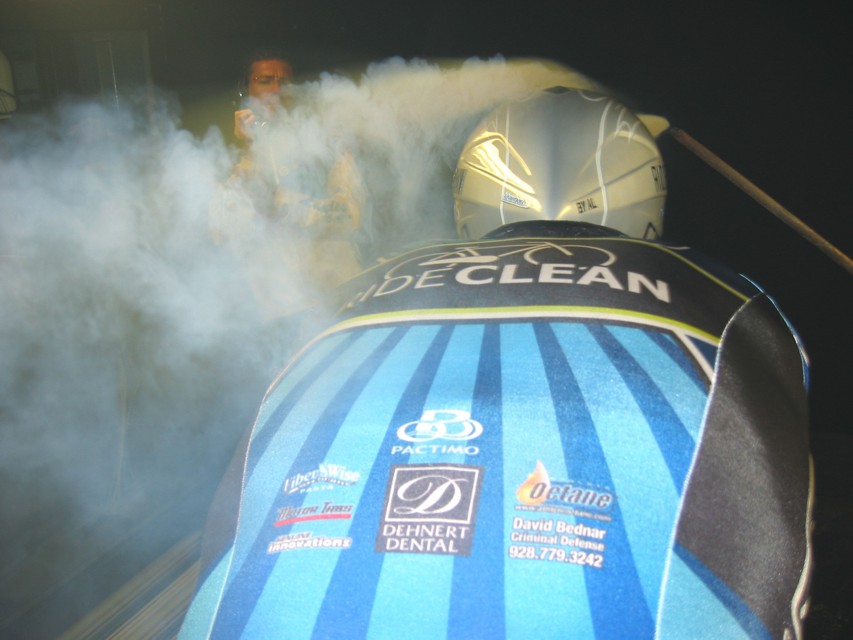 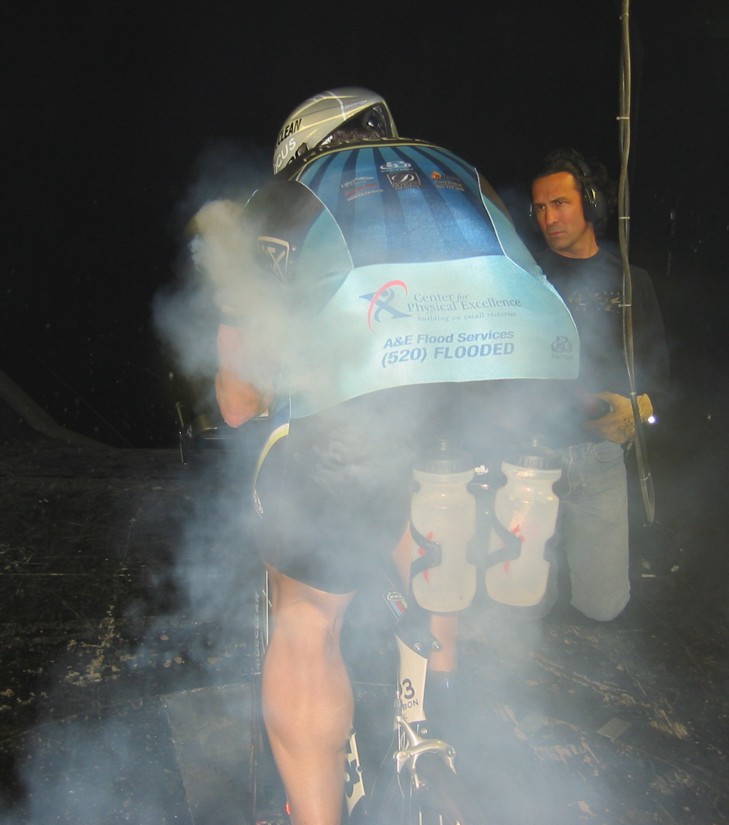 The picture on the left illustrates a ten-degree crosswind flowing off a helmet. The picture to the right shows airflow off the rider’s upper arm. It should be fairly easy to imagine how these airstreams run together. It should also be easy to discern that riding in this racer’s draft should be done just to his left. [Just be careful not to overlap wheels unless you know and trust the rider in front of you and he realizes you’re there, or he could “come across” your front wheel, potentially resulting in a common type of crash.]

Finally, I felt the picture below would be a good shot to help you see how air flows over hands and through the chest area in a straight-on headwind. When the air enters the hand area and flows through the chest, it has to go somewhere and generally goes around the outside of the hips. This is another reason that wearing baggy shorts and loose jerseys will make your workload unnecessarily harder. 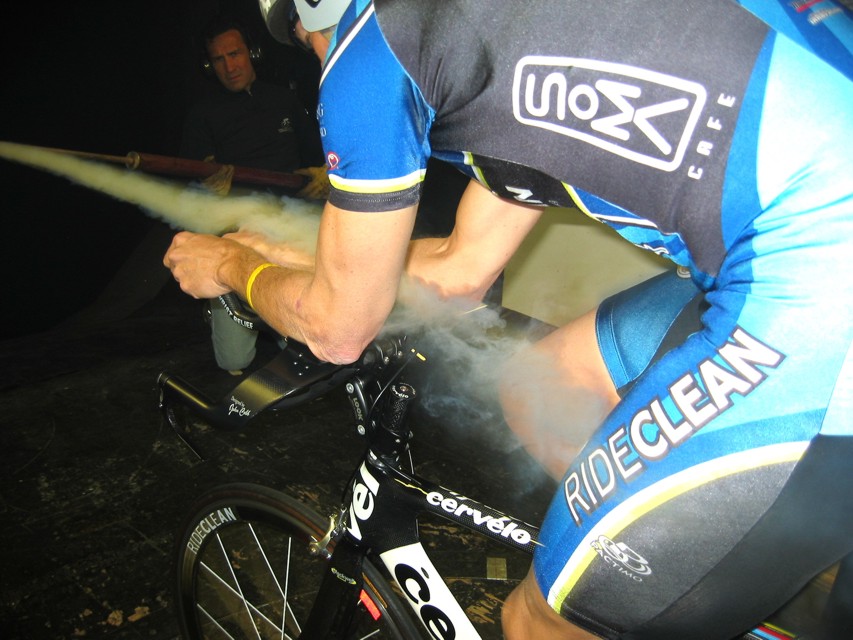 Hopefully these illustrations will help you better understand various airflow and how it affects your aerodynamics, power output and – ultimately – your performance. Simple things like clothing-choice will make your riding and racing more fun as well as more rewarding. Also, being aware of how air is flowing off of the rider just ahead of you can help you reduce your effort measurably, saving you precious energy.

John Cobb has been actively involved in the cycling industry since 1972. He first proved himself as a pioneer in the area of cycling aerodynamics when his positioning and aero knowledge were used with Greg LeMond, thus shocking the traditional European bicycle racing world. John developed a system, early on, for positioning riders in order to gain more speed and comfort. This has led riders from around the globe to search John out for cycling help.

John Cobb has been actively involved in the cycling industry since 1972. He first proved himself as a pioneer in the area of cycling aerodynamics when his positioning and aero knowledge were used with Greg LeMond, thus shocking the traditional European bicycle racing world. John developed a system, early on, for positioning riders in order to gain more speed and comfort. This has led riders from around the globe to search John out for cycling help.