I was only halfway to my weightloss goal, but I was still able to finish my first triathlon only after 10 weeks of consistent training.

A little over five months ago (just before Christmas '09) I decided it was time for a change in my health. I was an athlete all through college (soccer and basketball), but after college I didn't really keep up with working out. As I result, I had gotten all the way to 262 pounds. I enlisted the help of a good friend who had lost a lot of weight himself several years ago and now competes in races and triathlons regularly. He put me on a lifestyle change with both my eating habits and working out.

I was making some good progress with my weight and had completely changed the way I ate, when my friend asked me if I would be interested in running a triathlon. Without really thinking about what that would mean, I said yes - only to find out that the race was 10 weeks away! So, I started training. I wasn't perfect, but I stayed pretty consistent to the plan we had put together. I learned how to swim, bought a cheap bike from Target, and learned how to run properly.

As the race grew closer I got more and more nervous, but I was determined and knew that if I kept up with the training, I would at least finish. Then about two weeks before the race, my friend who was supposed to race with me, let me know that he had an emergency come up and was going to be out of town on race weekend. Boy was I disappointed, but I had worked too hard to back out at that point. The upside was that he decided to let me use his bike for the race. This was awesome, except that by the time we decided on that, race day was three days away. Somehow I was able to get comfortable clipping in and out (which I had never done before) while also riding a much faster bike.

Race day finally came. I had lost 30 pounds by this point and was feeling a lot better about myself, even though I was only halfway to my initial weight loss goal. My wife and I got a babysitter for our daughter and off we went. We got there two hours early, expecting long lines at the check-in point to the fort, but I guess we beat the rush as there was only one other car. This meant I had tons of time to get set up in the transition area, meet people and get more nervous.

I stretched and did some light jogging to warm up. Finally they called us all into the gym and gave the pre-race instructions. Since this was a pool swim, they then lined us up according to our numbers and I stood there in line waiting to get started. It seemed like it took forever, but it was only about 15 minutes until I got up to the pool. The whole time while I stood there I kept thinking, "I can't believe I'm about to attempt this!" Finally, I was standing at the pool's edge and the helper said 'go'. I dived in and started to swim. The swim was going well, but I realized after the first two laps that I was going faster than usual. This caught up to me in the final two laps as I slowed drastically and even got passed by the woman behind me. I did finish ok though and off I headed out of the gym and into the transition area.

Things went smooth in T1, just slow. I had planned on taking longer in T1 to try and catch my breath as much as possible. I walked my bike to the start line, hopped on, clipped in and off I went. After about a half mile, I hit the first big hill. This was a tough one, but I finally made it to the top. I cruised right down the hill and through the streets to the turn around. I was doing great until I hit the big hill on the way back. This is a rough hill. It is 9 miles into the 14 mile course and lasts about one and one half to two miles. I was pushing as hard as I could up the hill, but I was going so slow that I decided it would be easier and probably faster to walk the bike for a while. After a short time, I hopped back on, still on the hill, and biked for a while longer but had to get off a second time and walk the rest of the way. The rest of the ride went great, but I had lost a ton of time on that stupid hill.

I biked back to the transition area, hopped off the biked and walked back to my area. This transition went even better. It was still slow, but it felt fast to me. I was off to the run. The run went easier than I expected. I was able to get into my pace pretty quickly. I just kept telling myself that I was strong and just had to keep pushing so I could call myself a TRIATHLETE!! With about a quarter mile left there were three or four girls around 10 years old cheering each racer on. They were shouting, "We believe in you, believe in yourself. You are strong, you can do it!" It put a huge smile on my face. I pushed even harder and then the last turn and I could see the finish line. It was then that I could hear my wife cheering me on to the finish. All I could at this point was just smile as I crossed the finish line. I knew that I could then call myself a triathlete. Even though I'm only a little over halfway to my weightloss goal, I finished my first ever triathlon. This has now inspired me to continue working on losing the weight, and I already have my sights on another one for later on this summer. Hopefully by that point I'll be even lighter and be able to go even faster. What a great experience!! 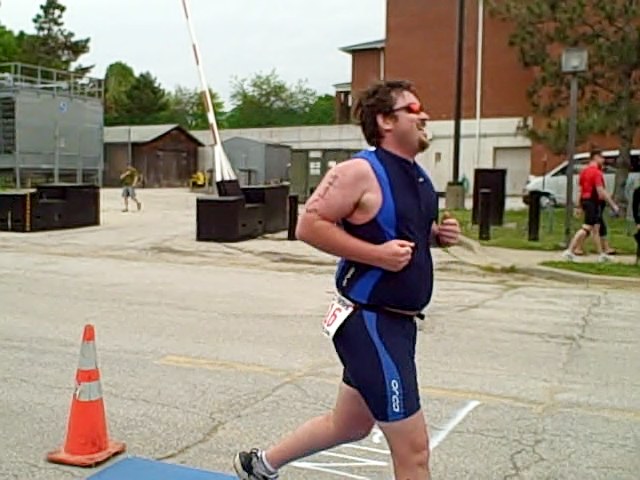