First "Outdoor" Tri Easier and Harder Than I Thought

Ups and downs race report from the Lakes to Pines Sprint Triathlon by a master's aged newbie.

Gasping for air, I staggered to the transition area where I wavered between passing out and throwing up.  Prior to the race, I had decided because I put all of that time into swimming, it would be my best event.

Here's what happened:  The event has the bike and run outside, but the swim is in the high school pool. Smart idea for May 15 in Minnesota.  I spoke to other athletes in my swim wave and paired up with someone else who was planning to come in at around 10 minutes for the 500 yard swim.  A third guy (with unknown speed) popped into the lane at the last minute, so now we needed to circle swim.

I led the circle for about 300 yards when the mystery guy signaled to pass.  Good thing, too, because I was swimming faster than normal to keep ahead of him and was running out of gas.  We all ended up out of the water shortly following each other.  I was surprised to learn later that I came in at 9:20, which is faster than I've ever swam the 500. (This might explain my condition going into transition.)

Once on the bike, I took off slowly.  Fortunately, there were lots of volunteers to point befuddled athletes like me in the right direction.  I eventually picked up the pace and passed about four people and was passed by about four others.  It's a double-loop bike race of 14.7 miles, with five waves coming from the swim, so passing is an unclear mini-victory.  I started feeling more confident on the second loop, but held a steady pace to avoid a repeat of the swim experience.  Due to the ideal conditions and lovely flat course, I rode about 18 miles an hour.  That's also a slight personal record.

If there's a lack of drama in the bike story, it's because the drama was all pre-race.  I'm a new owner of a road bike, having ridden a cyclo-cross bike for years.  I didn't even know what a presta valve was.  Turns out they work a little differently.  I got my bike in March and have inflated the tires several times without a hitch.  Pre-race, I noticed people inflating their tires, so I figured I shouldn't be lazy and I decided to check mine.  Bad idea. All I did was deflate them and couldn't get the pump to re-inflate them.  Fortunately, after about 30 minutes of jiggering with the pump, the tires were 120 psi again. It pays to show up early.

The bike-to-run transition went much smoother.  I got my Gatorade and was off.  Sort of.  More like I was dragging rubber legs.  The good news is that I had company.  I joined a couple of fellow over-the-hill rubber-legged guys.  I plodded on, and at about the last mile I worked up enough energy to use some decent running form.  I was surprised that my 5K time was pretty acceptable, especially since I didn't feel I was going very fast at all.

The Lakes to Pines Triathlon ends with a victory lap around the high school track, and there I received my medal, water, orange slice and banana chunk.  I finished injury-free, only to bruise my heel crossing the Mississippi Headwaters later in the day.

The weather was amazingly warm for the time of year and the people in Park Rapids are astoundingly nice.  If you are looking for a first race, it's a fabulous choice.

My daughter was fascinated with the body markings, so she took this picture: 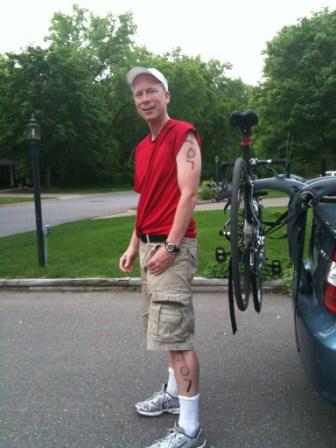