Training was harder than I ever imagined it would be. I've always considered myself athletic, but never really had a need to push myself beyond my comfort zone. This was so different and so rewarding!

In January of this year my good friend and yoga instructor had me over for dinner. Her husband, Bryant, is an avid triathlete. In an effort to get his wife involved, he suggested that Elizabeth and I train for a triathlon coming up in Nanjing. At first thought, it seemed an impossible task.

A week later, after doing some research and finding a good training plan on BeginnerTriathlete.com, I decided to jump in and do it although Bryant never could convince his wife Elizabeth to train with me. I chose the 'Couch to Olympic' plan, not realizing that my triathlon was really a Sprint.

Living in Shanghai, China can present some difficulties when it comes to training. My biggest obstacle was finding a pool where I could train. I started out using my friend's pass to her indoor pool, but I could only go when she was home. Finally after much searching I found a place to join that would cost an arm and a leg! The other problem with training in Shanghai is the pollution. I decided at the very beginning that I would do as much of my training outdoors as possible. Shanghai has terrible pollution, from exhaust from factories and cars right on down to the stench of neighborhood garbage dumps and the sewage canals that they call rivers.

After overcoming the challenges of outdoor training, I settled into a really nice groove. Training was harder than I ever imagined it would be. I've always considered myself athletic, but never really had a need to push myself beyond my comfort zone. This was so different and so rewarding!

Nanjing is three hours from Shanghai, so we chartered a bus with 30 of our closest friends - rather 30 other crazy people dedicated to traveling to a triathlon. I felt very overwhelmed and intimidated by the very athletic looking people that boarded the bus with me.

The following morning we met in the hotel lobby at 5:20 am and cycled out to the venue. Walking to the lake where we were to do our swim, we found a great sign: 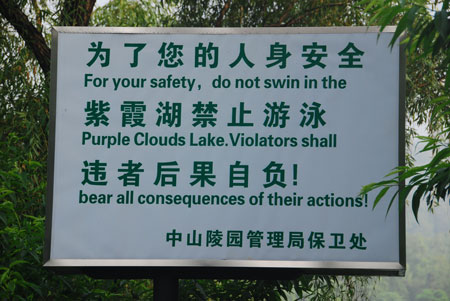 This event was organized by volunteers and was a non sponsored event, so it was very laid back and easy going. There were families participating and I got my butt kicked by a few 12 year olds, one of whom finished the 800m swim in 12 minutes. The water was cold and very murky and much to my dismay, rather than swimming freestyle as I had planned, I couldn't seem to get my groove on and ended up swimming mostly breast stroke. Twenty-one minutes later I was out of the water and on my way. 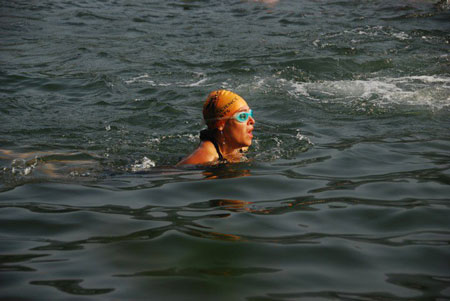 Because of the layout of the park, we had to run 1k to get to our bikes. My supportive husband jogged the 1k with me to the bikes and encouraged me on the way. The bike portion was 25k and so much harder than I expected. Nanjing is all hills, as opposed to Shanghai which is flat as a pancake. The course was absolutely beautiful and although the ride was hard, it was so much fun! I loved the camaraderie of the other participants. There were two dads racing with their 12 year old boys and it was great to see them side by side the entire race.

By the time I got to the second transition point I was pretty tired. I had worked hard to pace myself during the ride, but that was impossible to do because I had no way to really practice for all of the hills. Elizabeth (my friend and yoga instructor) was there to watch my bike and gear and yelled at me to keep going. My feet hit the pavement and I was off. I am the slowest runner ever and running after swimming and riding was pretty hard. However, my adrenaline was flowing and every-time someone passed me coming the opposite direction to the finish line, they were encouraging and nice. It was so helpful to have those friendly faces telling me I could do it. At the 4k mark (also the turnaround point), I slowed to a walk for about 100 ft. Then I picked it up again and just kept telling myself that I could finish. I knew I was one of the last runners because I only encountered a few people on my run back towards the finish line. I wanted to walk so badly, but refused to be the last finisher. I just kept willing myself to keep running and not to let anyone else pass me. 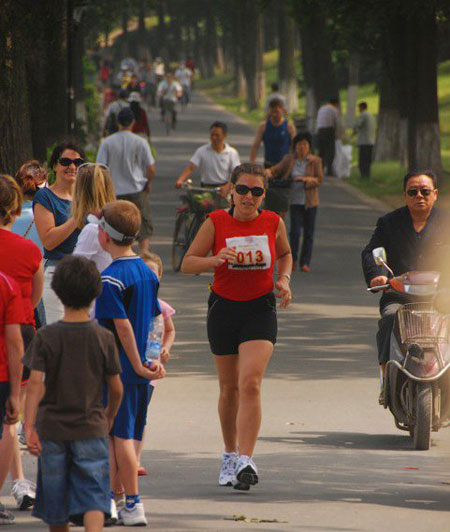 My friend Bryant was waiting with his kids about 100m from the finish line, where he yelled 'jaiyo' at me, giving me one last boost of encouragement. At that point, the four children joined in and ran with me to the finish line. I crossed the line, feeling exhausted, but so happy that I did it! My daughter asked me if I was going to stop all the swimming, biking and running since I finished the triathlon....HECK NO!!! I'm ready for the next one! 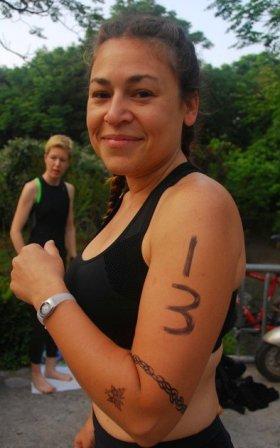