It had been a bucket list item for years...something to do before I'm 25. Okay, maybe I'll push that to 30. Crap. Okay, maybe I'll let it go altogether. You get sucked into life, your job, school, even someone else's definition of 'livin' the dream'.  Whatever it is you lose sight of those things that are always in the back of your mind. You lose sight of what it is you really want to do, who you really are, what it is that really makes you happy and feeling great.

When I registered for the first Girls Tri Too event of the year back in early February, I figured it would help with motivation to get back in the gym. It didn't. As the date became four months way, then three, then two, I figured that dream, again, was dead.

My last day at a job that slowly sucked two years of life out of me was March 26 and I started college full-time that following Monday - a plan that formed last November. I started walking to school everyday enjoying the stress-free life I was beginning and somewhere along the way, I began to feel happy again. My personal solitude helped to see the change that was going on inside. I finally accepted that fact that I am 33, single with no kids, overweight yet otherwise healthy and full of excuses.

Seven weeks to my first triathlon

I started following a beginner tri program I found on a website. As a result of how much training it was going to be and because of my weight, I was worried about injury even though I play occasional ice hockey, ride motorcycles and have worked out nearly my entire life as the big girl I am with no real injuries. Regardless, I followed the program exactly and didn't deviate from it in the least which was all aerobic and zero strength training (trust me...I know the importance of strength training, I just opted out of it for this first Tri).

Being college poor now actually worked in my benefit by putting productive and healthy food in my apartment while I stopped eating out saving a lot of cash. I gave my bicycle a tune-up, joined the YWCA to start swimming, bought a heart rate monitor, started actually taking my daily vitamin and began using the wonderful park that's next door to my apartment. I even started using the benefits of living in Columbus with our paved bike paths that span for miles and a lake to practice open water swimming, both which are free.

On June 5th, the day of the race, I woke up at 4:45 a.m. thinking "go back to sleep you have nothing to prove and no one will know". I used to listen to that person inside my head that made giving up okay. I got out of bed, finished packing my bag, filled my cooler with ice, toasted a bagel and spread it with raspberry jelly, grabbed a banana and headed to Deer Creek State Park in Mt. Sterling, Ohio. As I pulled into the park, for a quick moment I wish I had someone with me, but that quickly left my head. This was MY goal and it was personal which is why I decided against inviting anyone. I went to registration, picked up my transition area wristband, got body marked on my left arm with #120 and then wrapped a transponder around my ankle. I've never been a racer even though I've registered hundreds, maybe thousands, of motorcycle racers over the years. I smiled as I thought about that former life.

Although I was earlier than so many other people, three other women sharing the row with me were already setting up their transition area. The #120 was based on my projected swim time which, when I registered back in February, I had no clue and I believe I put in 30 minutes. Even though I severely overestimated my swim time, the good thing about that was I got to set up on the rack closest to the transition exit. All the girls around me were also new and it was refreshing. In this individual sport, we were a team of newbies. I set up my area thinking I had a good idea what I was doing, but really just winging it. I'd read plenty online, but until you're there doing it...you're actually clueless to what will work best. With this being a women's only event, the music they were playing was all women musicians...and Justin Timberlake. I understood the concept but when all the music was slow, including a Christmas song, it did little to pump you up. Being afraid I would have 'O Holy Night' stuck in my head for the duration of the race, I decided to head down to the water to get acclimated and warmed up away from the music. The water felt great and I was really diggin' the Danskin tri suit I was wearing. Buoyancy is amazing and I kind of felt like a cheater.

After the race meeting, we headed down the steep hill we would soon be running up for the start of the swim. It was a time trial start with two going at a time. The first two that went were sisters and their projected swim time was three minutes for 250 yards. I found myself daydreaming of the day I would be that fast, though probably not in this lifetime. As the line moved closer to the water, my nerves finally started kicking in which is normal for me. I am a 'believe it when I see it' kind of girl, so anything until that point means nothing which is why my nerves take so long to perk up. After the girl I was next to and I walked across the starting line, we ran and dove into the shallow water and began the first third of the race. I swam with a combination of freestyle and breast stroke but I never stood up or quit moving and I was proud of myself for that. As I rounded the last buoy to move towards the beach, I smiled through my heavy breaths and thought there is no way I’m running up that hill. I did end up jogging the second half. Although my swim time said 6:44 the hill was factored into the time - I think I was in/out of the water in just over five minutes. I love to swim and with more training and some lessons it will become my strongest piece of this pie.

People were cheering and the whole trip up the hill into transition was exciting...what a rush! I went to the front of my bike, grabbed my tiny towel, dried off my feet, threw on my shirt, helmet, shorts, socks and shoes - in that order, pulled my seat off the rack and started running with my bike to the exit. I felt great and hoped that my Schwinn Walmart Special Mountain bike would not hold me back against these girls on their road bikes.

Boy was I living in some sort of dreamland with that thought.

Before I even made it out of the park I was being passed like I was standing still. My legs were pumping and my heart rate was sky high and it got worse when we made that right out of the park and straight into headwind. Even though I was feeling okay, when you’re doing everything you can in the highest gear you have and you’re still getting passed...something's up. But whatever, I dealt with it and after four miles we finally got some tail wind and I was over the fact that I should have signed up for the Mountain Bike class. The last 3/4 mile had hills and I was so thankful I drove the course the day before to get myself prepared for the joy my legs were going to have by going up them. Some of the women who originally passed me got off and walked the last big hill, but I was determined to stay on and I did pass several people along the way. Sure, I couldn’t breathe and I had reached 100% heart rate, but I didn’t die so I guess that was a good sign.

Again, with the cheers heading into transition, I got pumped up by the rush. I racked the bike, dropped my helmet and walked with zest out of the transition area. My legs were talking to me at that point basically saying, "If you start running right now, I’m going to kick your butt." So I listened and walked until my breath, legs and heart rate got back in control which was about two tenths of a mile then I started to run. As I headed out, I was so glad to be on the final piece of the race before first place girl (remember the three minute swim sisters) crossed the line...I was only a half hour behind her. LOL

Once I started running, I didn't stop. I stayed consistent working on keeping my HR in check even though it was at 85-90% the entire time. The run was on grass on top of the dam. I didn’t mind it so much, but I did need to watch it a little bit since I’m notorious for turning my ankle on baby rocks. I cheered for the girls going the other way hoping it would help keep them motivated. After the turn around point, I noticed a couple of girls ahead of me about a quarter mile who smoked me on the bike. I wanted them! They were my motivation to pick it up a tad as they were going back and forth between a run and walk. When I reached the first one, she instantly started running. We were in the same Athena classification, based on our obvious physical indicators,  I knew what she was thinking, but because she had already allowed herself to walk I knew she would give up quickly which she did. It wasn’t until we were back on pavement before I reached the second girl and we were coming into the finish area. She too was walking when I passed her and she too started instantly running. We both picked it up, but as we rounded the last turn to the finish, I rose to 100% and pulled on her as I started to sprint. I was little worried I started sprinting too soon and wouldn’t make it to the finish, but as I crossed the line, the announcer called out my name solidifying my goal of finishing a triathlon.

Seven weeks ago I stopped making excuses for myself and became determined to do a triathlon. What's changed from that original thought? Though it is no longer a bucket list item...I am now a triathlete and I want more. I want a better bike so I can train harder and better. I want to be able to swim 250 yards in three minutes. I want to be able to get back to running two miles in less than 18 minutes and maybe even become a runner for the first time in my post military life. I want to do a real Sprint Tri and I want to finish in the Top 10 in my classification or better yet go home with a medal. I want to drop even more weight than the unexpected 20 that I already have lost. There are so many goals to keep aiming for...this is definitely not over. 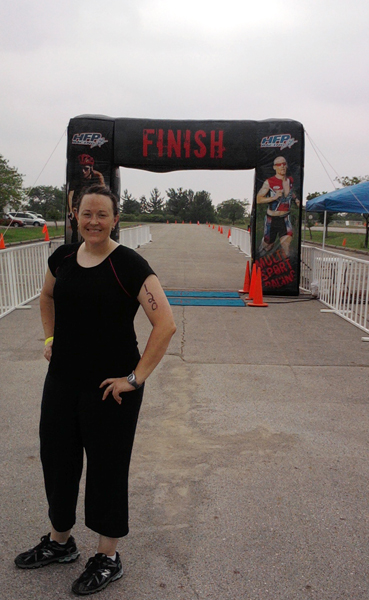