Thousands of strokes, cranks and pushes later, I did my first sprint triathlon as a wheelchair racer. What a blast!

I was diagnosed with multiple sclerosis 16 years ago and started using a wheelchair only a few years later. At the time, I was told to take it easy, that exercise would exacerbate my symptoms. As a life-long couch potato, I had no trouble following this medical advice! My weight ballooned, my ability to walk and take care of myself plummeted, and things looked pretty grim.

Luckily my husband and kids are wonderful examples of the benefits of exercise. My husband runs marathons and does triathlons, and my kids are all competitive swimmers. After cheering for them in dozens of triathlons, I decided I wanted to do the next one with them, our hometown sprint triathlon. I had already worked to lose a great deal of weight over an eight year period, and had started regular strength training two years before.

So how does a wheelchair user do a triathlon?

Swimming doesn't require much adaptation, but I needed to learn to swim the right way (you know, with goggles, and your head in the water). I started in September with a beginning adult class, and by January was swimming (in the sloooow lane) with the Masters. To swim I either strap on a pull buoy or wear wetsuit leggings (DeSoto SpeedTube) so that my legs don't drag me down. Thanks to my good strength training base, I am able to pull myself out of the water pretty easily.

The wheelchair equivalent of a bicycle is a handcycle, a three wheeler with gears that you crank with your arms. Over the summer I got together with other handcyclists to do weekend rides and learned how to shift, how to attack hills, and built up endurance. One of my new riding buddies is also a handcycle mechanic, and he helped fit the bike to me better, and modified the shifters and brakes so that they were easier for me to use.

The wheelchair equivalent of running is using a racing wheelchair. This is also a three wheeler, but is totally arm powered. Whereas the handcycle rider is almost reclining, in the racing wheelchair you are crouched over your knees, your upper body almost parallel to the road, and you propel the chair by hitting the handrims and shoving down hard. Racing wheelchairs are custom made and very expensive, and require a very different technique than pushing an every day wheelchair. I didn't have one.

An alternative would have been to just do the run portion in my every day chair. I had already done a 10K that way, and it was frustrating. An every day chair is just not meant for speed, even the ultralight sporty looking ones. Over the Summer and Fall I explored the possibilities for either borrowing a chair or getting the expense covered by a grant, but nothing worked out. Finally my husband and I took deep breaths and decided to go ahead and buy one - a commitment to continued activity and health. The racing chair was delivered in the beginning of December and sat in my dining room mocking me until the snow melted in late March.

I joined our local Paralympic Sport club (sponsored and funded by the city of Boulder, Colorado's EXPAND Program) and began training with the racing chair. It was very frustrating for the first month - I'm sure anyone who is coming fresh into a sport requiring a very specific physical technique has had the same experience. But by late April I realized that I was starting to feel, if not competent, at least not totally out of my element. The final pre-triathlon test of my racing wheelchair abilities was participating in the pro wheelchair wave of the Bolder Boulder 10K at the end of May. I came in last of 17 wheelchair racers, but so much faster than I thought I would! Onto the triathlon! 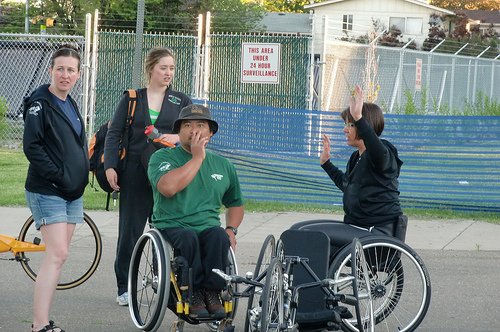 [Before the triathlon: EXPAND coach Jacob Heilveil and I work on logistics for racking all the handcycles and racing chairs]

Four wheelchair athletes had entered the race, so the Race Director created the first-ever wheelchair division for this event. For the 525 yard pool swim, she heated all of us first (so that we could get out on the road before it got too crowded) and let us split two lanes (so that we didn't have to worry about our speed disparities). The swim went well. I felt like I was swimming very slowly and deliberately - I didn't want to panic and screw up somehow. I was the second one out of the water for my heat.

The bike course was a four mile street loop, done three times. My daughter and some of the EXPAND volunteers were ready to get me into my shorts, shoes, sunglasses and helmet and out onto the course. The other guy was slow getting going, so I was the first one out. I discovered at the top of the first hill that my brake was on, even though "check brake" was on our checklist! I wasn’t overtaken for about two miles. The volunteers on the course were all very supportive – lots of cowbells. The other three wheelchair competitors all overtook me at some point on the bike ride (not unexpected). 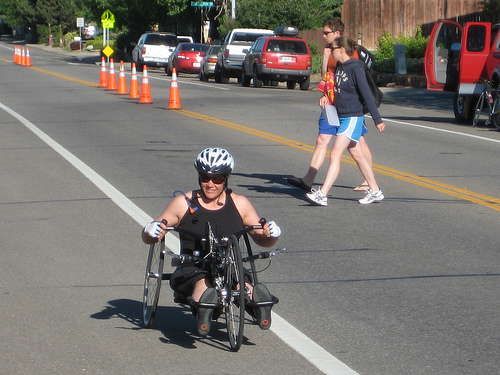 [Third time around on the bike - not looking too grim!]

When I came into the transition area after the bike, I was last (among wheelchairs), so everyone was very eager for me to get going and try to catch someone. But I really had to pee at this point! My daughter got my every day chair, and I got into the port-a-potty. The port-a-potty was on a sidewalk, with maybe 28″ between it and the curb. The door was very tightly sprung. Getting out I was trying to push the door open while at the same time not falling over the curb, and I fell over backwards, wheelchair and all. The door slammed shut on my head. Thank goodness I was still wearing my helmet! (Yeah, no picture of me sprawled half in and half out of the port-a-potty.)

Everybody hauled me up and stuffed me back into the racing wheelchair.

The run segment was three miles and they felt really, really short. It seemed like no time when I was back at the finish line. It also felt good to get in the racing chair and sort of stretch out everything that was all cramped up from the handcycle. Afterwards I told my coach and the others that maybe I liked racing better than handcycling, which is a big change from my first month racing.

Oh, I came in last (of course), but not by much (3 minutes – shouldn’t have peed!). My time was 2:00:00. After my race I hung around trying to get pictures of everybody else in my family.

What a great experience! Having the EXPAND volunteers around to help was fantastic, and the Race Director's willingness to incorporate wheelchair athletes was really appreciated. I'm ready to figure out what my next event is going to be. 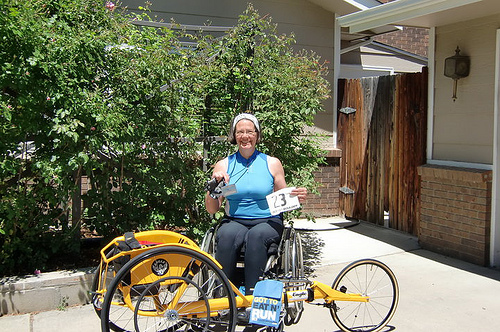