From the bar to the bike and the beach. I decided that for my 34th birthday, I was going to buy myself a new bike...something to get my butt in shape.

Go to the bar or go to the workout?

It all started late last summer, I was looking back at what my life had become over the past few years.  I figured out that I was one of the citie's biggest bar-stars, going out 4-6 nights a week, somehow staying out until 2am and getting up in the morning, going to work, then doing it all again the next night.  I felt like my life was a treadmill, I was constantly moving, but not going anywhere.  Boy, did I learn that the metaphor I was using was way, way wrong once I actually got ON the treadmill.  I decided that for my 34th birthday, I was going to buy myself a new bike...something to get my butt in shape.  Luckily for me, I have a buddy whose family owns the LBS.  I talked to him and picked out my new roadie.

Fast forward a couple months, one of my friends introduced me to BT, as a way to log my rides, and I started reading all I could about riding and bike workouts.  We started discussing her interest in finding a couple tri's to train for this coming summer.  I thought about it, and figured, why not give it a shot?  I was LOVING the bike and I was a decent swimmer in High School, I needed something positive to get me through the winter doldrums here in Michigan.  It was at that point that I decided that when the next year rolled around, I would turn my life around and instead of constant bar-hopping, I would focus my energy on getting myself in shape for a race.  There are only a couple gyms in town with a pool for lap swimming, so I got a membership there as a Christmas present from my parents (who were very happy I was doing something other than going out every night).  January 2 was the first day I started my training.

Now one thing I forgot to mention in the last paragraph...I HATE running.  Some people think they do because they had to run a lot for a High School sport or they have bad knees, but I just never understood the fun in running.  I had a serious aversion to it, and even when I started my workouts, I could not change my tune.  I was back in the pool, able to put in a mile or so with relative ease in my workouts, and although I disliked the trainer, I muddled through the workouts (most of the time).  When March rolled around, Mother Nature toyed with my emotions and gave us a few nice days here in Michigan.  I started running outdoors, and amazingly enough, really liked it!  I signed up for my first 5K a couple weeks later.  After the first one, I was hooked and started looking for more. I even signed up for a 10K three weeks before my first triathlon.

At this time, most of my old "bar friends" were starting to wonder what was going on with me.  I was at the point where I might go out once a weekend, if I could work my training around it.  They called, texted, emailed, facebook'd...all wondering why I was missing out on all the big bar nights.  Most of them knew what I was doing, but I just stuck to the workouts.

As early summer rolled around, I started getting nervous for what was coming at the end of the month.  Finally, the big weekend.  The group putting the race on did a "multisport 101" the day before the race, but luckily for me, it was like old news because of what I had read on BT.

It was race morning, I woke up around 4:45 (and by wake up, I mean finally get out of bed because I barely slept that night) and made it my goal to be there around 6:15.  The race was only about 20 miles from home, which was nice.  I got there, body marked and set up my transition area.  This is where I was very happy that I read the things I read on this site.  I got set up and started socializing (yeah yeah yeah, I know, I should've been warming up).  I was in the last wave, so I watched the Oly guys and ladies take off and decided to put on my wetsuit.  I had only open water swam one time prior, but I felt pretty good about my chances of not drowning.  Having read the articles about wave starts, I was a little worried, but I knew I was strong enough in the swim that I belonged somewhere near the front.  Finally, the horn went off and I was off.  It was just a 500m triangle swim, I went out a little hard and ended up breaststroking around the first buoy, but I was near the lead.  I had a little trouble sighting on the long straightaway, so I flipped over to my back for a little bit and found that much easier.  I made the turn for home and swam in.  My goal for the swim had been under 10 minutes, and as I exited the water, my dad was standing there telling me I beat it.  The run to the transition area was a grassy uphill that was soaking wet, so I took it easy getting out.  I got to my spot, all set up perfectly.  I had kept my shoes on the pedals, having practiced hopping on, I figured that it would be better than sliding on my butt with my cleats.  What I didn't realize was that I never practiced with WET feet.  As I threw my leg over the bar and put my foot on the shoe, I feel myself slipping.  About 20 feet from my parents, I lose my footing and almost slip down onto the top bar...I know my mom had to be thinking, "Oh great, there goes the chance of any grandkids from him." Luckily, I didn't do anything too catastrophic. I finally got on the pedals and took off.

The bike was advertised as a flat ride and the day before I had driven the course, it didn't seem too bad, I thought 19-20 miles per hour was definitely possible.  I got going on the bike and just couldn't get the feel in my legs to keep the pedals moving right.  The long two mile, slow steady climb on the back stretch just took everything out of me.  I felt relieved when I noticed that the volunteers were at the wrong corner, turning everyone down the road before...that means we weren't going to hit the BIG hill.  It cut about a mile off the ride, but at this point, I was happy for any reprieve.  I got into the park, got out of my shoes and dismounted...time for the run.

Now as I mentioned before, I hated running when I started this training.  Now, I was getting ready to go on a trail/paved run with legs that felt like jello, and feet that felt like cement blocks.  Oh Boy!  I made sure I ran hard coming out of transition, the vanity in me telling myself to "look good," even though I hurt.  The legs loosened up a little, and I only had to walk a couple times after some climbs.  As I came to the final aid station, I knew I only had a half mile to go, so I sucked it up and dropped the hammer (which at this point, was more like rubber mallet) and told myself I HAD to finish strong.

I came up the final hill, the finish line only 50 yards ahead.  This was the moment I had been training for five months for...I was going to be able to say those three words with pride.  I'M A TRIATHLETE!  I was so excited that I didn't even care about water or anything else.  As cheesy as it sounds, all I wanted was that finisher medal!  I didn't quite hit my overall goal, but I was hooked.

A couple weeks later, and I've now decided to up my efforts, pushing for an Olympic distance at the end of the season.  I've also put plans in motion to run a half mary by the end of the year.  Amazing how someone who HATED running five months ago has been so transformed by this sport that I actually love it now.  I want to put in writing my thanks to my parents and friends who stood (and are still standing) behind me in my quest to better myself. 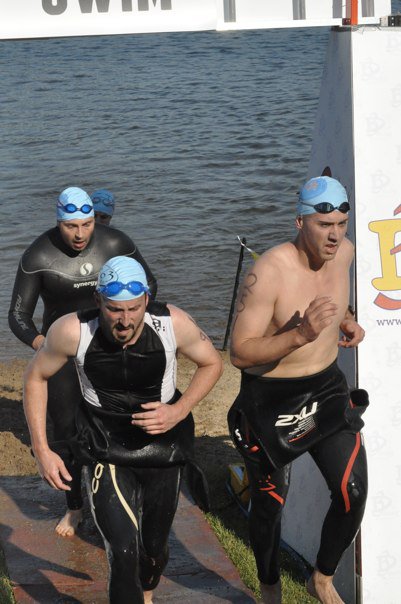 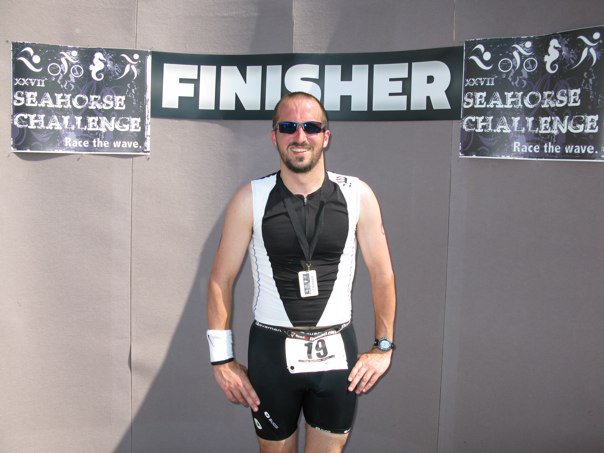