This was my 2nd time training but 1st time competing in the Naperville Sprint Triathlon!

I had set my eyes on the Naperville all women's sprint triathlon four years ago and I trained with a beginner's training program from beginnertriathlete.com for four months for the 750k swim, 14 mile bike, and 5k run. Cut to a week before the race, and I get the biggest news of my life...I'm pregnant! Although obviously I was ecstatic and am ecstatic to be a mom to my beautiful 16 month old son Luca, I was also severely disappointed that I had trained so hard for a race I now could not do.

I ended up going from being in the best shape of my life to gaining a whopping total of 70 (yes 70!) pounds with my son. My hopes for ever being an athletic person again slowly flew right out the window. However, last summer I decided that I still had that fight in me, and attempted to start running again...I still remember the first time I ran a full mile without stopping (which seems so easy now!), and what an accomplishment it was! My mantra while I ran was, "this is not anywhere near as painful as giving birth, suck it up and keep going."  Although I had lost about 40 pounds, my weightloss had stalled along with my will to keep trying. So last winter, in December, after a few months of hibernating and eating well (as in plentiful), I got the at-the-time ridiculous notion that I should attempt the same exact triathlon again. I figured it would not only help me get back into the shape I used to be, but most importantly, I had a hurt pride that definitely needed to be restored.

I kept this idea to myself while getting all of the details and training schedules into place, and once I signed up for the race and paid for it, I let everyone know that I was going to do it, so now I definitely could not back down. The first few runs that I did were a nightmare for me, and I still was overweight and thought I was crazy for attempting this. It's one thing to attempt it when you are already in decent shape, but having just had a baby and feeling fat as a cow was an entirely different story. There was one good thing I had to fall on though...my discipline. I have excellent endurance, and a discipline that would scare some school teachers and mothers of 5+ kids.

I kept pushing, and was pleasantly surprised to find out that since giving birth to my son, my endurance for whatever reason was a lot better than it was when I was training before. I had always logged my workouts on runnersworld.com, and going over the data from two years ago to now, I was 30 pounds heavier now but could run/bike/and swim faster and longer NOW than I could THEN...that still baffles me.

I started my training in January and trained for six months, putting in about two hours a day 4-5 days a week. It ended up being some nice alone time for myself and a break from my life, as silly as that sounds. As my training progressed, so did my competitive side.  I didn't want to just complete the triathlon, I wanted to compete. And compete I did...I finished in 1:45:56 (14 minutes under my goal of 2 hours)...did the swim in 15:45, the bike in 50 minutes, and the run in 29 minutes. There were definitely many moments during the race where I had the, "what the hell am I doing?!?!" panic running through my head, but I calmed myself by thinking of it as a long workout...and picked out people ahead of me to pass along the way. I was way too tired at the end of the race to relish in my accomplishment, but now two days later, I am looking back and feeling extremely happy and satisfied that I finally completed something I set out two years ago to do. I lost 15 pounds in the process (only have 15 more to get back to my pre-baby weight!), and already have planned another sprint race. I have my training plan mapped out, and start about 30 minutes from now (another benefit of my hard training...I wasn't sore after the race...at all!)...let's just say, I am one happy momma! 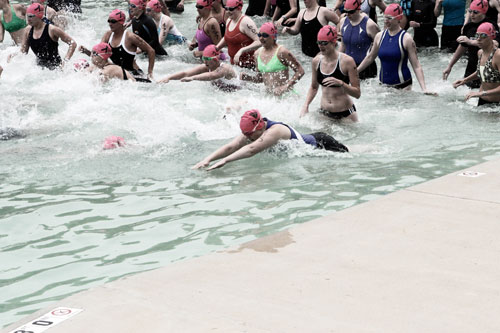 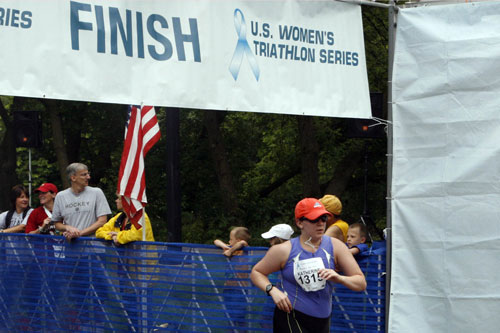 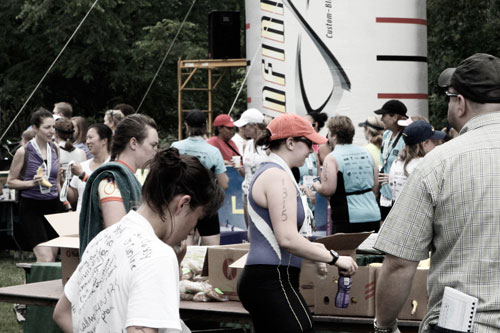