Amazingly, they did not have to drag the lake for my drowned corpse.

The roots of an obsession

If I were to trace my interest in triathlon back to its earliest roots, the moment the flint hit the steel would have been in 4rth grade when someone from the IronKids Triathlon came to my school and gave a presentation. The idea was to get us to sign up, but I remember sitting there in absolute awe. Surely no one could travel those distances: 150-yard swim, 4-mile bike and 1-mile run! A 5th grade girl I knew signed up. She lived in my neighborhood and was a rival of mine in our karate class. We could have been friends, since we were both scab-kneed tomboys, but instead she liked to bully me. She went on to win medals and compete in triathlons in high school, and I always harbored a feeling of regret that I had not signed up back in grade 4.

Fast forward to 2005. I had graduated college, was drifting amilessly trying to launch a career with a worthless degree, and I was losing my slim figure I had long taken for granted. I began jogging, but could barely go a block. After adopting a puppy, I ran longer and more frequently. One day I read somewhere that signing up for a race was a great way to inspire yourself, so I signed up for a half marathon. I trained and finished the half without stopping to walk at all. Feeling on top of the world, thoughts of the triathlon came rushing back. One day, as I perused race websites, I feverishly and recklessly registered for the Tri for a Cure - knowing they had swim buddies.

My friends and family were skeptical. I was, too. I didn't know how to swim! I started going to the lake to side stroke around. A triathlete friend gave me one swimming lesson but quickly gave up on me. After hours of side stroking, I was probably taller on one side than the other, but I could go the distance necessary (just barely). I rode my cheap women's mountain bike 20 miles to work a few times, and ran like usual. I bought goggles and my first swim cap, and felt like I could at least survive.

Dressed in a discount trisuit I found online, I sat nervously in my boyfriend's truck as he drove me to the reservior. "That's my daughter in the water" played on the radio and I turned my head as tears of terror filled my eyes. I did NOT want to go in the water! Oh well, I could get a swim buddy if I needed one.

It turned out that my wave didn't start for hours, as this is a HUGE race. I paced around, watching the waves start, feeling sick when I looked at how far away those buoys were. How am I going to do this? Butterflies in the stomach turned into wasps. The ladies in the transition area around me all came with a pack of besties, and I was all alone. One gal had a brand new tri bike with aerobars, the first I had ever seen. I was surprised when I overheard her say that this was her first tri.

Finally, my wave was called to go next. There were others who were nervous, like me, which helped a lot for my mental state. As we waddled to the edge of the water on the corrugated cement of the boat launch ramp, I decided I would not use a swim buddy. There was a big countdown, and suddenly it was time! I took my time, got in the warm water slowly, and began my side stroke. Well, you can imagine how tiring this was! My arms and neck began to tighten. I stopped and clung to the water noodle of a swim buddy who was bobbing along the side of the course. Thank goodness! I thrashed and stroked to the next noodle, and the next. I did not see anyone in a silver cap anymore. The next waves came out and swam over and around me, as I clung and scooted, gasped and flailed. I did see one other silver-cap--a woman who appeared to be treading water the whole way! She was swimming vertically and having a harder time than me. How on Earth did she get in front of me to begin with? Scoot, cling, shuffle, and finally a voice shouted "stand up and run!" I was alive! I stumbled out of the water exhausted but ecstatic!

I did not hurry in the transition area. I put on a shirt and pinned my number on (note to self: this can be done ahead of time). I put on my helmet and walked my heavy old mountian bike to the exit. When I hopped on my bike, I had feelings of pure relief and joy. You can't drown on a bike! I pedaled as hard as I could, my joy fueling me. I passed a lot of people, which was amazing considering my equipment! I passed some road bikes, and decided that I would buy myself one after this was done. I dropped my water bottle on the course, but kept going.

When I arrived back at transition, I put on my cap and hit the road. I did not need to change shoes, so this was a really fast transition. Oooh boy, did my legs feel tight and heavy. My hamstrings were in a vice grip. This did not feel so good. My elation from surviving the swim disappeared. Running was supposed to be the easy part! I heaved myself up the big hill, around the turnaround, and willed my legs to go a little faster. The run was only three miles, but it felt like an eternity.

At last, I heard Melissa Ethridge's throaty voice pounding through my mental fog. I must be near the finish! I pressed a little harder and crossed the finish line. Tears of relief briefly welled up, but I banished them. My boyfriend was waiting at the finish. We went home, took a long nap, and for a week afterward I kept thinking "I can't believe I did that!" I was dead last in my age group for the swim, but I was not dead!

Three years later, I am doing my 6th triathlon this afternoon with a real road bike (clipless pedals even!) I know how to swim after taking lessons and clinics, and I am hoping for an age group award. I got totally hooked that day, despite the scoot-and-shuffle style non-swimming. I love this sport, and at the risk of sounding cliche, if I can do it, so can you! 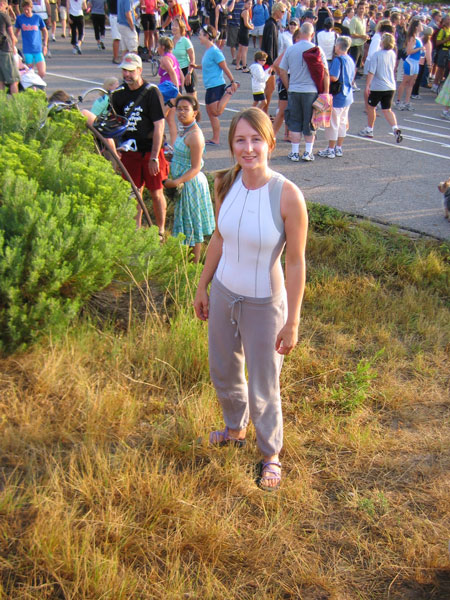