Overweight But Not Out Of Place

I thought I'd feel out of place among triathletes - until I realized I was one.

My first triathlon was the Mountaineer Triathlon in Morgantown, WV.  With sprint, olympic, and half-Ironman distances, the race draws a lot participants from many areas, and most of these folks are serious athletes.  As a total beginner with still a lot of extra weight to lose, I knew I’d feel out of place but I was determined to prove myself.  What surprised me most was the support, encouragement, and positive energy I felt from from every angle on race day – even from strangers.

I spent most of my life being lazy, and the entirety of my adult life overweight.  I never would have believed I could become a triathlete.  A couple of years ago I took up running for weightloss.  By the beginning of this summer, I'd lost over 100 pounds but had become bored with my routine.  My weightloss plateaued and I felt my motivation stalling.  The idea to do a triathlon started as a pipe dream, but I did some research, found a training plan, and started to think it might be possible.  I started swimming and cycling, which were so much more fun than running that I became addicted to both.

I didn't follow my training plan very carefully.  Specifically, I slacked on the running.  But I swam for 30 minutes every weekday before work and usually fit in another workout during the day, either biking or running, sometimes directly after the swim but usually in the evening.  I always jogged at least a mile or so after every bike ride, to get my legs used to the switch, but I never did the full race distance in succession.

Race day was a Sunday.  I took Friday and Saturday off from all exercise and focused on eating well (high protein and veggies, some brown rice, limited sugar) and drinking lots of water.  I was remarkably lazy, which was a welcome change because I trained pretty hard in the last week.

My amazingly supportive boyfriend Chris told me we had lunch reservations on Saturday at noon.  This was a bit confusing, but I went with it – he said it was a surprise.  It turned out he had actually scheduled me for a “pre-race massage” at a health spa.  Initially I was concerned because every time I’ve gotten massage therapy, I’ve felt sore and tender the next day, but this was a light-intensity massage with shallow, quick strokes and gentle stretching.  It stimulated my muscles without working them, and it was relaxing to boot.  I will absolutely do this again next time without hesitation.  In addition to calming my nerves and making me feel like a million bucks, the massage also allowed me some meditative time to mentally prepare.

I slept well on Saturday night and woke up just before my alarm, which was set for 5:46am.  I was surprised at how calm I felt.  I had laid out my gear the night before, so getting ready was quick.  I munched a PowerBar and drank some water in the car on the way, with Chris snapping photos and videos to document the experience for my family (who wanted to be there, but couldn’t).  I’m pretty sure I’m yawning in about 30% of the photos – partly because I was tired, but also because it’s a nervous habit for me.

I got my timing chip and body marking done at 6:15 and then set up my transition area, which left more than an hour before my heat at 7:35.  We sat on a concrete wall and people-watched.  This was the worst part of the day – the time craaaaawled.  We watched the other athletes take off in their various heats starting at 7am, and I slurped up some Gatorade pre-game gel.

It was a deep-water start in the Monongahela River, and the sprint distance course went upstream for about a hundred yards, then looped a buoy and headed downstream for the remainder.  At 7:35, I was off.  There was no noticeable current.  I focused on pacing myself – stroke, stroke, stroke, breathe – with a heads-up to make sure I was swimming straight every couple of minutes.  I had done a few open-water swims in a lake, but most of my swim training took place in a lap pool every morning with a “water treadmill” (a lane with a current that you can set to varying strengths).  In the end I think this probably helped me develop a nice straight stroke, because I swam quite straight even without the black line to guide me.  Later, Chris would show me a video of a girl only about 50 meters out from the starting line, backstroking at a wildly divergent angle from the course and then getting turned around entirely.  It took her awhile to get oriented, but there were no DNFs so she must have figured it out eventually! 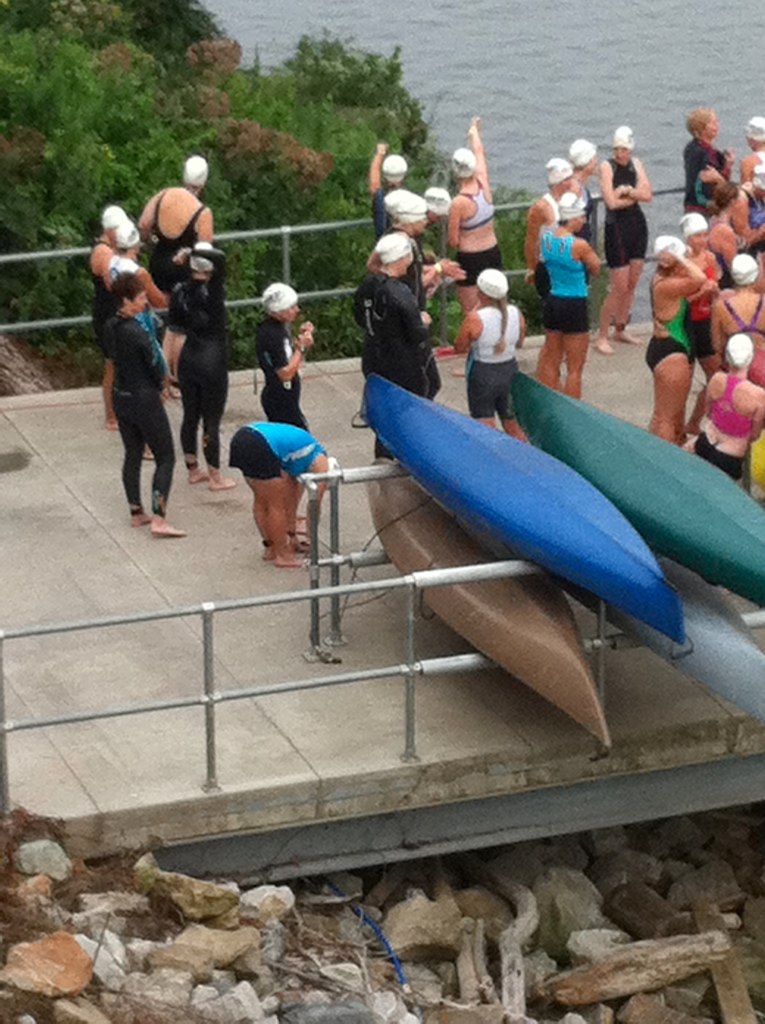 My best time in training was just under 17 minutes, so I was hoping to remain under 20 on race day.  Looking back, I could have pushed much harder.  But you know, when I first swam the 750m distance, it took me almost 40 minutes!  And I’ve only been swimming athletically for a few months.  Progress is progress.

What a dismal transition time!  I’ll find a more efficient way to dress for my next triathlon.  I made the mistake of changing clothes entirely, and the difficulty I had pulling a dry sports bra onto my wet body did cost me lots of valuable time.  Next time I’ll probably just wear it under my swimsuit.

I felt a little wobbly getting onto my bike.  Clipping into the pedals still makes me nervous (I’ve only been doing this for a few months too, and I’ve had some nasty falls) and my balance felt off.  Plus there were a lot of spectators at this point, so I felt shaky, and there was a split second where I was sure I was going flat down on the concrete in front of everybody.  As I struggled to clip in, someone on the side said calmly, “Take your time, you’ve got all the time in the world,” and that helped immensely.

The course was all paved, part rail-trail and part road, with just a couple of gentle hills.  I’d never ridden with road traffic before, and this made me a bit nervous, but police had the busiest sections blocked off.  There was a point around mile five where I had my one flash of doubt.  I was on an incline and my legs were burning, and I felt myself begin to think, “I can’t do this.”  I actually shook my head quickly and pictured the thought leaving out my ears, and decided to focus on the beautiful weather and scenery.  I listened to the rhythm of my bike and thought with each rotation of my legs, “I can...I will...” and the second half of the bike portion flew by.

One woman left the transition area right before me, then I passed her and was ahead of her for most of the bike, then she passed me again right at the end of the route.  She complimented my pace as she passed and then found me again at the finish line to congratulate me.  That felt pretty awesome, and so flattering.

In the end, I’m most proud of my bike time, which was actually almost competitive.  I give a lot of credit to the bike itself, which is an old Norco triathlon bike that I purchased used for $100 and spent some money fixing up.  I only got passed twice on the bike route, but I passed lots of folks, most of whom were riding mountain bikes or hybrids.  I’m glad I lucked into finding such an efficient machine at such a good price.

I knew the run would be my weakest leg of the triathlon, especially since I’d been slacking in training for that area.  I figured I could make it through the swim and bike, and then the worst-case scenario, walk (or crawl) the 5K.  I surprised myself here too, with a somewhat respectable time (for me).  I got a lot of help and encouragement from other racers and spectators who were saying kind things.  I even had one woman come up behind me while I was walking and say, “Come on, run with me, we can do this,” and we ran together and chatted for awhile before I got a stitch in my side and had to switch back to speedwalking.  With about a mile to go I realized I was actually going to finish the darn thing and got a dopey grin on my face that lasted the rest of the race.  Well, the rest of the day. 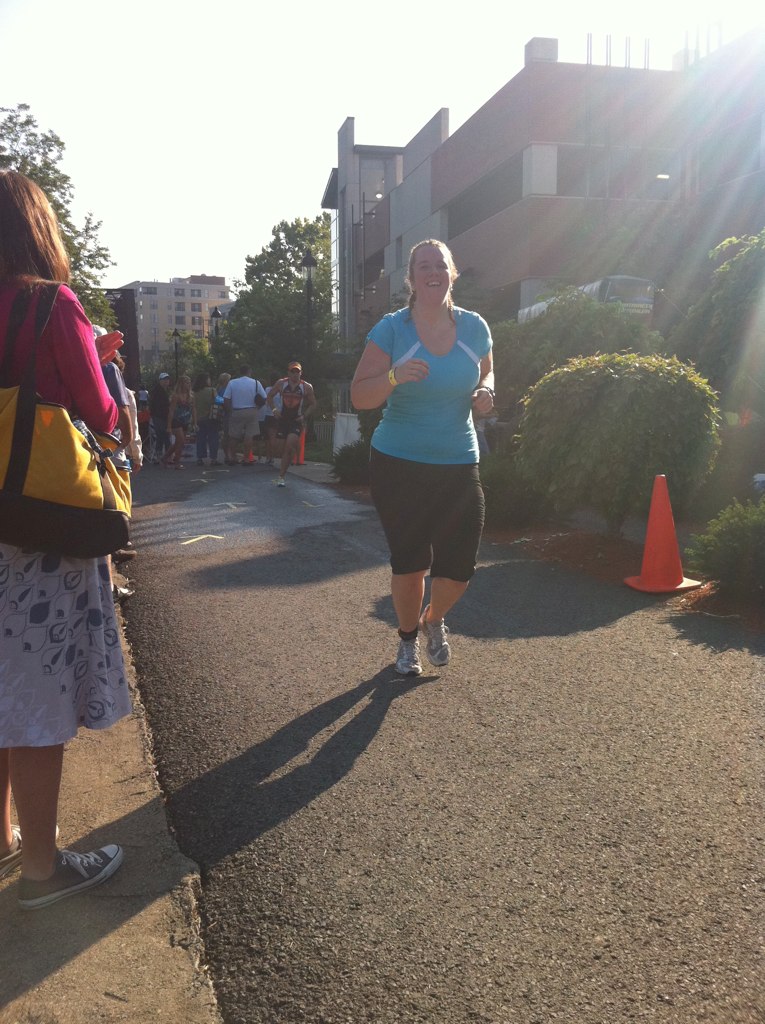 I can't even describe the feeling of crossing that finish line.  A few months ago I was perusing these stories and wondering whether I should take on the challenge.  I'm so grateful that I stopped wondering and started training, and that I had such supportive people in my life to encourage me.  I had so much fun that I'm signed up for another triathlon in just three weeks, and I'm already researching a training schedule for the olympic distance next summer.  Or maybe I'll go for the half Ironman.  Whatever I decide to do, I know that I can train for it - I’ve got all the time in the world. 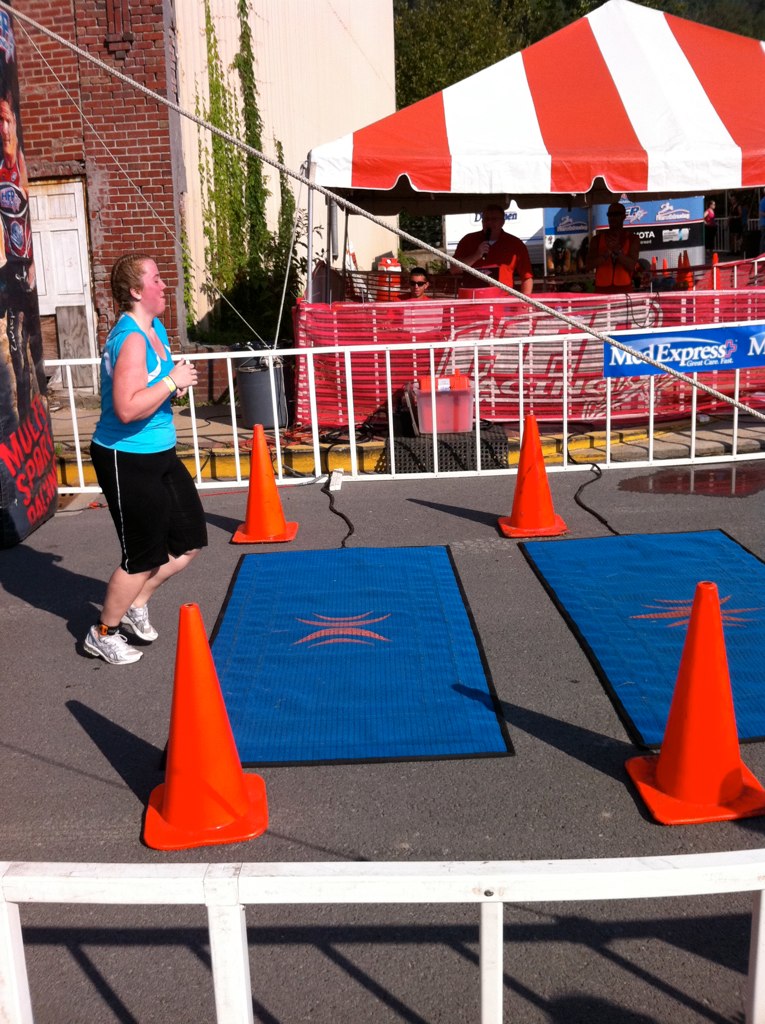